Ditch the crowded streets of Rome or Milan and head to Italy’s picturesque countryside.

Get your fill of wine, rolling hills and medieval architecture as you explore these quaint Tuscan locales.
You could easily spend years wandering through Tuscany’s charming villages and spectacular landscapes. Each spot is unique in its own right, yet there is a continuity throughout this central Italian region. Most of these towns and cities shine the brightest in spring and fall, when average temperatures sit in the 70s. No matter which of these 13 can’t-miss destinations you choose to visit, you’ll want to bring your walking shoes (most of these locales restrict vehicles inside their walls), a thirst for wine, an empty stomach and a love for history. (Getty Images)

San Gimignano
A quaint medieval town that’s popular with tourists, San Gimignano is a UNESCO World Heritage Site that once featured 65 towers built by wealthy families, though only 13 remain today. Must-see attractions include the Piazza della Cisterna, the 12th-century Duomo di San Gimignano and the Via Francigena, an ancient Christian pilgrimage route that runs through town. San Gimignano also offers various restaurants and shops, many of which fill with visitors in the afternoon when tour buses arrive. For a quieter atmosphere, rent a room in one of the town’s ancient buildings through a vacation rental company like HomeAway or VRBO. (Getty Images) 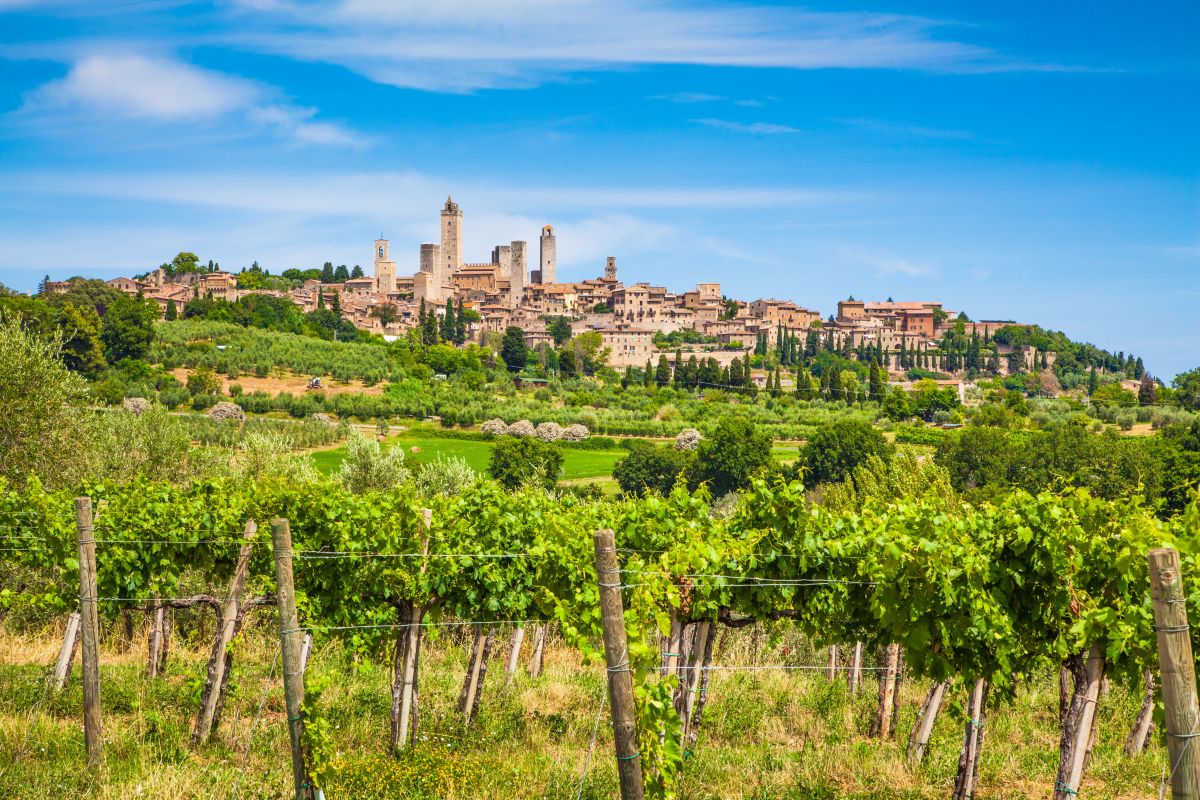 Arezzo
Older than Alexandria, Egypt, Arezzo was once a key city for the Etruscans and the Roman Empire. In addition to featuring the ruins of a first-century Roman amphitheater, the ancient city is home to a fortress built by the Medici family, the birthplace of 14th-century poet Petrarch and the Duomo di Arezzo (a Gothic church with many works of art). Plus, Arezzo hosts numerous annual food festivals celebrating everything from pizza to pasta to snails. When you’re ready to retire for the night, consider the charming and historic Graziella Patio Hotel by the Basilica of St. Francis. (Getty Images) 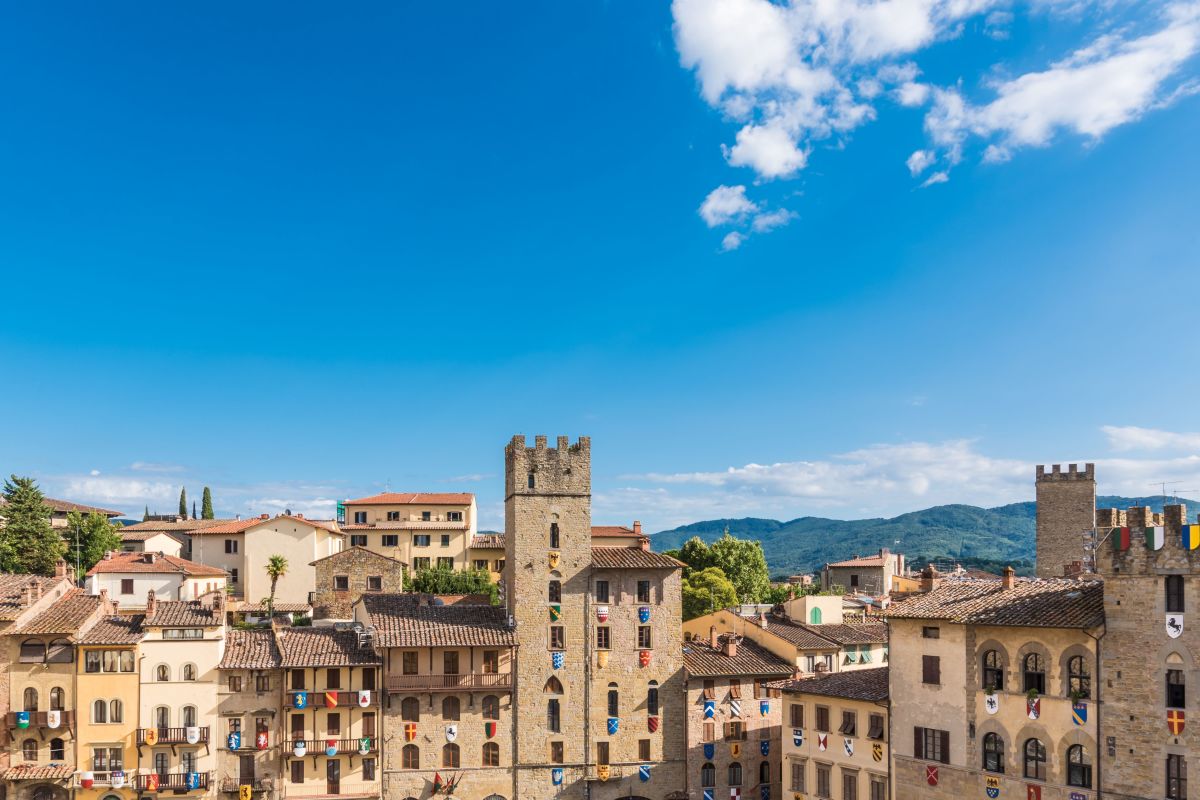 Siena
Siena still looks much the way it did when it rivaled Florence in importance in the 1300s. Hang out with locals, tourists and University of Siena students in the expansive Piazza del Campo, then climb the Torre del Mangia bell tower’s 400-plus steps for incredible city views. Follow that up with a visit to the Romanesque-Gothic Duomo di Siena, which features striking dark and light striped columns. Don’t forget to save time for Santa Maria della Scala, a former hospital for Christian pilgrims. And if possible, time your visit during the twice-yearly Palio, an amazing piazza horse race among the city’s neighborhoods. Make your home in Siena the Belmond Castello di Casole, a 10th-century castle with a pool, spa and vineyard. (Getty Images) 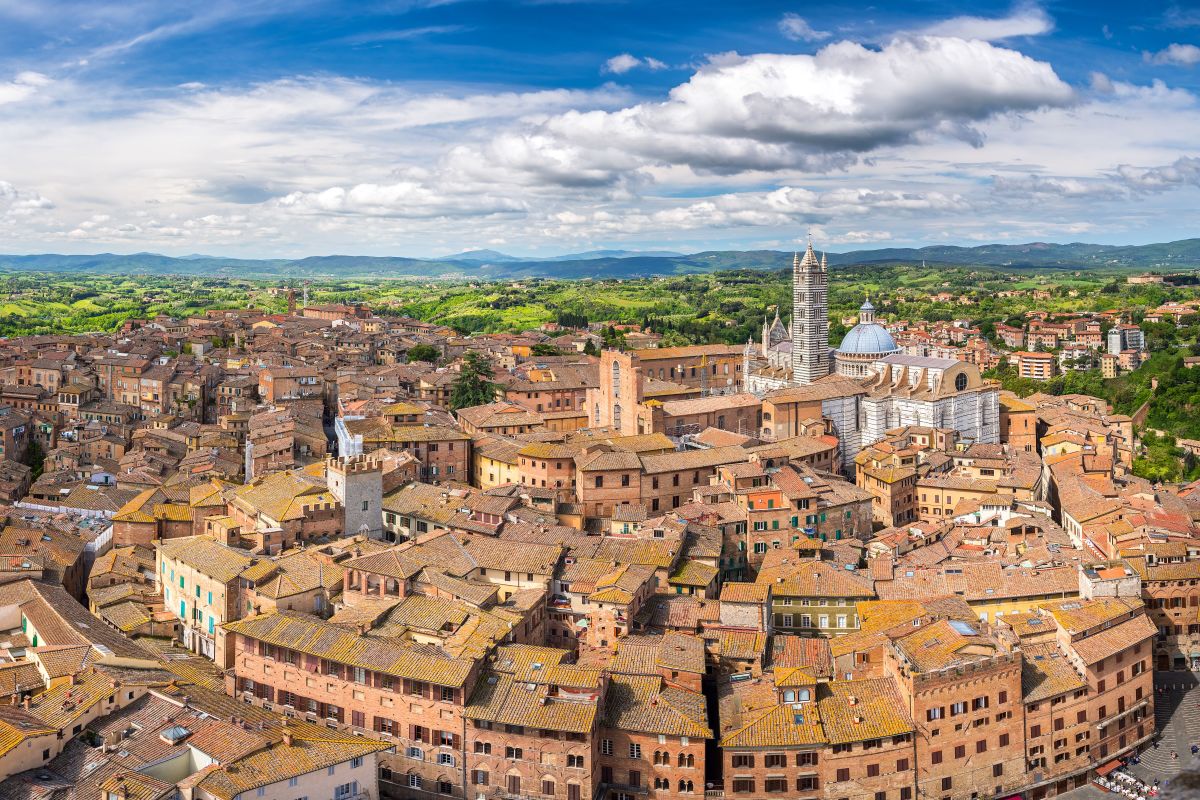 Lucca
Most famous for its circular, 2.6-mile-long wall built in the 17th, 18th and 19th centuries, Lucca overlooks the Serchio River in northern Tuscany. Inside the city, travelers will find a first-century Roman amphitheater that once hosted gladiator games, as well as churches like the Piazza San Martino-facing Duomo di San Martino. When visitors are not admiring one of Lucca’s cathedrals, they can climb to the top of the Guinigi Tower to gaze at its unusual garden of oak trees and the surrounding city. Lucca even hosts an event every fall where attendees wear costumes inspired by musicians, video games, cartoons and more. (Getty Images) 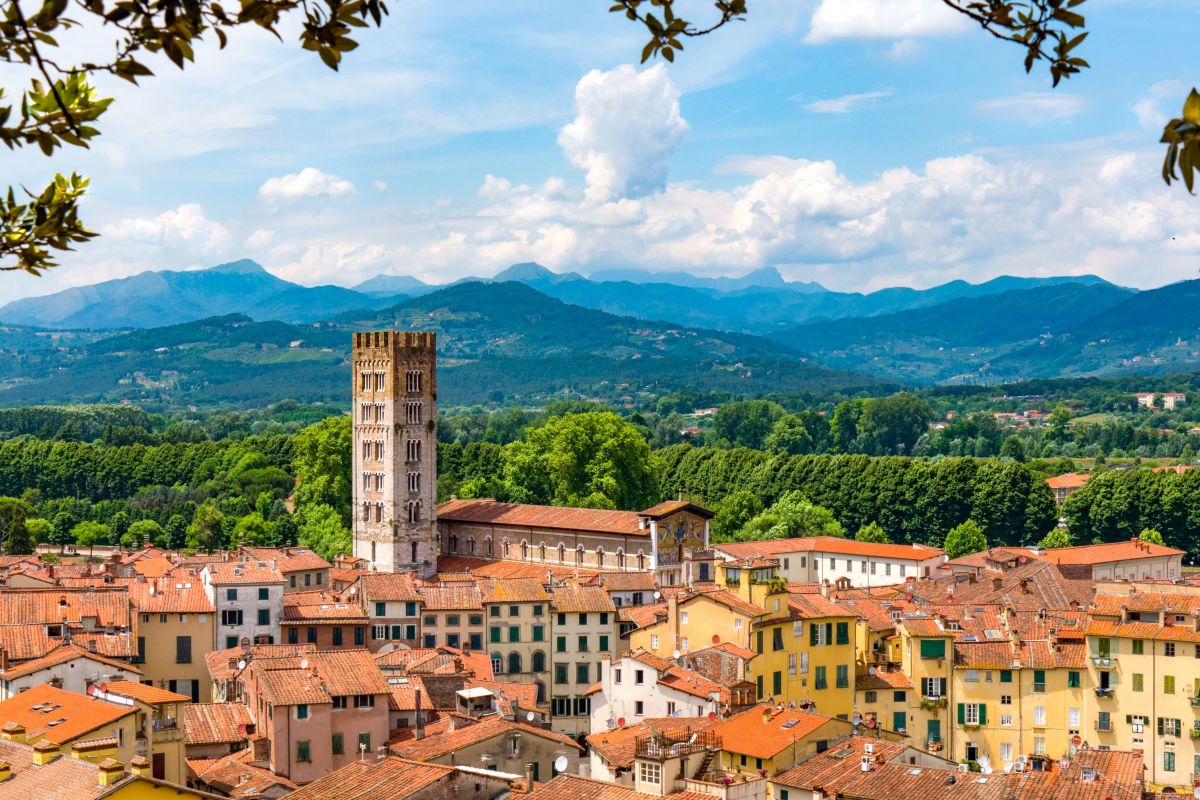 Florence
You can’t visit Tuscany without heading to one of its most well-known cities: Florence. Here, you’ll discover Renaissance treasures like Michelangelo’s David at the Accademia Gallery, Botticelli’s “Birth of Venus” at the Uffizi Galleries and Fra Angelico’s famous frescoes at the Museum of San Marco. After perusing Florence’s iconic works of arts, go for a stroll along the Ponte Vecchio, where merchants have sold their wares since the 1400s. You’ll also want to see Filippo Brunelleschi’s Duomo at the Cathedral of Santa Maria del Fiore. Consider paying 18 euros (about $20) to climb to the top, where you’ll find unparalleled city views. For luxe accommodations, stay at the Four Seasons Hotel Firenze. (Getty Images) 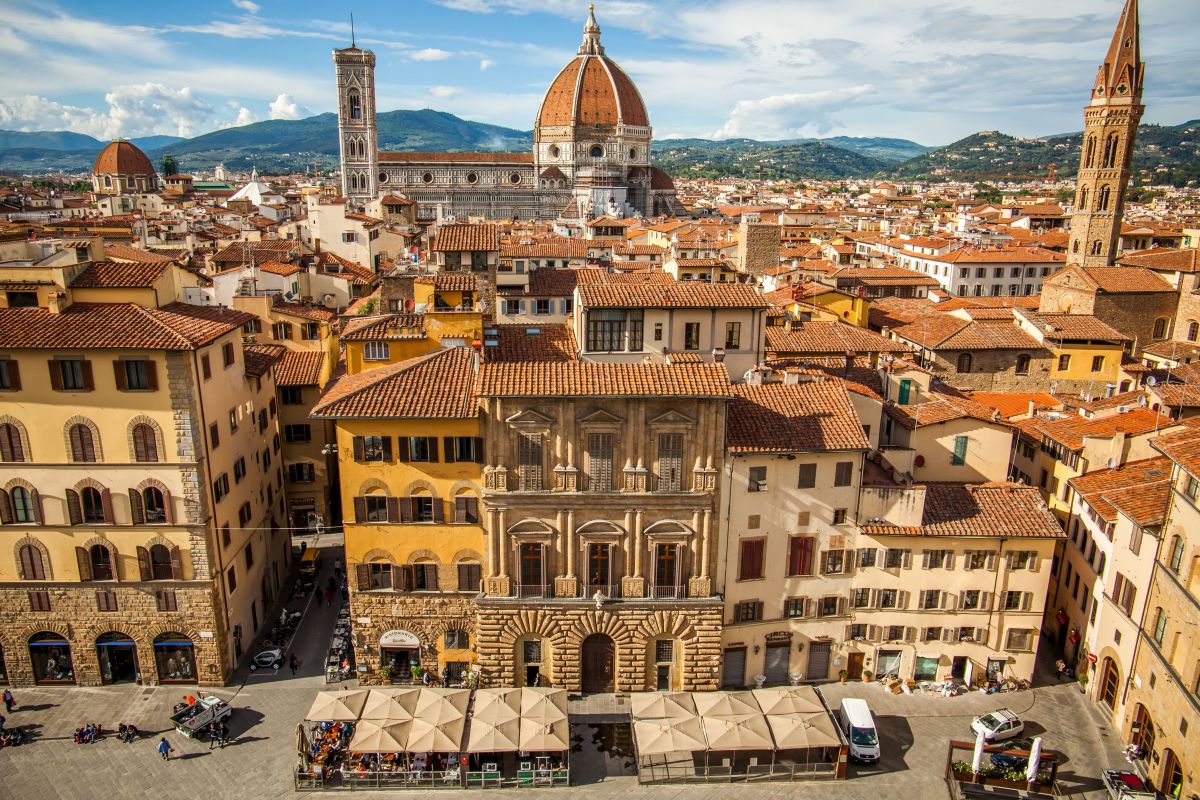 Pienza
Named after former resident Pope Pius II, Pienza (a UNESCO World Heritage Site) is a charming and romantic Tuscan village that’s filled with flower boxes and stunning countryside vistas. Spend time meandering down its many corridors and streets or sampling some of its world-famous pecorino cheese. Top Pienza attractions include the Cathedral of Santa Maria Assunta, the central Piazza Pio II and several Renaissance palaces. Pienza offers a handful of hotels and bed-and-breakfast accommodations, such as Hotel Corsignano. Or, you can choose to stay outside of town in a countryside villa. (Getty Images) 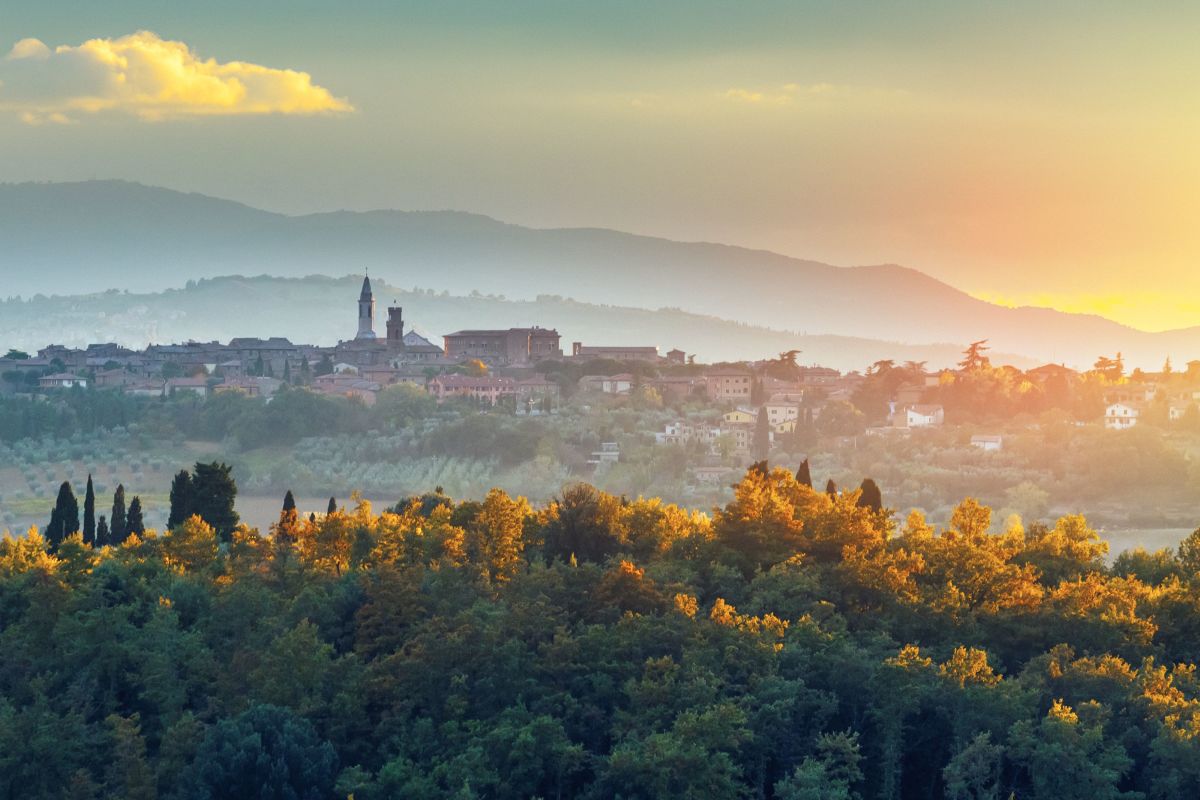 Barga
For quintessential Tuscan character, head to the region’s Apuan Alps to visit Barga. Located more than 1,300 miles above sea level, this town features the Romanesque Cathedral of San Cristoforo, which houses a wooden statue of St. Christopher (the village’s patron saint). What’s more, Barga boasts its own castle that once served as a private residence. Once you’ve gotten your fill of sightseeing, enjoy a picnic lunch on the Arringo, a large green space with sweeping views of the area’s rolling hills. Or, unwind at the 1,700-acre Renaissance Tuscany Il Ciocco Resort & Spa, a luxurious countryside property with two pools, a spa and several eateries. (Getty Images) 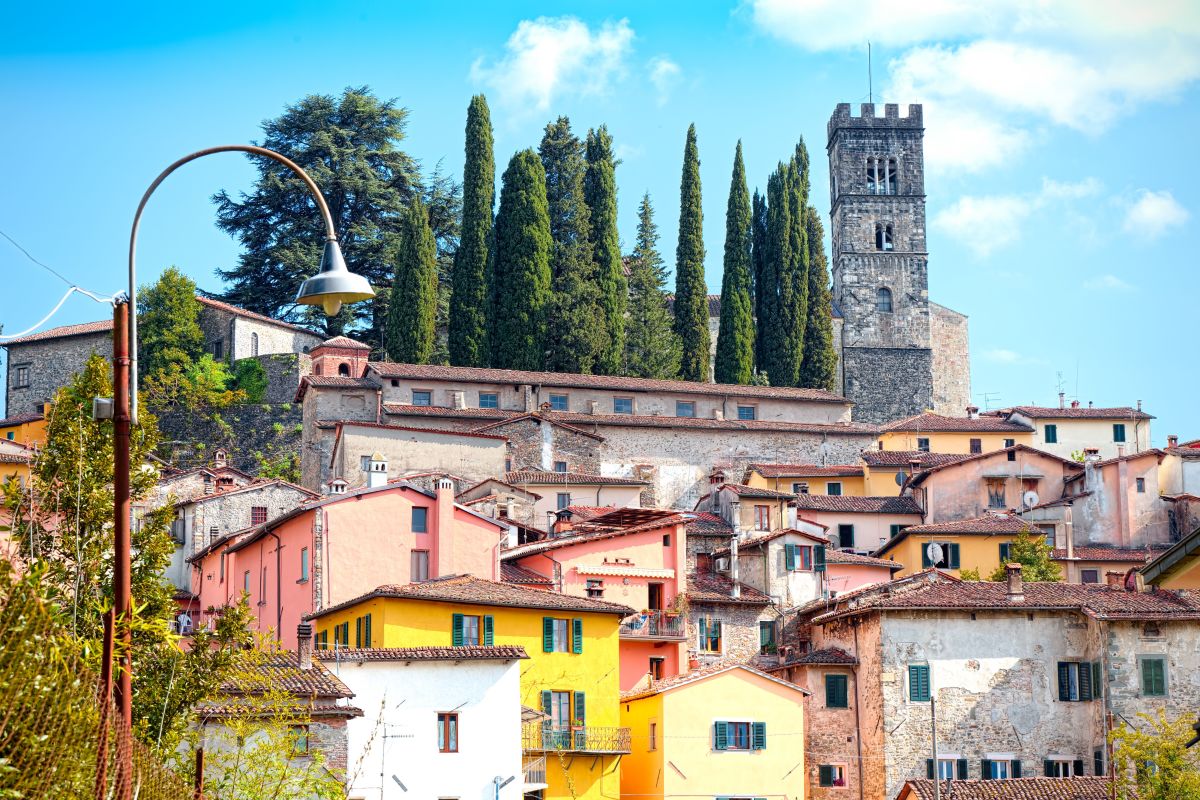 Montepulciano
Oenophiles who love red wine should not skip Montepulciano while vacationing in Tuscany. The clay hills that surround this town are prime spots for growing prugnolo gentile grapes, which are used to produce Montepulciano wine. In fact, wine is such an integral part of the town that its eight districts compete in an uphill barrel-rolling competition every August. When travelers are not sipping vinos, they can check out Montepulciano’s Piazza Grande, the highest point in town. Montepulciano even has its own thermal baths, as well as religious sites like a cathedral with an incomplete exterior and the Temple of San Biagio, a Renaissance church. (Getty Images) 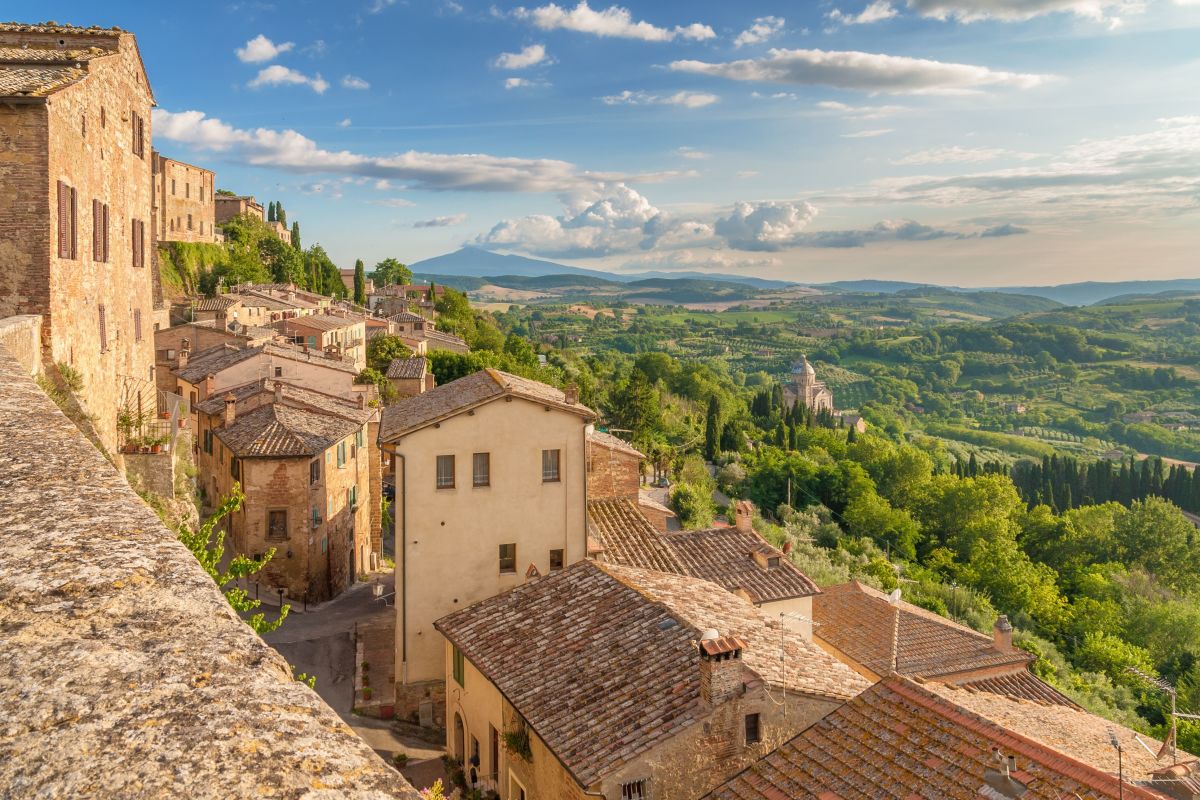 Cortona
If you’ve read “Under the Tuscan Sun” and have dreams of restoring a Tuscan villa, you’ll want to stop by Cortona, where author Frances Mayes made that dream come true. Once a major hub of Etruscan civilization, Cortona now features museums filled with Etruscan artifacts, including the Diocesan Museum’s Fra Angelico fresco. You can also visit Etruscan tombs and nearby roads that were paved during ancient Roman times. Additionally, Cortona is home to the 16th-century Girifalco Castle. Climb the castle’s tower for panoramic views of the surrounding landscape. (Getty Images) 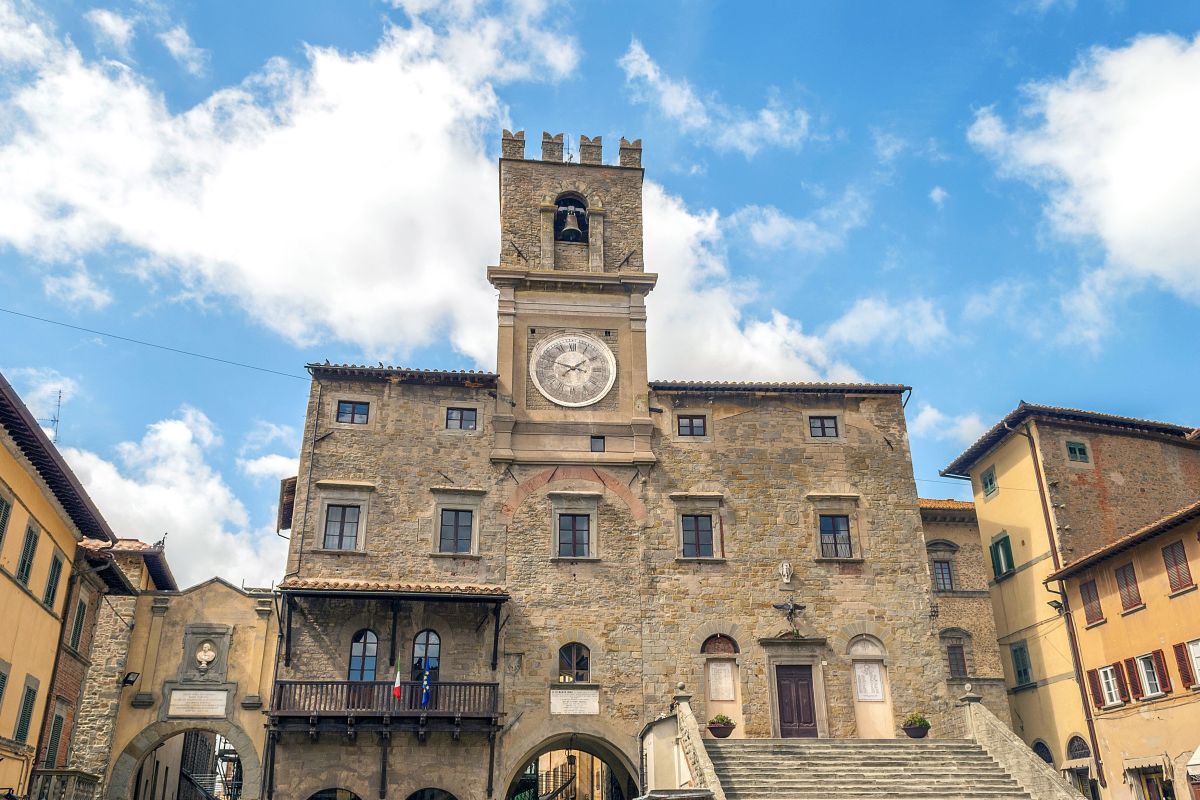 Montalcino
Another top stop for a wine vacation, Montalcino specializes in the Brunello variety of red wine. But this hilltop town in the medieval Val d’Orcia region offers more than just vino. Montalcino – which is surrounded by 13th-century walls – is home to the Civic and Diocesan Museum of Sacred Art (a former 15th-century convent that offers a collection of works from the Middle Ages to the 1900s), plus a fortress built in 1361. Like other Tuscan towns, Montalcino boasts a main square with quaint cafes and historic buildings, such as a town hall with a clock tower. (Getty Images) 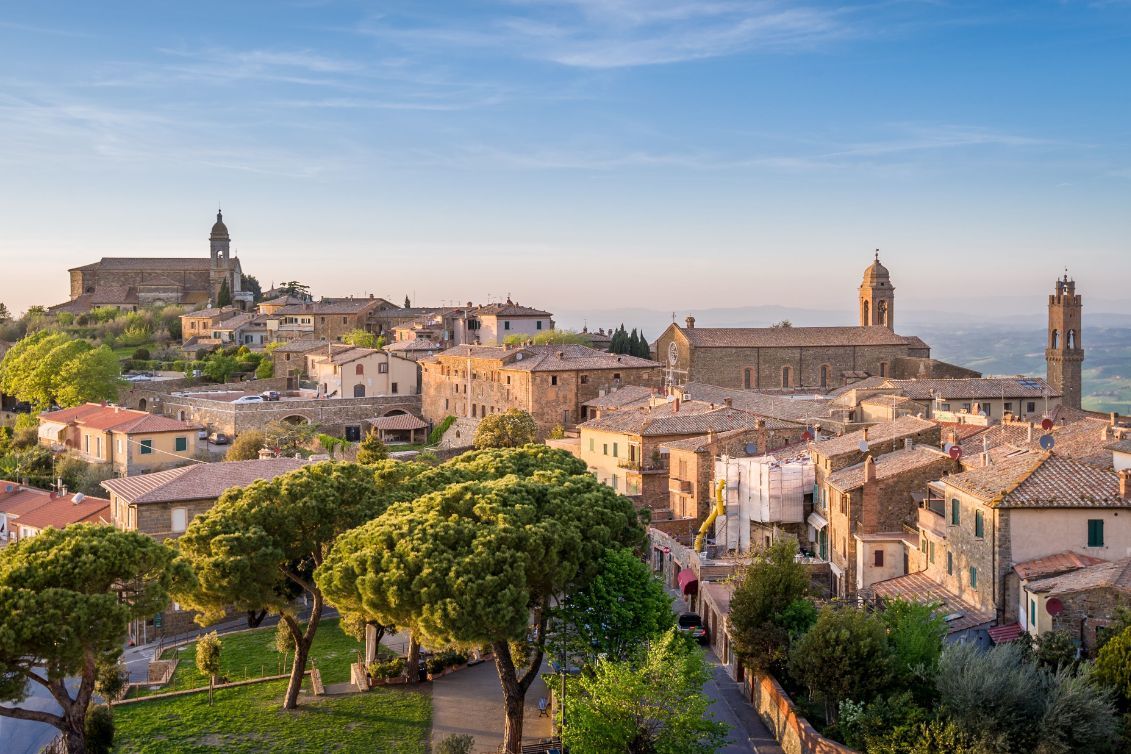 Pisa
A visit to Pisa to see the city’s famous Leaning Tower of Pisa – and, of course, pretend to hold it up while posing for a picture – is a must for many Tuscany tourists. You can even safely climb the tower’s 294 steps to take in jaw-dropping city panoramas. But there’s plenty more to see in this city than just its tower. Next door is the Romanesque Pisa Cathedral, the majority of which was built in the 12th century. The Pisa Baptistery, where Galileo was baptized in 1564, is another top attraction you should add to your Pisa itinerary. (Getty Images) 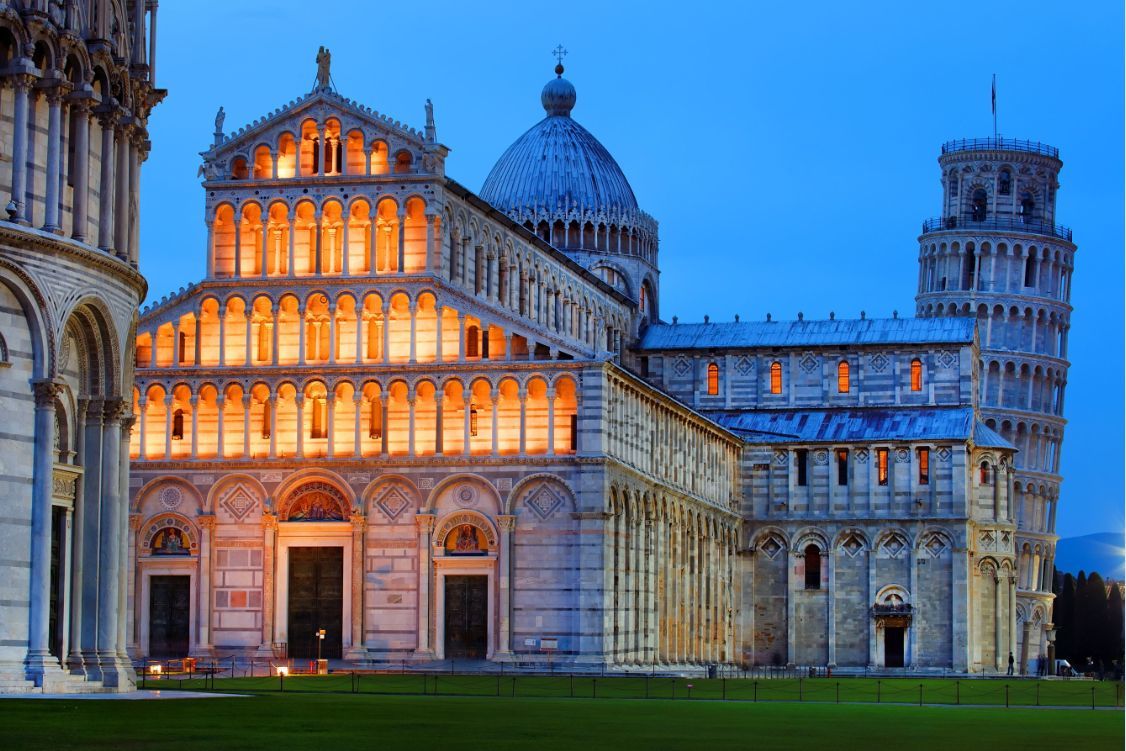 Chianti
The Chianti area – which includes towns like Radda and Castellina, plus picturesque countryside retreats, such as Cuvée’s Tuscan Farmhouse – covers a swath of Tuscany about 30 miles south of Florence. The region is known for its superb wines, including the highly regarded Chianti classico variety. Additionally, travelers will find an array of activities and attractions. In Pievasciata, installations from international artists are on display at the Chianti Sculpture Park. Greve boasts a Saturday market where everything from locally made goods to fresh produce is sold. Gaiole offers Meleto Castle, which was once a Benedictine monastery. Throughout the region, cyclists will discover rolling hills and winding roads that are ideal for scenic bike rides. (Getty Images) 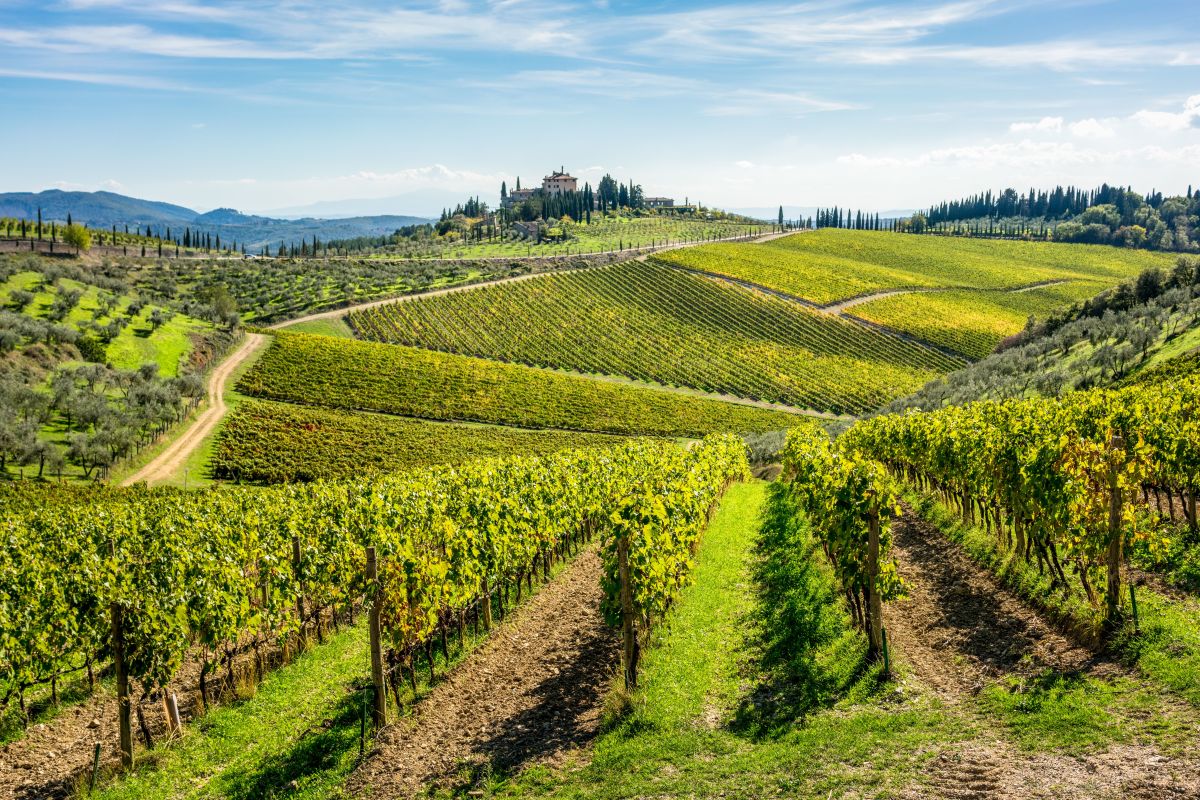 Montefollonico
A small hilltop village founded around A.D. 1000, Montefollonico features all kinds of old-world details, including its original defense walls, the Romanesque Church of San Leonardo and its ancient water cistern. Known for producing vin santo (a sweet wine designed to accompany desserts), the town is near to many other Tuscan destinations, making it a terrific home base. At La Chiusa, guests can bed down in digs within a former olive mill and participate in Tuscan cooking classes at the boutique hotel’s cooking school. The property even features hundreds of olive trees that are used to grow olives for olive oil made on-site. (Getty Images) 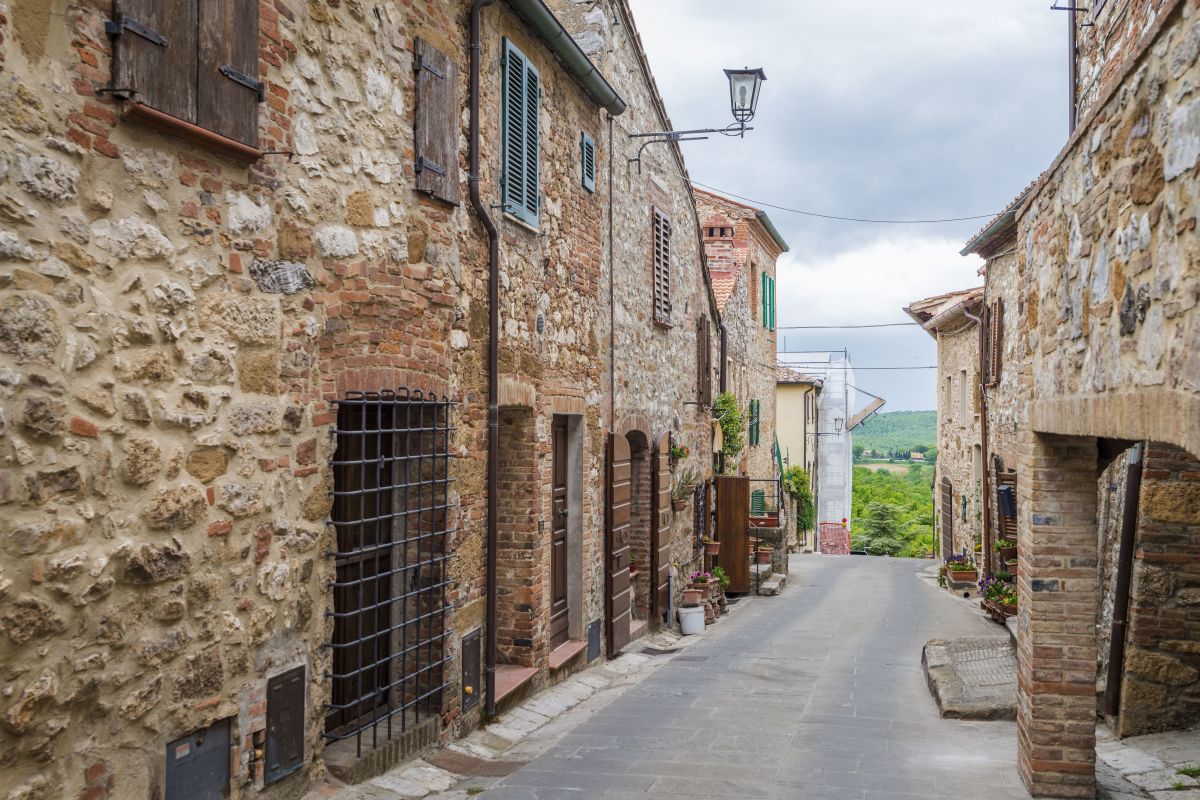