4 Things You Must Know About the Future of Space Travel

The good news is space tourism is no longer out of reach, but unfortunately the current price tag is for many aspiring travelers.

Think space travel is just for skilled astronauts and fictional characters from your favorite “Star Wars” films? Think again. You don’t have to be a professional scientist to fly into suborbital space, but you will have to pay a steep price.

With a variety of pioneering companies competing to launch humans into space, lunar exploration is taking off. Take SpaceX, the brainchild of Elon Musk, which plans to transport two passengers aboard its SpaceX Falcon Heavy rocket to cross over the moon and back in 2018. Or Jeff Bezos’ Blue Origin rocket company, which aspires to launch six lucky tourists into space via a capsule, and that’s testing its New Shepard rocket ahead of plans for commercial suborbital journeys in 2018. For those more inclined to board a spaceship, Richard Branson’s Virgin Galactic aims to send tourists – including world-renowned physicist Stephen Hawking – aboard the SpaceShipTwo (a six-passenger aircraft) into space this year.

If you’re not interested in gliding into deep or suborbital space – or you lack the funds to support a $250,000 journey aboard the Virgin Galactic – you can enjoy epic space events from Earth this year, including watching the total solar eclipse on Aug. 21, stargazing in prized national parks or even checking out the northern lights.

Thanks to groundbreaking technological advancements, space tourism is no longer a pipe dream. Here are leading astro-tourism trends to watch in 2017 and beyond.

The 21st-Century Space Race Is Heating Up

Virgin Galactic’s SpaceShipTwo and Blue Origin’s New Shepard are carving the path for space tourism by utilizing “reusable space vehicles,” explains Bill Gutman, vice president of aerospace operations at Spaceport America, a commercial space complex that aims to unlock the future of space exploration. While refurbishing rockets can be costly, reusing rockets, shuttle space engines and space vehicle parts can significantly reduce costs for space entrepreneurs and ultimately space tourists. “These vehicles have the potential to open the space experience to vastly more people than has been possible heretofore,” he says. Plus, reusable technology could trim the launch costs, advance technology breakthroughs for future exploration and enable a greater volume of launches, making space travel more accessible to tourists, he adds. “It is anticipated that Virgin Galactic will take more people to space in the first few years of operations than have experienced space from the beginning of the Space Age until present,” Gutman explains.

Orbital space travel will also be available to tourists in the near future, he adds. Gutman points to Bigelow Aerospace, which is working to build sophisticated space equipment like the Bigelow Expandable Activity Module for the International Space Station. “Bigelow Aerospace is well along with developing space habitat modules that will enable longer space tourism stays perhaps akin the ‘Orbital Hilton’ as seen in the movie ‘2001: A Space Odyssey,'” he says.

Boeing, in partnership with NASA, also has developed technology that will enable astronauts to experience low-orbit earth journeys aboard the Crew Space Transportation-100 Starliner. While other companies are offering suborbital journeys, the Starliner aims to carry up to seven people per trip to low-earth orbit. Though Starliner’s technology is specifically designed for astronauts to advance space exploration, a future commercial airline is already being tested at Kennedy Space Center and is slated to launch in 2018, explains Kelly Kaplan, communications lead at Boeing Space Exploration.

Private commercial space tour company Space Adventures has partnered with Boeing to market seats on the Starliner, but it had not yet released information on what the experience will entail. “Our clients have traveled over 36 million miles and have spent a total of approximately three months in space. We also have plans to fly two clients around the far side of the moon on a modified Russian Soyuz spacecraft,” says Tom Shelley, president of Space Adventures.

Commercial Space Stations May Become a Reality in the Near Future

Getting materials and supplies transported from Earth to commercial space stations or settlements will have a high initial cost, but in the future, “it is likely that technologies will be developed to recycle materials, to grow food in space and to utilize lunar materials to build and to provide oxygen and water,” Gutman says, enabling costs to go down. To accomplish this, commercial space lines will be vital, he adds. But first, operators must “demonstrate to the FAA that risk to the uninvolved public does not exceed a threshold level,” he explains. In the future, the FAA may license space adventures, he says, noting that the process “will be complex because international law and treaties must be considered.”

Boeing and NASA are also teaming up to help astronauts expand research with a deep space gateway and transport system that will create an environment, similar to the International Space Station, complete with a docking system and technology to shield astronauts from the harsh conditions, enabling an ideal jumping-off point for journeys from the moon to Mars, Kaplan adds.

In the Near-Term, Space Travel Will Cost You

Launching into suborbital space is possible, but it won’t be cheap. While you can purchase tickets to board the Virgin Galactic, prices and ticket reservations for Blue Origin’s New Shepard have not yet been revealed. “As with all new enterprises, we would certainly expect that as more providers enter the market, the price for a space tourism experience will trend lower. The ultimate price point will be determined by supply and demand and by the success of providers in bringing cost-lowering technologies to the market,” Gutman adds.

If you’re interested in visiting the International Space Station with an outfitter like Space Adventures, you can book tickets now. Pricing is contingent on the mission, timing and vehicle, Shelley explains. The cost for a flight to the ISS is roughly $50 million; flights orbiting the moon are priced at $150 million per person, he explains.

You Can Embrace Your Inner Astronaut on Earth

If you don’t have the funds to support a moon mission, you can still enjoy otherworldly experiences on terra firma. “Space Adventures is able to arrange on-the-ground space-related experiences, such as tours to watch rocket launches from Baikonur in Kazakhstan, or the ability for clients to experience elements of the same training required for our private astronaut clients in Star City, Russia,” Shelley explains. Space Adventures also offers zero-gravity flights for roughly $5,000, Shelley adds. 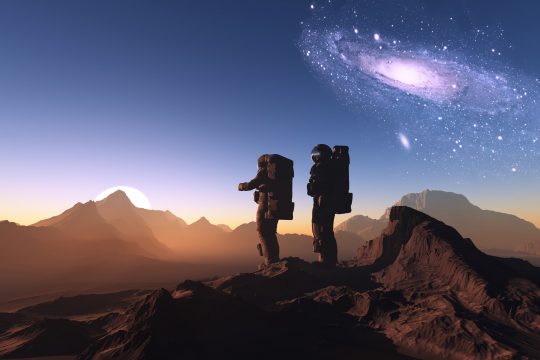