Discover the real Music City, and fall in love with this Southern charmer

Nashvillians have never been accused of being bashful. In Music City, Southern hospitality is served up more often than homemade macaroni and cheese at the local “meat and threes” (regional restaurants that serve meat and three sides). Folks here are proud to show off their legendary hometown every chance they get.

According to Andrew Atkins III, a longtime resident and lead navigator/concierge at Renaissance Nashville Hotel, “If you ask us for directions in Nashville, we’re likely to offer you a ride and drive you there ourselves.”

In addition to suggestions from locals, you should also check out some of Nashville’s unique guided tours to get a feel for the city. Here are just a few of the city’s best tours that Nashville insiders say you can’t miss.

Have you ever wondered how Music City earned its nickname? Well, that’s exactly what you’ll discover during the Walkin’ Nashville Music City Legends Tour, a two-hour jaunt through downtown Nashville that focuses on the golden age of country music. You’ll explore iconic music venues like the Ryman Auditorium, where the likes of Johnny Cash and Patsy Cline once took the stage. Other stops include Printers Alley, an entertainment district popular during Prohibition, and Hatch Show Print, a historic letterpress that has been in operation since 1879.

Laura Cunningham, head concierge at the Hutton Hotel, says she highly recommends the Walkin’ Nashville tour, which is led by music journalist Bill DeMain. “The tour takes you through downtown and it covers the city’s history and our music history, too,” she says.

“There is one tour that I would hate for anyone to miss when they are in town,” says Dawn Kote, concierge at Hilton Nashville Downtown. “And, it’s the Historic RCA Studio B tour. If you come to Nashville, that’s a do-not-miss. It will make the hair stand up on the back of your neck. You actually get to sit at the piano where Elvis recorded. And, it’s still a working studio. I mean Bono recorded there when he came in town.”

Tours of Historic RCA Studio B depart every hour from 10:30 a.m. to 2:30 p.m. each day. You can purchase a guided tour of the studio as part of a package that also includes admission to the Country Music Hall of Fame and Museum. The package costs $39.95 for adults.

Do you have what it takes to become Nashville’s next big hit-maker? With The Sound Nashville Music Tour, you can test your songwriting chops. You’ll hop on a bus to join other music enthusiasts while your tour guide shares stories of Nashville music lore. At the end of the trip, you’ll hit center stage to perform an original tune.

“The Sound Nashville Music Tour is based on what Music City is all about,” says Shannon Gray, lead concierge at Loews Vanderbilt Hotel. “They have a tour guide and a songwriter and the guests actually write a song while they are on the tour. And, you get to perform your song at the end of the tour!”

Tours are available Tuesday through Saturday at 11 a.m. and 1 p.m. The tour costs $35 per person and lasts 90 minutes.

Nelson’s Green Brier Distillery was established in 1867 and by the late 19th century, its production of Tennessee whiskey eventually surpassed a (then) lesser-known local rival, Jack Daniel’s.

At the height of its popularity in 1909, the distillery shut down production following a statewide prohibition law. But, nearly 100 years later, the brand was revived by two of the great-great-great-grandsons of founder Charles Nelson. Today, they craft whiskey based on the original century-old recipe.

“I really am in love with Nelson’s Green Brier,” Kote says. “They are the maker of Belle Meade Bourbon. It is family-owned, it’s family-run. And, the story behind it is charming. It’s perfect for guests visiting Nashville. And, I like their bourbon, and I mean, you’ve got to have bourbon if you come to Nashville.”

Tours of the facility and tastings take place seven days a week and cost $10 per person. Visitors can also stop by the gift shop.

It’s an unwritten rule that everyone needs to visit the Ryman at least once. This nearly 2,400-seat venue was originally constructed as the Union Gospel Tabernacle and later became the home of the Grand Ole Opry from 1943 to 1974. Today, the “Mother Church of Country Music” consistently features sold-out shows featuring headliners including Emmylou Harris & The Nash Ramblers, the Pixies and Little Big Town.

“When an artist plays there, it seems like they up their game,” says Butch Spyridon, president and CEO of Nashville Convention and Visitors Corp. “They always bring their best, because of the reverence to the building. So, you appreciate the respect of the music industry for the building.” 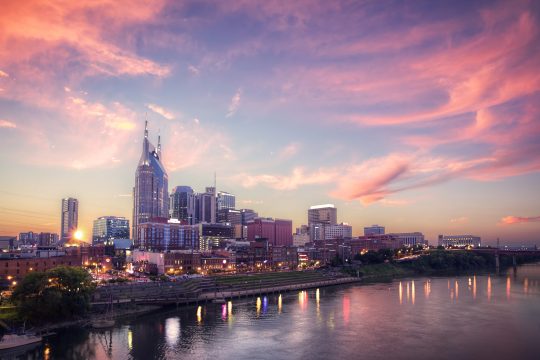