When I am asked what might be the most intriguing destination I have ever had the good fortune to cruise to in my career, I always say that the voyage along the Amazon River in Brazil has to be right up there near the top.

I was in command of Cunard Line’s Queen Victoria in 2017 when we became the largest ever vessel to sail the near 1000 miles up the Amazon from the sea to the port of Manaus. 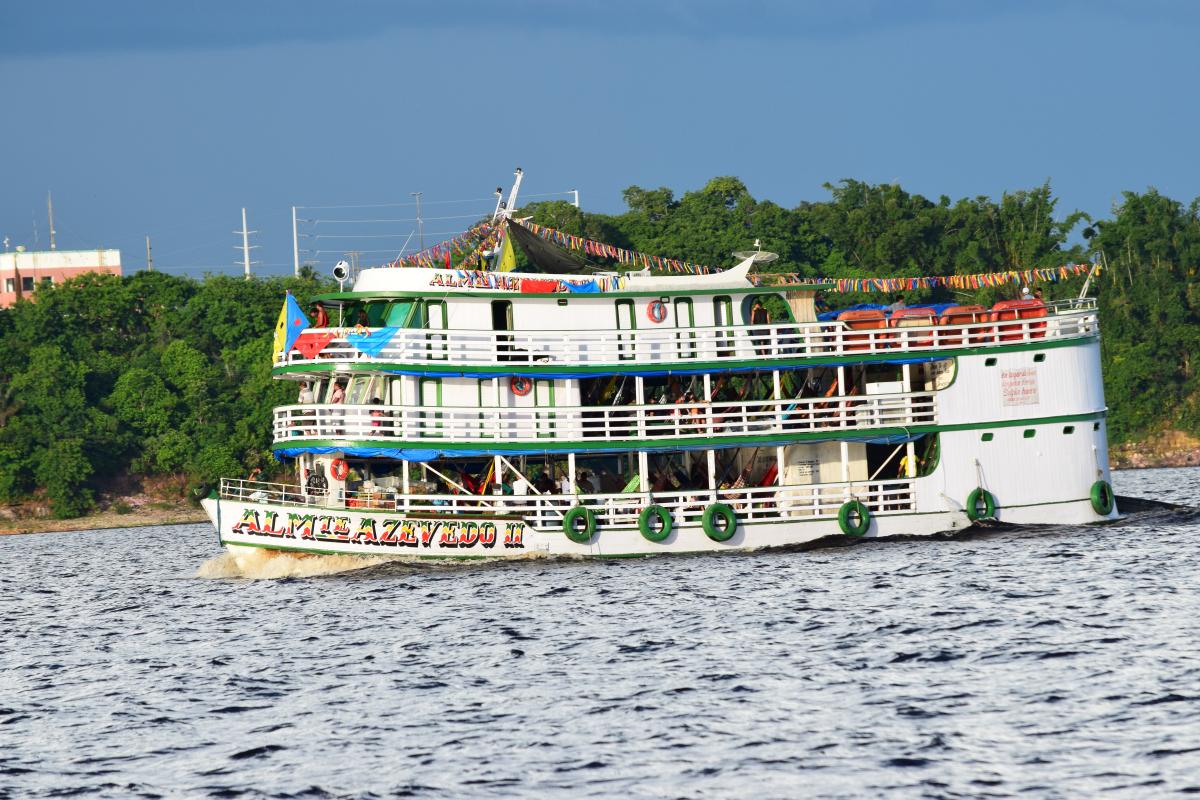 It illustrates the immense size of the Amazon when you realise that a 290 metre (951 foot) long passenger vessel can safely navigate almost its entire length into the very centre of the South American continent. To say that the Amazon is a huge river is an understatement – it’s statistics eclipse those of any other river in the world.

Of course, the research and planning into that 2017 maiden voyage was extensive and indeed it formed part of that year’s World Voyage in late January and so coincided with the wet season in the Amazon region, when the waters of the river are at their highest and the depths increase by many feet, making it very safe for a ship of that size and with an 8.0 metre (26 feet) draft below the waterline.

From my side, one of the most “interesting” (and for that, read mind-focussing!) parts was the entrance to the river across the “bar” which is the shallowest part of the outer estuary where all the silt and mud carried by the river water piles up on the sea bed. There is only a narrow deep water channel maintained by dredging which the ship could follow to actually get into the river and I was slightly amused that the specialist Amazon River Pilots only joined us around 100 miles into the river and well after we had crossed the “bar”…!!

However, once on board they were very professional and assisted us greatly in our passage, first to the port of Santarem and then on to the port of Manaus, a city of almost two million people in the heart of the Amazon rainforest. 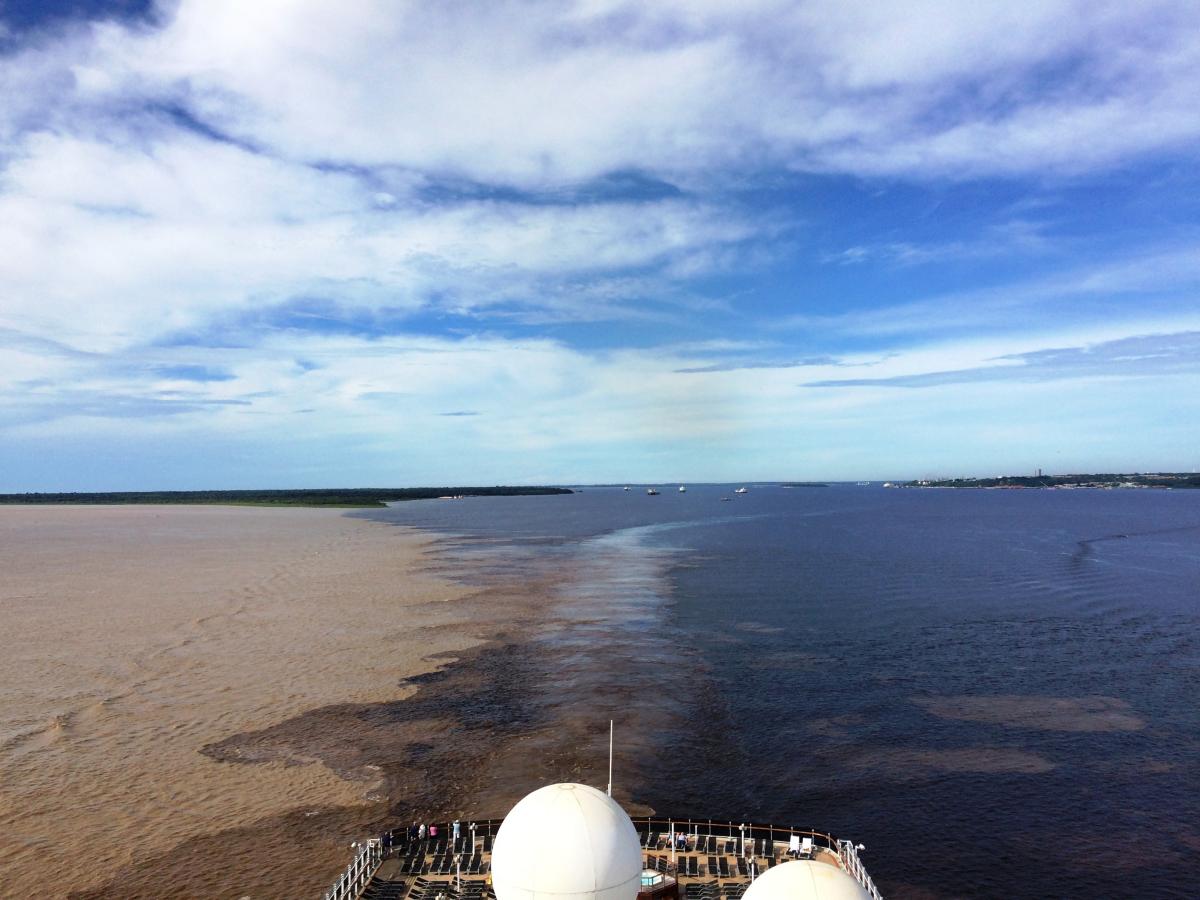 Manaus was a rubber industry boomtown and was founded in 1669. It became the richest city in South America by the late 1880s and many wealthy European families settled there, bringing their love for sophisticated European art and culture with them. There is to this day a unique 700 seat Opera House built right there in the middle of the Amazonian rainforest and opened in 1896, with bricks brought in from Europe, French glass and Italian marble! I was lucky enough to attend a performance in the Amazonas Opera House myself and it was quite an experience considering the remote and inaccessible part of the world you are in!

Unsurprisingly we caused quite a stir as we carefully sailed Queen Victoria through the upper reaches of the river and into Manaus port itself. Never had such a huge ship ever entered the port and a helicopter complete with camera crew and photographers buzzed overhead as the harbour tugboats came out to greet us!

Manaus is the point where the Rio Negro and the Rio Solimoes join to form the Amazon. It is an incredible sight to behold, as the dark waters of the Negro meet the lighter brown waters of the Solimoes and flow for several miles downstream without mixing. Hence one side of the river is blackish and the other very much more a brown colour and this is the area known as the “meeting of the waters”. 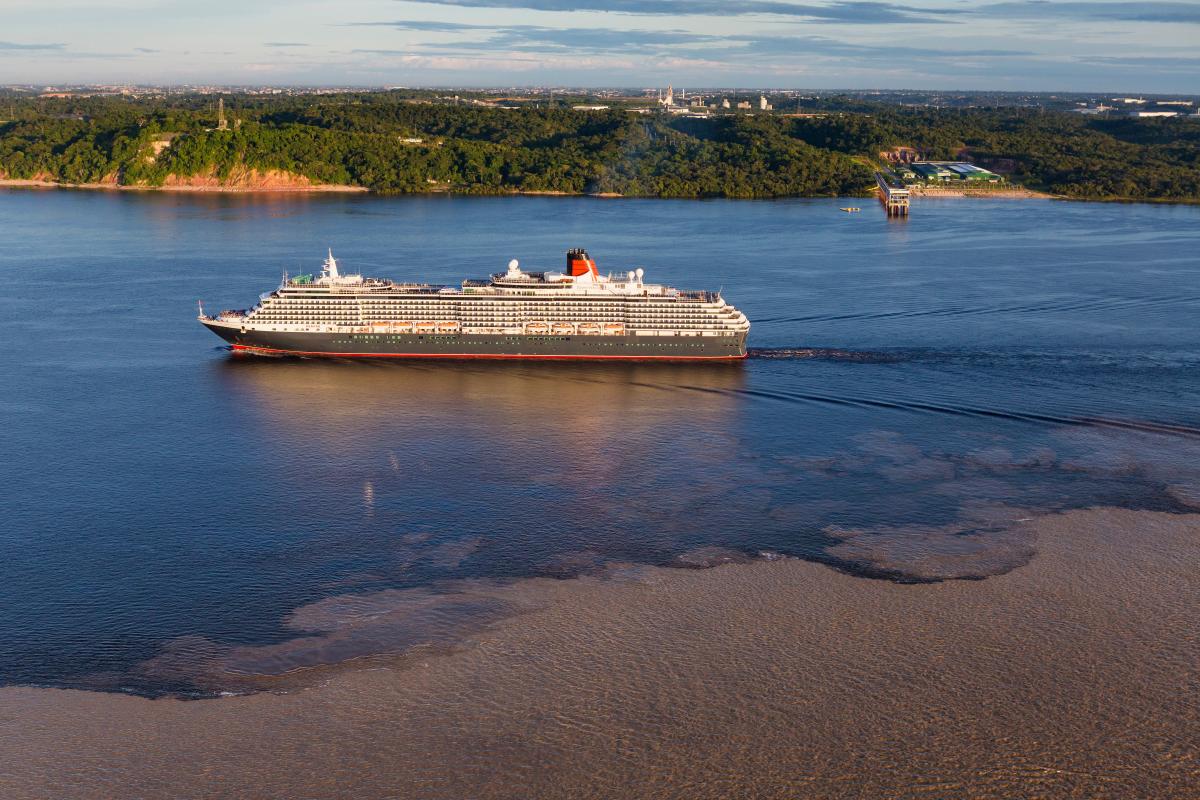 The ideal spot for the best photo of Queen Victoria’s arrival was of course near the meeting of the waters and I’m glad to say they came out very well.

I’m delighted to say that Cunard will once again be sending Queen Victoria to the Amazon in January 2020 and I fully recommend that voyage if you love cruising and are looking for something out of the ordinary – something where you could really say that you have explored new ground and been to a spectacular part of the world where not so many folks could say they have ever been to!

Look for the Cunard Amazon voyages through the pages of The World’s Greatest Vacations website and be prepared to be amazed…!!!