For anyone keeping score, Florida and its governor, Ron DeSantis, won its battle against the CDC to overturn the Conditional Sailing Order (CSO).

But at least for the moment, it won’t change much from a practical perspective.

Shortly after a judge affirmed Florida’s win, making the CSO and its accompanying measures, such as technical instructions and test cruise mandates, nonbinding in the Sunshine State, all the major cruise lines that operate from Florida said they would continue to comply with the CDC’s recommendations contained in the order.

“All Florida-porting ships have chosen to voluntarily follow” the CSO, the CDC said in a statement. CLIA echoed the statement.

“CLIA oceangoing cruise line members resuming initial operations from Florida and all other U.S. ports will continue to operate in accordance with public health protocols that prioritize the health and safety of passengers, crew and the communities we visit,” the group said. “This aligns with the cruise industry’s decadeslong commitment to following the advice and guidance of scientists and public health experts.”

There are various reasons the industry is choosing to adhere to the CSO in Florida.

What it may ultimately come down to is that the cruise industry wants to operate in a way that its deems the least likely to result in any Covid-19 outbreaks.

When asked why Royal Caribbean Group brands would follow the CSO in Florida, CEO Richard Fain said that it was “very important that we have a credible and effective set of protocols.”

“We are now having a constructive dialogue with the CDC,” he continued. “We want to honor this process and the confidence it gives us and the traveling public in the safety of cruise travel. The result today is that cruising can be safer than a day on Main Street, USA. The process that has achieved that is one that we’re very proud of and that we want to build on, not undermine.”

There is another street that the cruise lines know look favorably upon their cautious re-entry: Wall Street.

“We applaud, as do the travel executives, the industry for being cautious so far around Covid safety protocols,” said Patrick Scholes, cruise industry analyst with Truist Securities. “Cruise lines are possibly one sizable outbreak or conceivably a Covid-related death away from potentially being back where they were a year ago. It’s not the CDC that could put them out of business; rather, it will be customers who will become skittish.”

Robin Farley, an analyst with UBS, also noted that cruise lines are locked into test sailings and restart schedules for the next month and that changing course now won’t necessarily result in a faster restart, given how long it takes to get ships ready for service.

Also, given how many times the ruling on the case has changed — three times since June — it’s very possible the case is not closed, she said.

“The cruise lines may not want to venture too far from CDC suggestions, since they could end up under CDC direction again,” Farley wrote.

She also said that the court’s ruling lessens the likelihood that the CDC would shut down cruise operations again.

“They don’t have the authority to do that in the near term, and perhaps the ongoing legal issue will make the process more collaborative,” she said. “It certainly seems to lessen the capital risk of a future potential shutdown.”

While DeSantis has positioned himself as a champion of the industry — and it has been argued that his lawsuits have pushed the CDC to engage with the industry and speed up its restart — his refusal to budge on the Florida law that prohibits businesses from asking for proof of vaccination actually hurts rather than helps an industry that needs to restart as safely as possible. It led to the lawsuit by Norwegian Cruise Line Holdings against the state to overturn the law, which Scholes also applauded.

“[We] sympathize with NCLH for the ‘impossible dilemma’ they are in, trying to comply with state laws and CDC recommendations,” Scholes said. “We believe the cruise lines really do not want unvaccinated passengers at the moment, but Florida is not giving the cruise lines any choice in the matter.”

And as Farley put it, being able to require passengers to be vaccinated gives cruise lines the huge advantage that Fain described.

“While they aren’t required to do that, the cruise lines are now one of the few places in the world where one can go, let alone vacation, knowing that all surrounding [passengers] are at vaccination levels above 90%,” Farley wrote.

That seems especially important as Covid cases rise and the delta variant threatens the world’s road to reopening.

“It’s reassuring that the vaccines seem to be so effective against it,” Fain said of the delta variant. “It reinforces the importance of people getting vaccinated, not only for their own sake but for the sake of society. 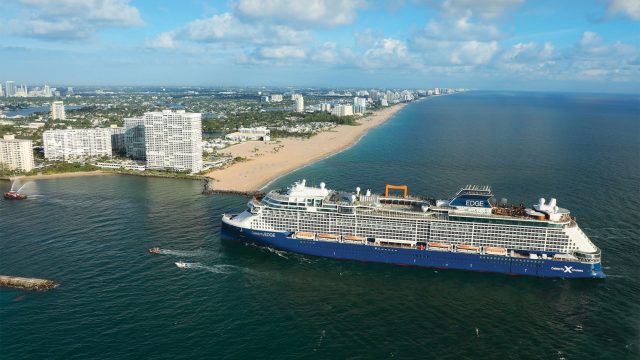