Hello again and as you may have read, I just finished my career at sea on “big ships” as Captain of Queen Mary 2 in September 2018 and it really was an amazing way to complete a career.

But we all start somewhere and I still vividly recall my early days as a young 16 year old Navigating Cadet joining my first cargo ship a long way from home and brand new to sea.

One of the time honoured traditions at sea is that first-trippers as we were called, being on our very first contract, were fair game to have all the old tricks in the book played upon them!

I’m delighted to say that I was not left out in this respect and after my first month on board the London Baron, as my first cargo ship was named, an electricity bill was waiting for me in my cabin at the end of the day’s work!

Of course there is no such thing as an electricity bill for crew working on cargo ships, but I did not know that and putting aside my indignation I duly wrote out a cheque to the Company for the amount shown. Imagine how I felt when I realised I had been tricked, as I later strolled into the Officers’ Bar, there was my cheque nicely framed and displayed on the wall behind the Bar for all to see….!!! The old-timers all thought this was highly amusing!

I also recall being asked to help sew nosebags for the Panama Canal mules, as my ship approached for my very first time of passing through that famous route! In case you are not aware, the “mules” at the Panama Canal are in fact the heavy electric locomotives which control the ships in the locks with their massively strong steel wires – but I didn’t know that either!!

You live and learn as they say and in my time I was also sent for some green oil for the starboard side light (no such thing as green oil!) and also to ask the Chief Engineer for an important tool which the Chief Officer needed for the particular job he had to do that day. He told me this tool was named a “long stand” and you can just imagine how long I stood outside the tool store having asked for one of those….!!!!

Good times and, as they say “character building” !

As Captain with Cunard I was regularly asked which was my favorite voyage or favorite cruising area? That is always such a difficult one to answer because how do you compare, say a Caribbean island with cities of culture such as Rome and Venice in Italy or St Petersburg in Russia?

As a “Brit” I always say that I like to travel to wherever it’s warm and sunny, as that type of weather is certainly never guaranteed back in the UK! However, I have to say that I do believe my favorite of all areas to cruise to is the Baltic Sea and it’s surrounding areas, with iconic ports of call such as Oslo, Stockholm, Copenhagen, Tallinn, Helsinki and of course the aforementioned St Petersburg. There’s such rich history, culture and architecture to experience in that part of the world – almost too much!

But one of the most amazing sights I ever saw whilst in the Baltic Sea one September some years ago occurred as I sailed Cunard’s Queen Victoria out of Helsinki in the late afternoon. I and the entire Bridge Team saw before us the incredible sight of the entire city skyline of Tallinn in Estonia on the far side of that part of the Baltic – upside down..!!! Every building and skyscraper in the now-modern city was upside down with their top pointing down towards the sea!

How could this be possible? Well, it is caused by a phenomenon called “refraction” in which the rays of light are refracted by unusual layers of air of differing temperatures in the atmosphere through which they are travelling. It causes objects to be apparently distorted, twisted or even turned upside down as in this particular case! It came as no surprise that we also saw ships in the far distance upside down or simply just seemingly floating about 100 feet above the horizon and not on the sea at all..!!

Just when you think you may have seen everything, the wonders of the natural world surprise you once again and cruising the world for a living really brings that home to you. 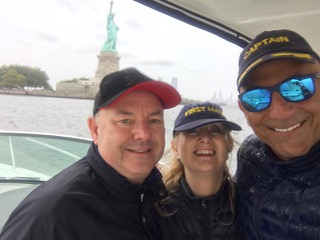 As I write, I see that Cunard is again cruising to Canada and New England out of New York in 2019 and that particular voyage is another of my all time favorites with breathtaking scenery, especially once in the mighty St Lawrence River, where the red and orange colors of the Fall foliage is at its best in the Quebec City area. My old ship Queen Mary 2 will take you there in style, so why not try it via The World’s Greatest Vacations?

Pictured is myself, Richard Shane of The World’s Greatest Vacations and my lovely wife Dawn-Marie on Richie’s boat in front of Queen Mary 2 in a rather wet New York, not long before she set sail for her 2018 trip to Canada and New England.

I wish you fair winds and following seas until my next column. 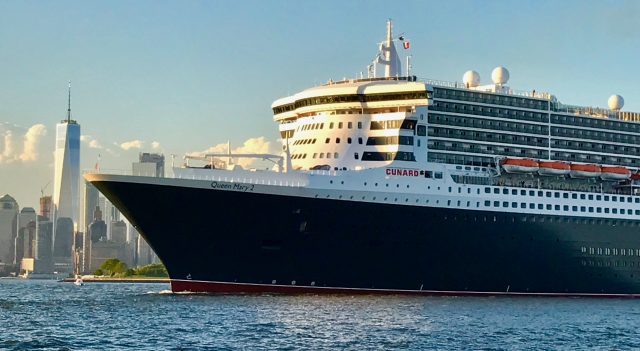