Over the course of four days this month, the four largest cruise lines laid out plans for the summer in which they demonstrated that, after a year of walking in lockstep as an industry, they are taking very different paths toward a restart.

Much can be inferred about why each of the brands — Royal Caribbean International, Carnival Cruise Line, Norwegian Cruise Line and MSC Cruises — chose different paths, but industry analyst Patrick Scholes of Truist Securities broke it down in simple terms: “Each cruise line is doing what they think allows for the greatest likelihood of getting their ships to sail.”

Each restart is in line with one of the two options that the CDC has detailed for cruise resumption. One path allows ships that attest to having 95% of crew and passengers vaccinated to skip test sailings and free guests and crew from wearing masks and social distancing in most situations.

The other requires ships not reaching the 95% threshold to conduct trial cruises and make all passengers, vaccinated or not, wear masks indoors and practice social distancing in public venues, among other restrictions.

Looming over all decisions is Florida’s ban on businesses requiring proof of vaccination. Florida is home to the three largest cruise ports in the country.

Related: Confused on cruise? Vax rules change up as restart nears
Norwegian Cruise Line has not wavered from its policy of requiring all passengers on every ship resuming service through October to be vaccinated. MSC Cruises went the other way, with no vaccine mandate at all.

The surprises were Royal Caribbean International dropping what had been a vaccine mandate for anyone age 12 and older on its cruises this summer out of Florida and Texas and Carnival Cruise Line saying that 95% of passengers must have the shots, eliminating almost all children under 12 from sailing.

Royal’s position was a reversal: The line had recently said it would not reach the 95% threshold but that anyone eligible for the vaccine would have to get it.

Carnival’s move was unexpected because president Christine Duffy had talked on several occasions about the difficulty of vaccine mandates, given that Carnival carries more families and children than any other line.

Richard Fain, CEO of Royal parent company Royal Caribbean Group, said that while the line has to follow the “law of the land” in Florida, he also made clear that unvaccinated travelers would face hassles compared with their vaccinated counterparts.

Unvaccinated passengers “will need to undergo additional testing and other restrictions,” he said in a video message to travel advisors. “That necessarily adds to their cost and adds limitations on the cruise for those people who choose to be unvaccinated.”

Duffy, meanwhile, said in an interview that the CDC requirements for ships with an unvaccinated passenger base, such as mandating vaccinated people to wear masks indoors, would not enable the line to deliver the Carnival experience.

“I think that creates a pretty big disincentive for people who are vaccinated to have to spend their cruise [wearing a mask] when they’re indoors,” Duffy said.

Also difficult would be the physical distancing requirements.

“Do you have to separate sections of a casino, which is tight quarters, or dining rooms or in the theater or in the comedy club? I just think it really puts a lot of burden on our team to be able to deliver the experience for everyone in a way that everyone can fully feel the experience,” she said.

Another concern for Duffy is the different requirements that destinations may have and whether some passengers would be unable to disembark, or if even vaccinated people would have to get tested to get off at a port of call.

“Our guests need certainty,” she said. “We’re sailing in July.”

Return to cruising a fluid situation

“We continue to work with the CDC and state and local health authorities on our final return to service plan in Florida,” Celebrity said when asked about the discrepancy.

The line perhaps hopes that the many legal experts who have been saying that federal law trumps state law in this case, and will exempt the cruise lines from the Florida law, are right.

“As per the supremacy clause in the Constitution, federal law takes precedence over state law in general,” said maritime law attorney John Hickey. “The CDC, which is a branch of the U.S. government, does have authority over certain aspects of the cruise industry. That should take precedence, certainly, over state law.”

Such was Carnival’s response when the Texas governor signed legislation similar to Florida’s. The line said it believed “the law provides exceptions” for businesses acting in accordance with federal law.

Related: When can Americans cruise? These ships will start outside the U.S.
As to why Royal would capitulate rather than claim federal precedence, Hickey said some Florida businesses may not want to engage in a showdown with Gov. Ron DeSantis.

“I get it,” he said. “Why go picking fights when you don’t need to? But the problem for the cruise lines is that if they sail without requiring vaccinations, they run the risk of a lot of infections.”

Given how quickly positions and policies have changed recently, there’s no telling which will last, which is why “nothing surprises” Scholes, the industry analyst.

“Given how things are moving very quickly, in another day or two I wouldn’t be surprised if any of these companies reversed their positions,” he said.

The fluidity does create some uncertainty for would-be cruisers, however.

“Though demand and pricing are strong, it has created some hesitation amongst travelers,” Scholes said, adding that given the limited number of sailings and limited occupancy, “demand still outweighs supply.” 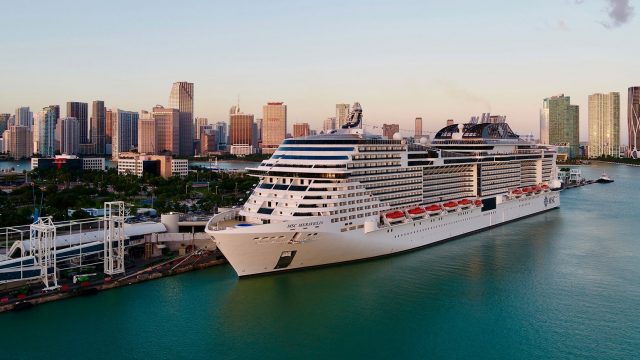