Get a Jump on Holiday Travel Planning: 9 Booking Tips and Tricks

Master the art of scoring a deal during the seasonal rush with these pro pointers.

Landing reasonably priced tickets and flying comfortably during the holidays can seem like an elusive task. At first, there’s the rush of excitement of getting out of town, feasting on pumpkin pie and watching winter classics like “Home Alone.” But then the reality of peak-season travel creeps in. Stagnant security lines. Chaotic airport terminals. Weather-related flight delays. And there’s the eye-popping price tags that often come with flying during the holiday frenzy. While spiking crowds – and sanity-testing situations – are to be expected, here’s the good news: If you get a head start, you can maximize savings. Use these expert-backed tips to save on holiday travel.

If you want to avoid price spikes, now is the time to start your search. The sweet spot for booking Thanksgiving travel is 61 to 90 days out, says Christie Hudson, U.S. communications manager for Expedia. Based on an analysis of flight data from 2016, Expedia found travelers who booked within that window saved up to 10 percent, she says. Meanwhile, those who waited to book under six days out “paid more than 20 percent above the average ticket price.” For the greatest savings opportunity, book your Thanksgiving trip by Sept. 23, Hudson says.

Plot when you book strategically.

The key to landing a bargain during the holiday travel season is knowing when to book your tickets, Hudson says. If you’re traveling around Christmas, “the cheapest time to book is 14 to 20 days out.” In 2016, those who booked within this period secured a 5 percent savings. And “like Thanksgiving, last-minute bookers are in danger of paying a premium, more than 15 percent above average ticket prices,” she adds. Also remember to time which day you book your holiday flights. “Book on a Sunday to save about 11 percent on domestic flights and 16 percent on flights to Europe,” she explains. For New Year’s Eve flights, Jeff Klee, CEO of CheapAir.com, recommends booking by October. In November, “you’ll see fares jump an average of $56. Waiting until December will cost you almost $150 more than if you’d bought back in September,” he says.

Instead of flying when everyone else is (hint: the Wednesday before Thanksgiving), stay flexible and consider alternative departure dates, says Tom Spagnola, senior vice president, supplier relations at CheapOair. “Typically, flying out the Wednesday before Thanksgiving and returning the Sunday after Thanksgiving are the most expensive dates to travel on. Try traveling on Tuesday, Thursday morning, and return on a Saturday or Monday,” he advises. The same strategy applies to Christmas and New Year’s airfares. He suggests researching flights that depart midweek, from Monday to Thursday, along with red-eye flights, which are in less demand and often yield the highest values.

For the best bang for your buck, travel on Thanksgiving and Christmas Day, Hudson says. “Flights on Christmas Day, for example, can be much cheaper than Christmas Eve, and airports and roads tend to be a little less busy,” she says. Another option for landing attractive rates: Taking a red-eye on Christmas Eve, Christmas Day or New Year’s Eve, Spagnola says, when there is “less of a demand, so there are some opportunities to save a lot of money.” Also keep in mind when you’re flying on turkey day, “If your flight is within 250 miles of where you are traveling, that flight usually takes an hour,” so you can easily make it in time for Thanksgiving dinner, he says.

The total cost of your trip hinges on where you want to travel. Thankfully, a variety of fare-tracking apps and tools conduct the legwork for you and “are based on an immense amount of data that helps them look at trends and airline activity on pricing instability in large-volume markets,” Spagnola says. Hopper, Airfarewatchdog and Skyscanner, among other tools, offer airfare price alert platforms that send you a mobile or email notification when a fare drops – signaling an ideal time to book. Hudson suggests creating a price alert a few months prior to your ideal departure date so you will be informed when an attractive deal pops up.

Research prices at all airports.

Save time and money by leaving your car at home over the holidays. Spagnola suggests relying on a ground transportation company or asking a family member to give you a lift to avoid unnecessary hassle and sky-high fees around the holidays. Airport parking eats into your travel budget and schedule, he says, adding that “even using an off-site parking company can add up to 30-45 minutes to get you to your gates.” At Ronald Reagan Washington National Airport, for example, parking costs $17 per day. Plus, if you can’t find a spot, you could be left in a time-crunch, he adds. Another option: Rely on public transportation, or Uber, Lyft or another affordable ride-sharing service.

Look at all fare options.

Let’s be clear: If you’re looking for added frills (or legroom), skip purchasing a Basic Economy bare fare option, which offers no seat assignments or full-size carry-on bags. But if you’re a price-sensitive flier seeking the lowest fare, research competing basic fares among legacy carriers (United, Delta and American) to compare with airfares offered from low-cost carriers (Spirit and Frontier), Spagnola says. Just keep the caveats in mind. With United’s Basic Economy product, for example, families aren’t able to sit next to each other. And depending on your desired route, low-cost carriers may offer more enticing deals around the holidays, or the Basic Economy class pricing may be comparable to Economy class fares.

If landing the best values is a top priority, consider lengthening your vacation. The peak season will last from Dec. 16 to Jan. 7, yielding about three weeks of expensive airfares, Spagnola says. “If there is the possibility of only using half of your ticket in this window, you will be able to save money,” he explains. For instance, jet-setting from a major New York City hub to Los Angeles International Airport from Dec. 30 to Jan. 8 “would be much cheaper than traveling until January 7th for the return,” he says. “By shifting your departure date up a day or two or tacking on a Sunday, you can yield generous savings,” Hudson adds. 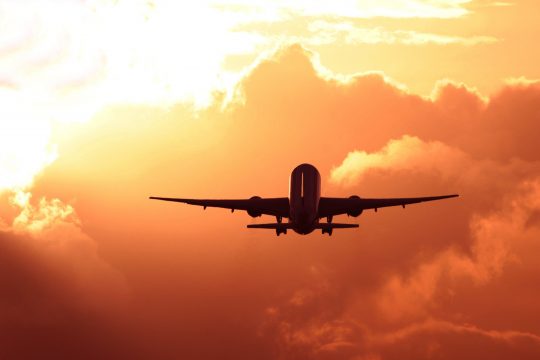