Hawaii resort is bringing the Islands’ culture to its guests

WAILEA, Hawaii — Although I didn’t once venture outside of the resort during a recent two-night stay at the Four Seasons Resort Maui at Wailea, the sense of FOMO I expected to feel around that decision never materialized.

Of course, there’s little pressure to leave the 15-acre, 383-room oceanfront property when the alternative means relaxing in an oceanview cabana with a bottle of Veuve Clicquot on ice or sampling cocktails and fresh ahi tuna appetizers at Spago Maui, one of several excellent dining venues at the resort.

Still, I expected a tiny voice in the back of my brain to surface at some point, chastising me for not experiencing more of the island.

I eventually realized, however, that at the Four Seasons Resort Maui, the island comes to you. In fact, it’s nearly impossible not to encounter Hawaii’s famed “aloha spirit” in some way, shape or form while on the property, even during the shortest of stays.

That’s largely due to the fact that, throughout the pandemic, the Four Seasons Resort Maui transformed itself into something of a cultural hub, offering everything from traditional fire knife dances to “strolling” ukulele performances on a weekly basis.

At the helm of this effort is the property’s director of Hawaiian programs, Wendy Tuivaioge, or “Aunty Wendy,” as she’s colloquially called.

“As we were coming back from the pandemic, we had to look closely at what we were offering our guests,” Tuivaioge said. “They were coming here, but they weren’t leaving [the resort], because they wanted to stay in their own bubble.”

And because shows and activities throughout Maui were operating at limited capacity during the early phases of Hawaii’s tourism rebound, even those willing to venture out found it challenging to book off-property experiences.

As a result, Tuivaioge began looking for ways to bring some of the best experiences Maui had to offer to the resort, launching what became known as the property’s Live Aloha initiative last fall.

For Tuivaioge, no moment was too small to turn into a cultural exposure opportunity.

“One of the first things we did was bring in strolling musicians,” she said. “A lot of our guests would come in before their rooms were ready, so they’d be in the lobby, sitting by the pool or having lunch. So we hired musicians to play Hawaiian music [while guests waited].”

Also born out of the program was the resort’s popular Live Aloha market, where local vendors sell goods as part of an on-property, open-air bazaar.

A boon to the community

Tuivaioge said that programs such as these have had the added benefit of providing an economic boost for the community.

“A lot of our musicians were hit hard, because they weren’t working [during the pandemic],” she said. “And as for the vendors, we’re not charging them for their spot. We set up the tables, but everything they make is theirs.”

Although Live Aloha was initially set to run for six weeks, overwhelmingly positive feedback led management to extend the program. The initiative, now running at least through the end of 2022, continues to evolve.

Earlier this year, Tuivaioge, who is a trained haumana (student of hula), worked to bring her competitive hula group, Halau o Ka Hanu Lehua, to the resort as part of a “Behind the Scenes of Hula” experience. Guests are invited to watch as the group practices, led by kumu hula (hula teacher) Kamaka Kukona.

“We practice at the halau, which is our school of dance, and if you’re not a dancer and part of the halau, you’re not allowed to enter,” said Tuivaioge. “What guests are seeing isn’t a performance — it’s an actual practice.”

Even more programming, such as a “Teatime with Aunty Wendy” session showcasing local tea producer Polipoli Farms, is under development.

Tuivaioge said this push is a major differentiator for the property, especially as competition for pent-up tourism demand heats up.

“We have a beautiful resort and beach, but so does Mexico, so does Costa Rica. But what we have that they don’t is our aloha spirit and the Hawaiian culture,” she said.

“It’s very important that our guests feel that, because that is what’s going to make them want to come back.” 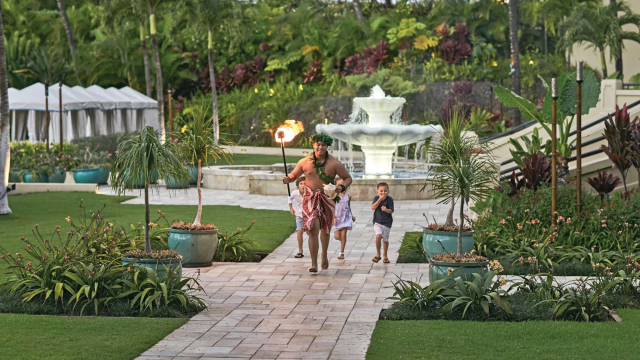