“Finished with Engines” I called to the Officer in the center of the Navigating Bridge
from my conning position over on the port side Bridge wing.

Another smooth arrival into New York’s Brooklyn Cruise Terminal for Queen Mary 2
had just taken place, after yet another of her signature Transatlantic Crossings from
Southampton, England.

I bade farewell to our New York Harbor Pilot as he left the Bridge and once again I
contemplated on how fortunate I was to be Master of the most famous Ocean Liner in the
world. If anyone had told me as a brand new 16 year old Navigating Cadet joining my
very first cargo vessel back in 1977 that my career at sea would culminate in this
position, I simply would not have believed them!

My very first trip to sea as a Cadet saw me join a vessel named London Baron which was
of a type known as a Bulk Carrier, in the port of Montreal, Canada. A long way from
home for a youngster who had hardly left his native England at that stage of life!

But what drew me to the start of my seagoing career? Well, I believe that growing up in
the seaside town of Folkestone on the South-East coast of England and right on the
shores of the English Channel had a great deal to do with it. In my childhood, Folkestone
was one of the Cross Channel ferry ports with ferries leaving for the port of
Boulogne-Sur-Mer in France every few hours. These were sizable ships, able to take not
only foot passengers, but cars and trucks as well. In fact, for a time the famous Orient
Express train brought passengers down to Folkestone from London to embark the ferry to
France and then take the French Orient Express train to Paris or even Venice, Italy.

I was captivated to watch the ferries manoeuvring outside the harbor entrance from my
vantage point on the cliffs above the sea at Folkestone – just a five minute walk from my
childhood home. They used to arrive outside the harbour, swing around 180 degrees
before coming astern (in other words reverse) into the harbour to berth alongside the pier.
I was enthralled to imagine that one day I too might be able to manoeuvre a ship so
skillfully.

There was another reason I wanted to go and work at sea too, but that perhaps is a story
for another day.

But back to business, because now all the mooring ropes were “made fast”, the gangway
was being prepared and it was time for me to go over to the public address microphone to
make my final broadcast to this particular group of nearly 2600 Queen Mary 2 guests to
tell them that we were now safely alongside the berth in New York and to wish them a
safe onward journey to their final destination. And of course to say that we hoped to see
them back on board a Cunard vessel in the very near future!
Cunard voyages are after all very addictive!! 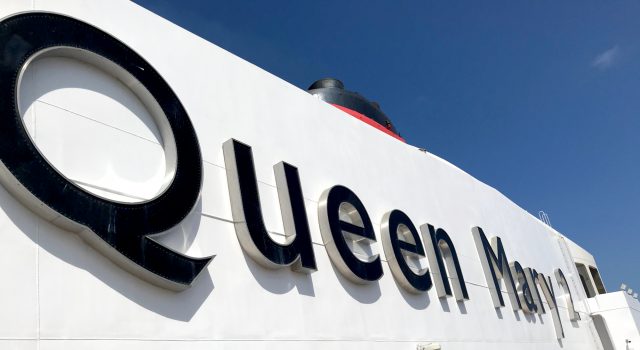