Should You Give Up Your Seat on an Overbooked Flight?

You may be entitled to extra compensation if your flight is oversold.

United Airlines caused a stir last week when footage taken by other travelers of local authorities brutally dragging a passenger from his seat before a flight from Chicago to Louisville, Kentucky, went viral.

While the company’s CEO, Oscar Munoz, apologized and vowed to halt using law enforcement to remove passengers already aboard planes to secure seats for employees, the incident has spurred questions about airline policies and prompted heightened scrutiny over the industrywide practice of overselling flights. But while last week’s incident took the internet by storm, it’s not all-too-uncommon for carriers to bump passengers due to overselling tickets or, like last week, accommodating crew members flying for work. According to the Department of Transportation, 40,629 passengers were involuntarily denied boarding from their U.S. flights due to overbooking in 2016.

By law, airlines have the right to remove passengers from their planes for a variety of circumstances and must outline their policies in their customer agreement in a contract of carriage. “Airline contracts of carriage do state that your seat isn’t guaranteed, and there is language in them to cover refusing to fly someone at [the airline’s] discretion,” explains George Hobica, founder of Airfarewatchdog.com. “Passengers have far fewer rights than they imagine,” he adds.

But flyers do have some federally-mandated rights. For this reason, U.S. News tapped aviation experts to help you navigate air-travel policies and learn how to negotiate top dollar on an oversold flight.

Want to Avoid Getting Bumped? Get to the Top of the Priority Boarding List

DOT policies require that the airline first ask for passengers to volunteer to switch flights before compensation rules for involuntary bumping go into effect, says Charles Leocha, chairman and co-founder of Travelers United, a nonprofit advocacy group in the District of Columbia that works with the DOT and Congress on passenger rights issues. Whether you’re at risk of getting bumped is determined by each carrier’s priority boarding list, which defines groups of passengers that will be removed in the event of an oversold flight and is written (in the fine print) in the contract of carriage, Leocha explains. Despite contrary belief, the order in which passengers are selected to be involuntary denied access is not random, he explains. For example, United’s priority list is based on factors such as the fare purchased, frequent flyer status, the check-in time and the itinerary.

The most important step is getting a seat assignment, cautions Daraius Dubash, who runs the travel advice site Million Mile Secrets. To limit your odds of getting involuntarily bumped, he recommends checking in at least 24 hours before your flight, getting to the boarding gate on time with a seat assignment and avoiding no-frills basic economy fares. With status, you’re less likely to be bumped, explains Gary Leff, author of frequent-flyer site View From the Wing. Leff advises arriving at the gate early, as seats aren’t given away typically until about 15 minutes before departure and your check-in time may be a tie-breaker.

Before you willingly switch flights when a gate agent asks for volunteers, make sure you’re clear about the conditions, Leff cautions. While you would be entitled to a substitute flight and could receive a voucher or a free ticket for another flight, you may be forgoing negotiating power and additional compensation. If you volunteer, you’re only entitled to what’s been offered by the carrier. And while some carriers ask you what price you’ll give up your seat for – allowing you (and fellow passengers) to bid for a higher class of service – if there are other volunteers, the carrier may not be as accommodating, he says. Once passengers accept the benefits outlined as volunteers, they “waive rights for future compensation,” explains Henrik Zillmer, CEO of the site AirHelp.com.

But if there simply are not enough volunteers who agree to a voucher and a later flight (rather than cash), you may be denied boarding because the flight is full. In a scenario in which you’re involuntarily bumped, the “law states that the airline has to inform the passenger who is denied boarding what their rights are,” Zillmer says. This information should also be provided in writing, Loecha adds. The passenger rights and vouchers available for voluntary denied access vary by carrier, and they often come with caveats, such as time-sensitive vouchers for future flights that expire within a year or restricted days and fare classes for using the vouchers, Loecha explains. And while the carrier is required to provide an alternate flight option, you may be put on standby or the substitute flight might not be suitable. If you would book your own substitute flight reservation to reach your final destination, you may request an “involuntary refund” to be compensated for the original cost of your ticket.

Negotiate for the Highest Price If You Get Involuntarily Bumped

If you are required to change flights and your new flight arrives more than one hour later than your original arrival time, the airline is required by law to compensate you with 200 percent of the original price paid with a $675 limit. The amount you can receive depends on when your switched flight reaches your final destination. If you arrive more than two hours later than your scheduled arrival time, the carrier must compensate you up to 400 percent of the one-way fare, with a federally mandated $1,350 cap. In the case of the United incident, the flight staff offered passengers $800, four times the one-way fare, Leocha explains. What’s more, bumped passengers must be compensated in cash, not a voucher, according to DOT guidelines, he adds. At the time of denied boarding access, remember “you have a right to a refund of your ticket in addition to the payout,” Leff says. A full list of rules and restrictions for compensation are available on DOT’s website.

Keep in mind there are caveats when seeking compensation for an oversold flight. For example, if you’re bumped for a reason other than overbooking (think: a delay or cancellation), or the carrier decides to switch to a smaller plane, you won’t have the same federal benefits. On smaller 30- to 60-seat airplanes or in the event of an equipment swap, the same rules do not apply for involuntary or voluntary denied boardings, Leff explains. And if you arrive in under an hour to your final destination, the carrier is not required to give you anything for the hassle. On international flights departing from the U.S., you’ll only receive compensation up to 400 percent of your fare (at a $1,350 cap) if your flight arrives more than four hours later than its planned arrival time, Loecha cautions. 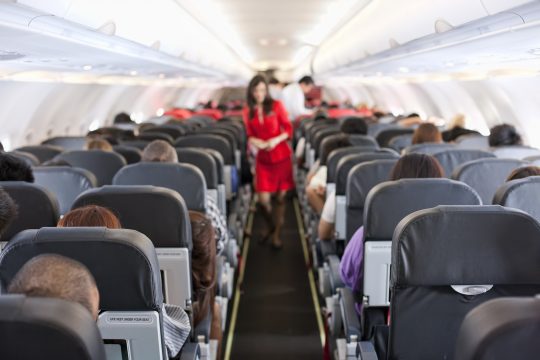