The 13 Best Places to See the Northern Lights

These destinations will inspire even the most experienced aurora chaser.

The northern lights, also known as the aurora borealis, are a spectacular natural light show visible at certain times of the year in the northern hemisphere. This phenomenon occurs when electrically charged particles from the sun enter the Earth’s atmosphere and collide with gaseous particles, such as oxygen and nitrogen. The experience is surreal, with vibrant hues of blue, green, pink and violet dancing across the night sky. The best places to see the aurora borealis offer little to no light pollution, clear skies and no precipitation. Many top viewing spots have websites with aurora trackers and staff members at some hotels will wake up visitors when the lights appear (if requested). Read on to discover the top destinations where you can see the kaleidoscopic northern lights.

Fairbanks is one of the best places in the world to view the northern lights as it’s located directly under the Auroral Oval. This ring-shaped zone sits over the Earth’s geomagnetic north pole, where aurora activity is concentrated. Visitors can expect to see the lights on an average of four out of five clear nights during aurora season, which lasts from Aug. 21 to April 21. Other activities visitors can enjoy in late summer include a ride on the Riverboat Discovery or panning for gold. For a festive holiday experience, visit the Santa Claus House in the city of North Pole (around 13 miles southeast of Fairbanks). Travelers can also see ice sculptures in February and March at the impressive World Ice Art Championships or take a dog sledding or snowmobiling tour. For excellent chances of aurora viewing, book accommodations at the upscale Akaurora Villa. 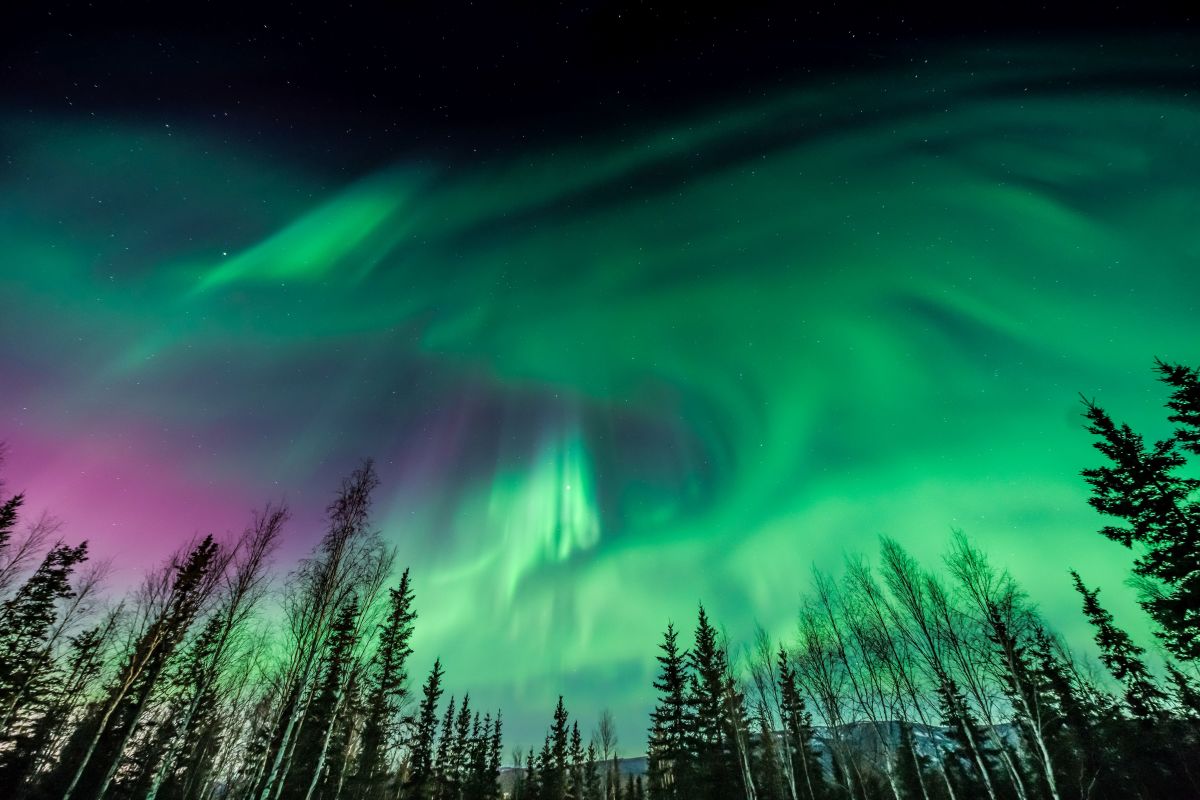 Located above the Arctic Circle, Tromsø is one of several top spots to view the northern lights in Norway. The northern part of the country is dark in the early afternoon until late morning, from the end of September to late March. With this extreme darkness, there are more opportunities to see the aurora. Tromsø itself is a modern city, so there’s plenty to see and do when you’re not looking up at the sky, including a visit to the beautiful Arctic Cathedral. In late January to early February, the city hosts the Northern Lights Festival, a 10-day music and performing arts event featuring everything from singers and ballet dancers to symphonies. Aurora chasers can view the lights on their own, opt for a guided Northern Lights Safari or go on an exhilarating husky trekking tour in the Arctic wilderness. 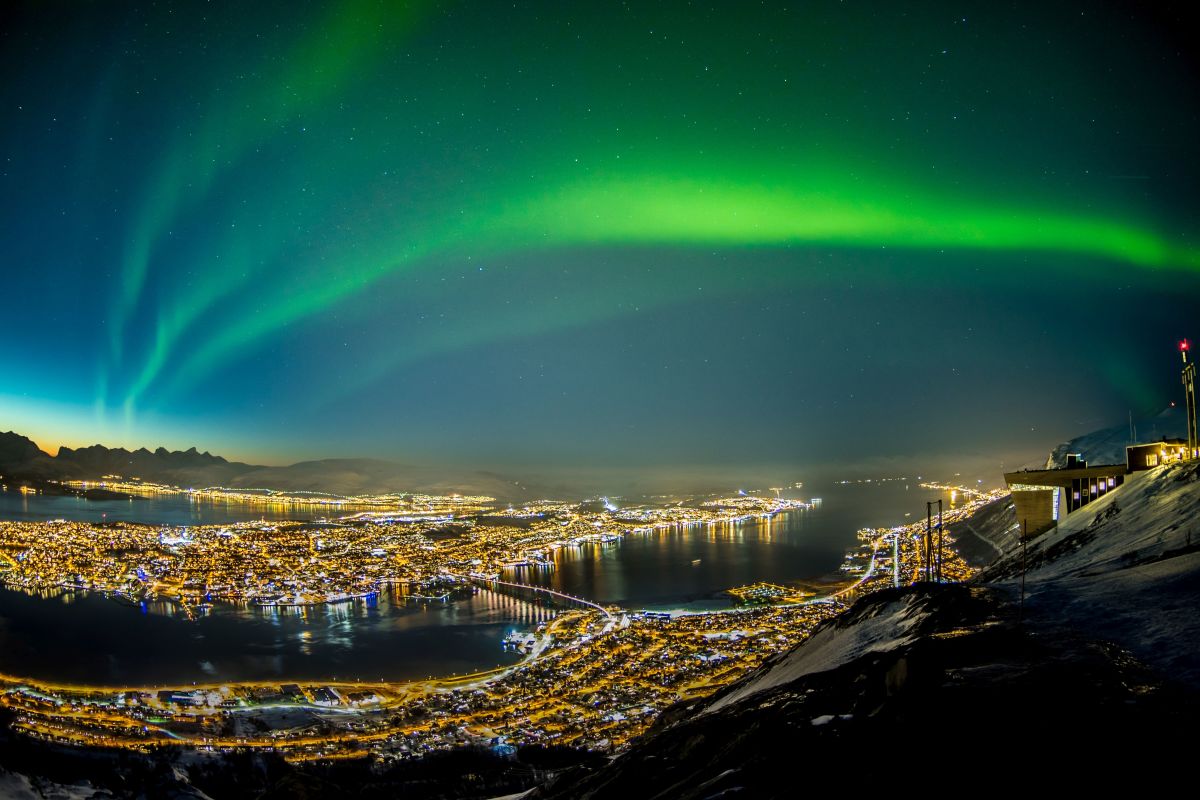 Lapland is located in the Arctic Circle in Northern Europe. The northern lights are visible approximately 200 nights a year from this region in Finland. Lapland is also known as the home of Santa Claus, the Sámi people (the only indigenous people in the European Union) and as many as 190,000 reindeer. Aurora chasers can expect to see the lights every other clear night between September and March in northern Lapland, especially when the stars are out. For a bucket list experience, watch the impressive light show from a glass igloo at Santa’s Hotel Aurora in Luosto. This resort town is approximately 70 miles north of the town of Rovaniemi and is set among the picturesque and hilly landscape of Pyhä-Luosto National Park. 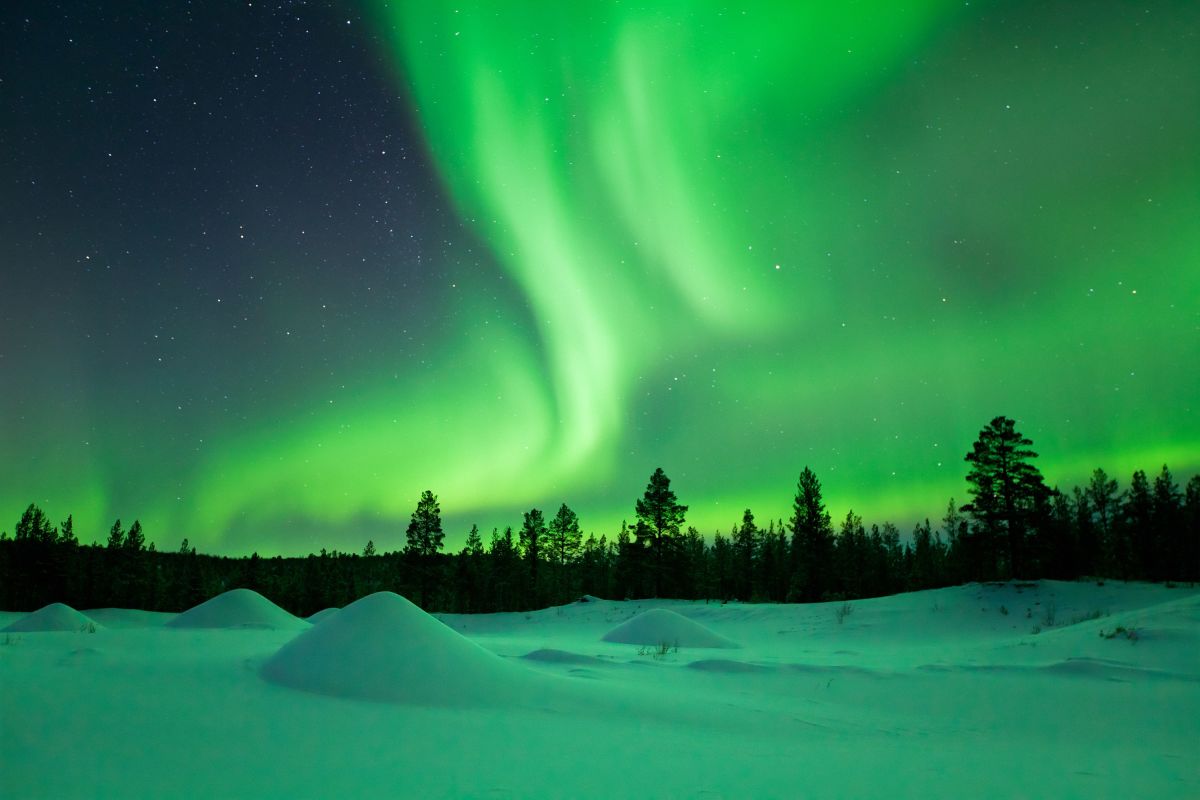 This group of captivating islands, located on Scotland’s remote northern coast, is one of the best places to see the northern nights in the country. Fall and winter are the best seasons to witness the aurora, also known in local dialect as the “Mirrie Dancers.” This time of year brings cold evenings with clear skies, which makes for ideal viewing conditions. A few places to see the spectacular light show include from the top of Wideford Hill, along the coast in Birsay or on the beach at Dingieshow. In addition to the aurora, Orkney is home to breathtaking coastal landscapes and more sheep than you can count. Travelers can also visit the Heart of Neolithic Orkney, a UNESCO World Heritage Site, which includes several monuments dating back 5,000 years. While here, plan to stay in the historic town of Kirkwall, the capital of the Orkney Islands. 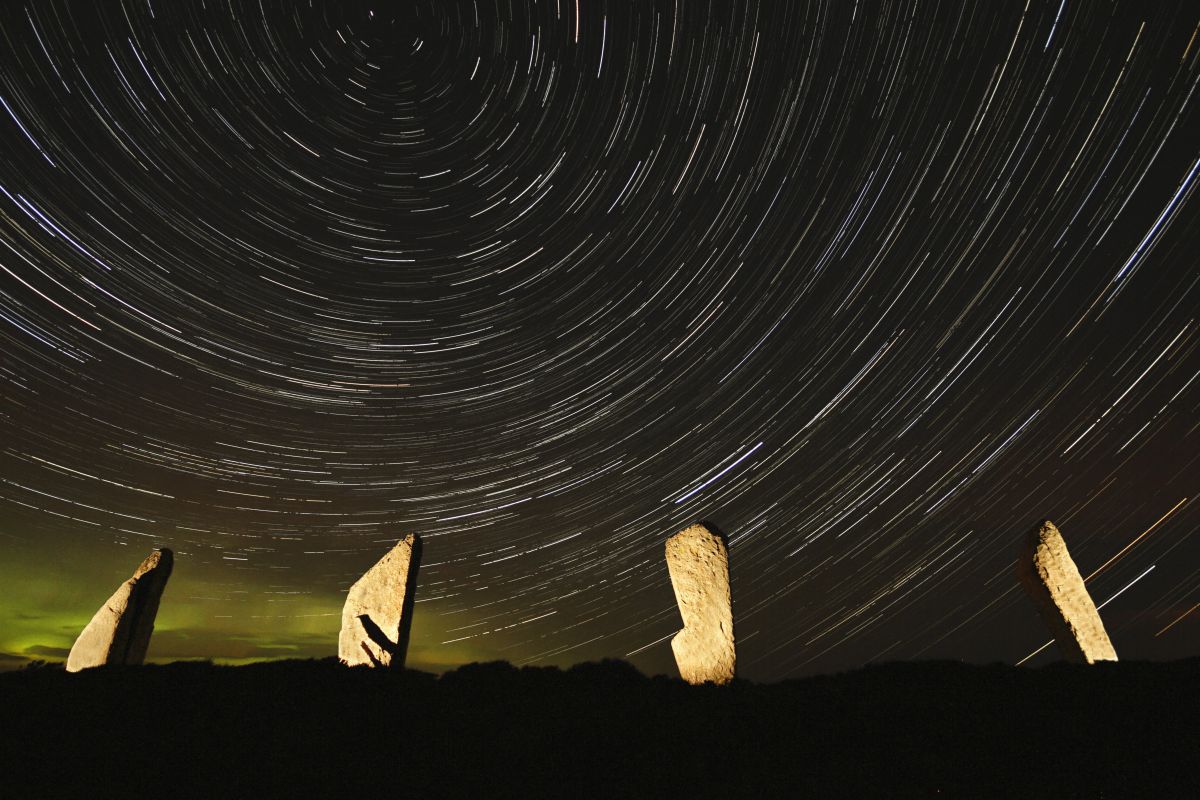 Yellowknife is the capital of Canada’s Northwest Territories. It’s also known as the Aurora Capital of North America. With its position in the middle of the Auroral Oval, the city puts on one of the world’s most awe-inspiring light shows from January through March. Located on the northern shore of Great Slave Lake, Yellowknife boasts winter sports such as ice fishing and cross-country skiing. At the end of March, as temperatures begin to warm, Yellowknife hosts the Long John Jamboree on Yellowknife Bay. The event’s festivities include sugar shacks, ice carving and dogsled races. For a once-in-a-lifetime experience, make reservations to stay in a teepee at Aurora Village to view the lights. The property offers aurora-themed tours and packages that include activities like dog sledding and snowmobiling. 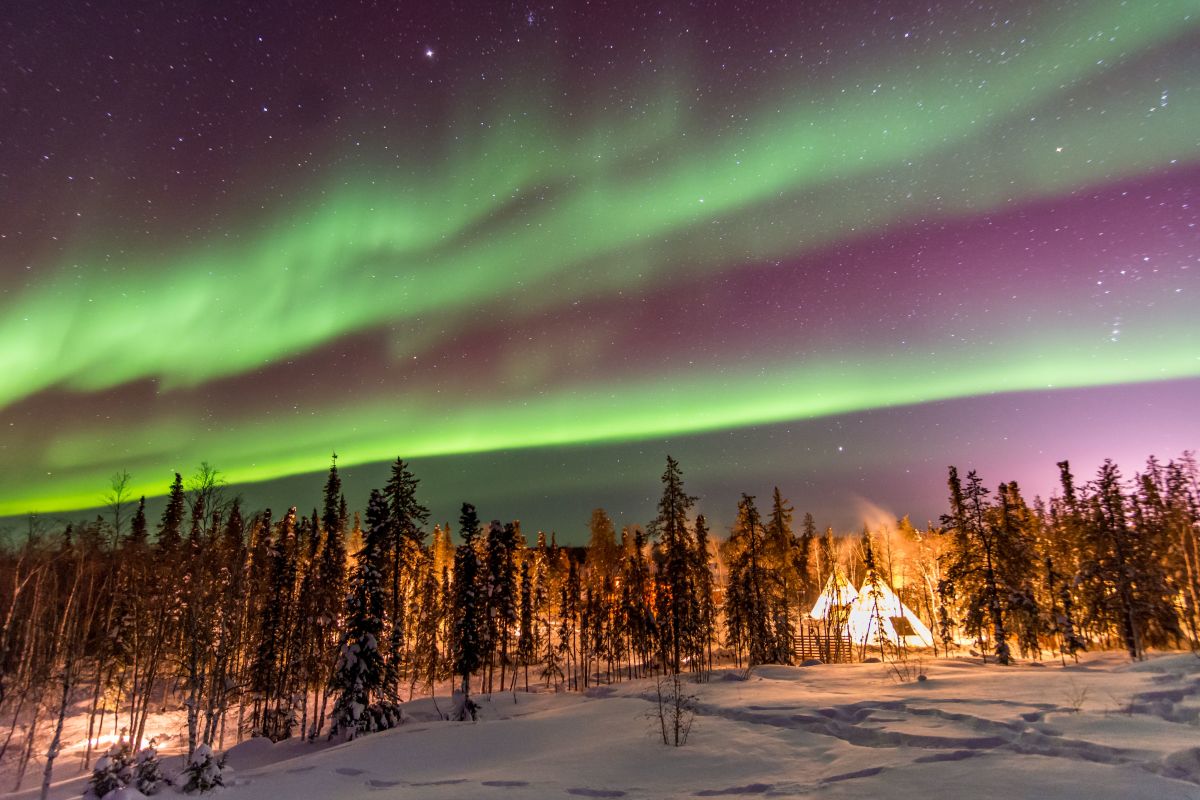 The optimal time for viewing the northern lights in Sweden is during the darkest months, from December through March. In the northern part of the country, in Swedish Lapland, visitors can see the illuminated skies from late August or early September to mid-April. The small Swedish village of Jukkasjärvi sits approximately 125 miles above the Arctic Circle on the Torne River and is an ideal locale for aurora viewing. Book accommodations at the world’s first ICEHOTEL in a year-round warm suite in the new ICEHOTEL 365. If you’re up for an adventure, reserve one of the artist-designed cold suites with temperatures as low as -8 degrees Celsius. The rooms are sculpted of ice and include beds with reindeer hides and thermal sleeping bags. During your stay, take advantage of the guided Northern Lights Safari and late-night trek to the hotel’s Camp Aurora. 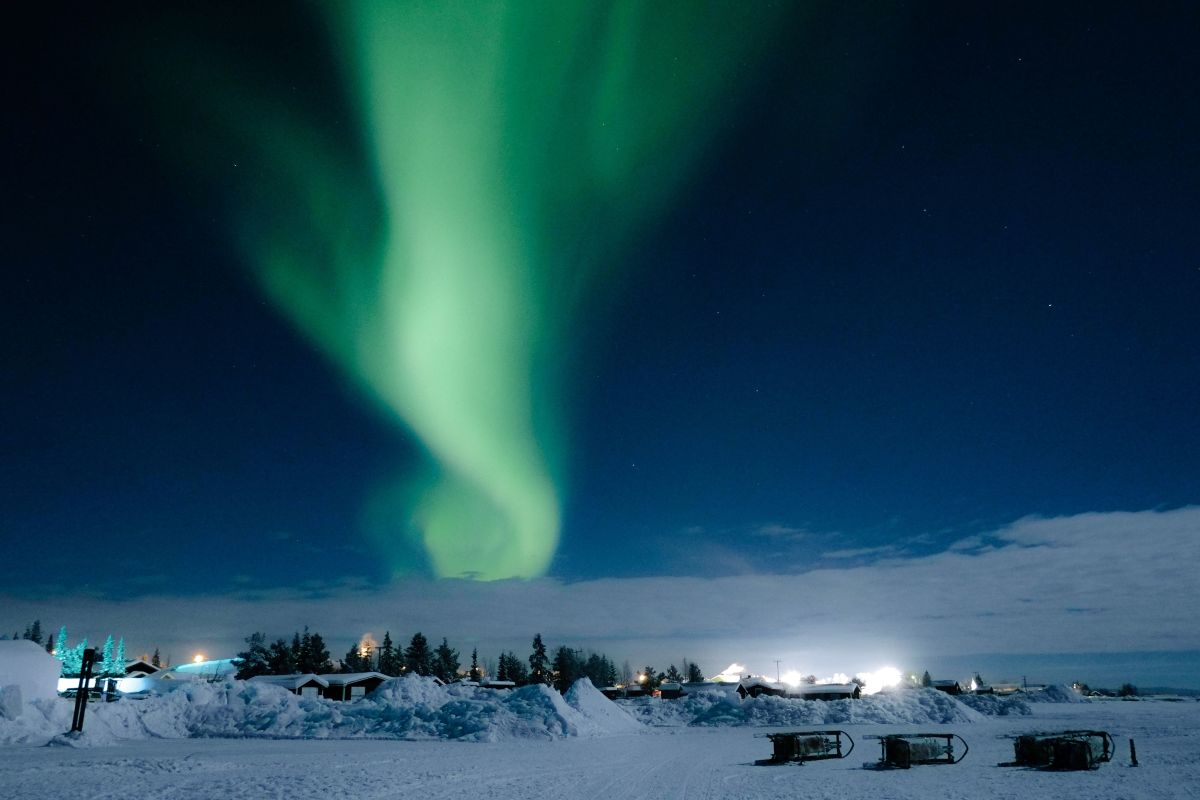 September to April is the best time to chase the aurora borealis in Iceland. For optimum viewing away from the light pollution, head to Öskjuhlið. This densely wooded area in Reykjavik has walkways and paths where you can see the nighttime show. Atop of this forest sits Perlan, which is the only planetarium in the country and a museum featuring exhibits about Iceland. Don’t miss the panoramic views of the city from the observation deck on the fourth floor of Perlan. From it, visitors can see the Snæfellsjökull glacier, Keilir Volcano and the mountain of Reykjavik, Esja. While here, splurge on an overnight tour with Buubble.com. This experience includes several sightseeing spots and a night spent under the magical northern skies in a bubble at the 5 Million Star Hotel. 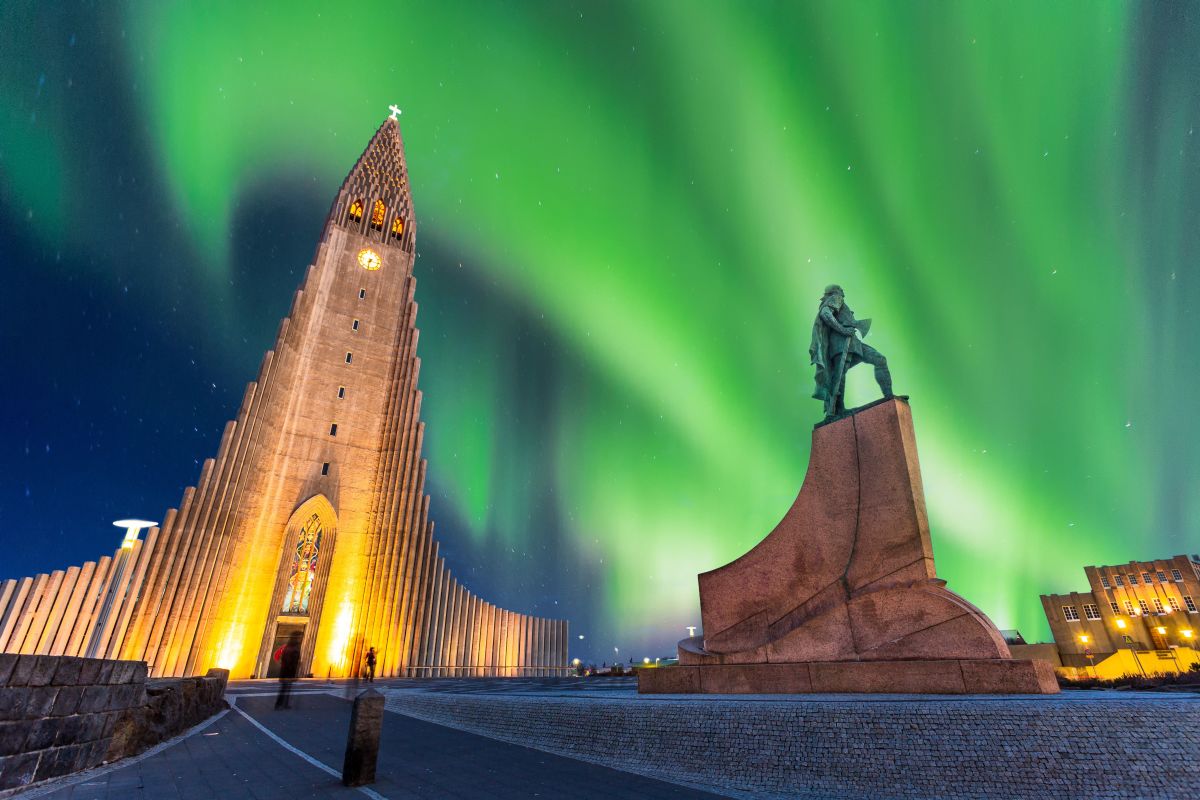 Greenland may not be the most accessible place to travel for viewing the northern lights, but those who make it there will be thrilled they did. The tundra of Kalaallit Nunaat (the Greenlandic name for the country) is one of the best places on the globe to see the aurora. The viewing window extends from September to the beginning of June, when you can then enjoy the midnight sun. The tiny town of Kangerlussuaq is located on a fjord right along the Arctic Circle. The 300 days a year of clear skies make it an ideal spot to see the lights, especially between October and April. The town, a former U.S. air force base, is also home to the Greenland Ice Cap. 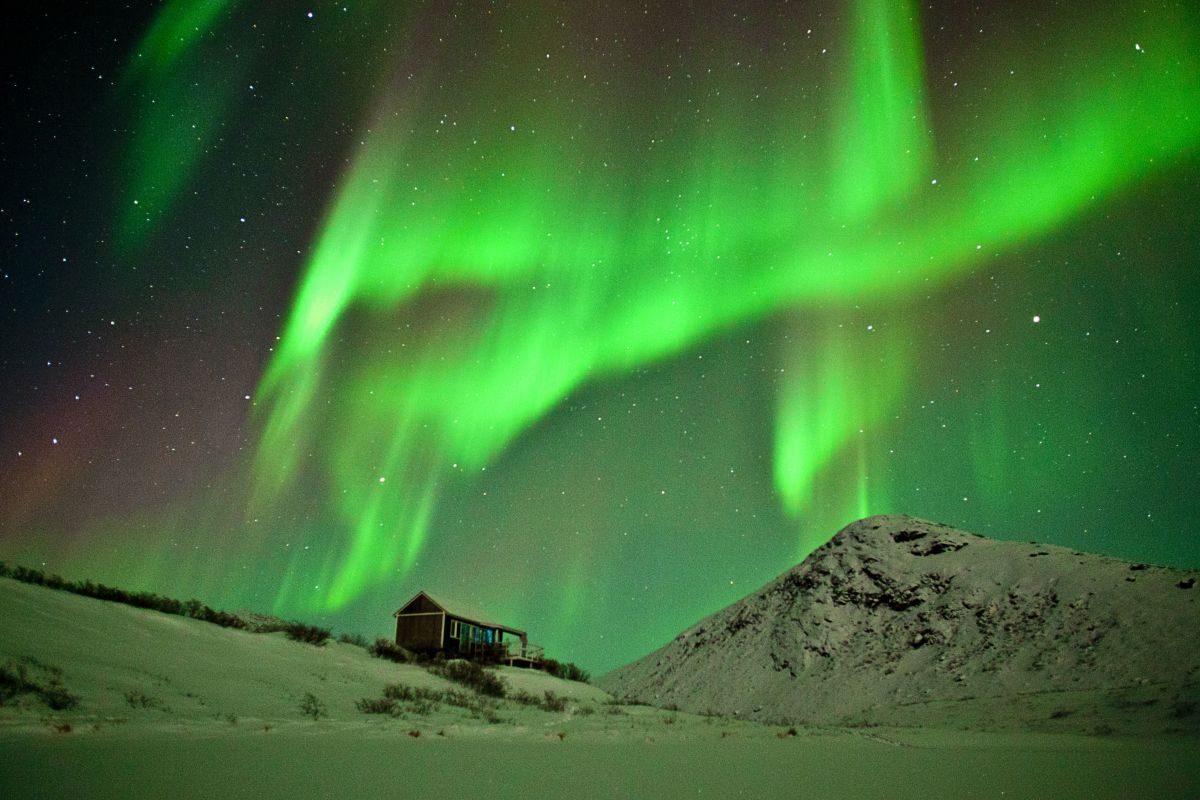 The Upper Peninsula of Michigan boasts one of the top northern lights viewing locales in the U.S. during the spring and fall, and impressive astronomical shows in the warmer months. Throughout the summer, the Milky Way is visible across the sky and late summer evenings entertain visitors with meteor showers. Travelers can splurge on a stay at the Mission Point Resort on Mackinac Island at the confluence of Lake Michigan and Lake Huron. The resort’s staff will notify guests of potential northern lights sightings. The Headlands International Dark Sky Park, located in Mackinaw City, is another draw situated nearby. The park was one of the first 10 International Dark Sky Parks in the world and is the perfect spot to gaze at the aurora. 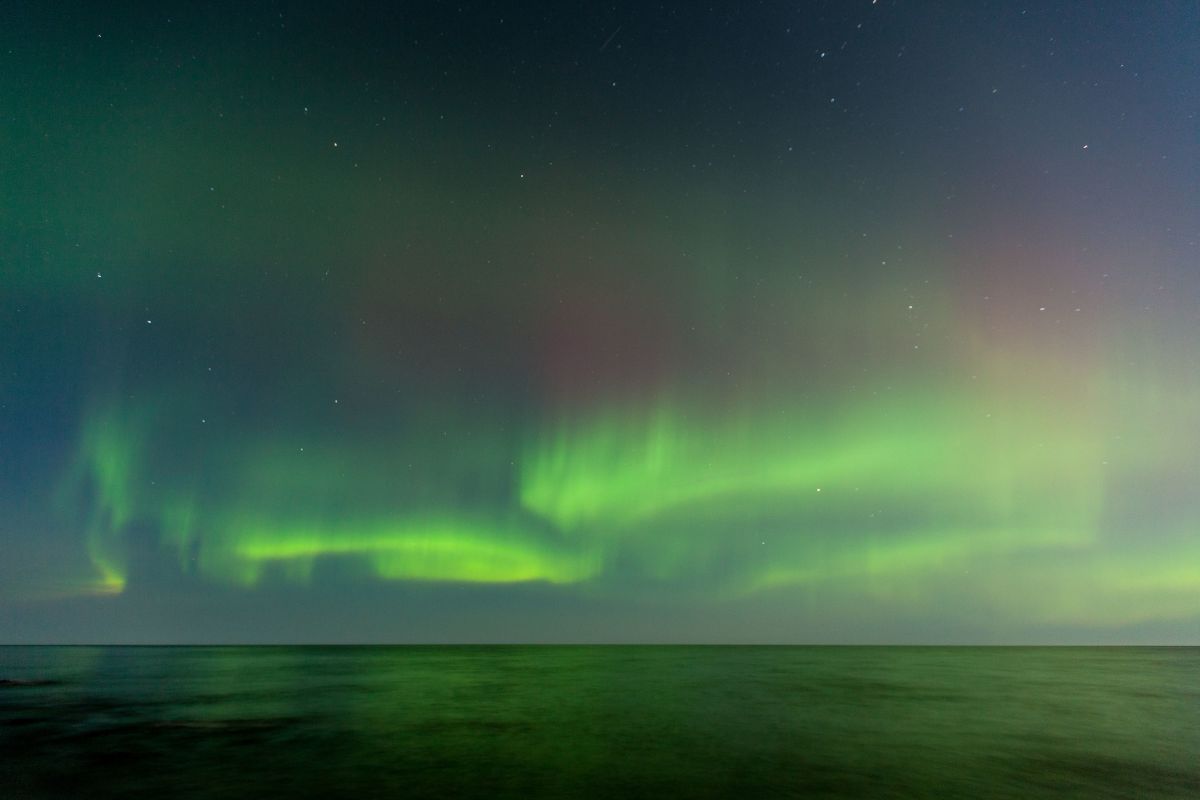 The aurora season on the Kola Peninsula in northeastern Russia extends from late August until April, but winter is the best time to see the lights. This is because the region, which sits within the Arctic Circle, boasts 42 polar nights, meaning the area is shrouded in total darkness for more than 24 hours. It’s also one of the more temperate and accessible regions in Russia where you can chase the aurora. The best place to view the lights on the peninsula is from the small port city of Murmansk, which is located in the northwest part of the region. To see other parts of the region, opt for an eight-day tour with Russia Discovery. This package includes viewing the northern lights, visiting the tundra and coastline of the Arctic Ocean, meeting the indigenous Sámi people, snowmobiling in the Khibiny mountains and exploring St. Petersburg. 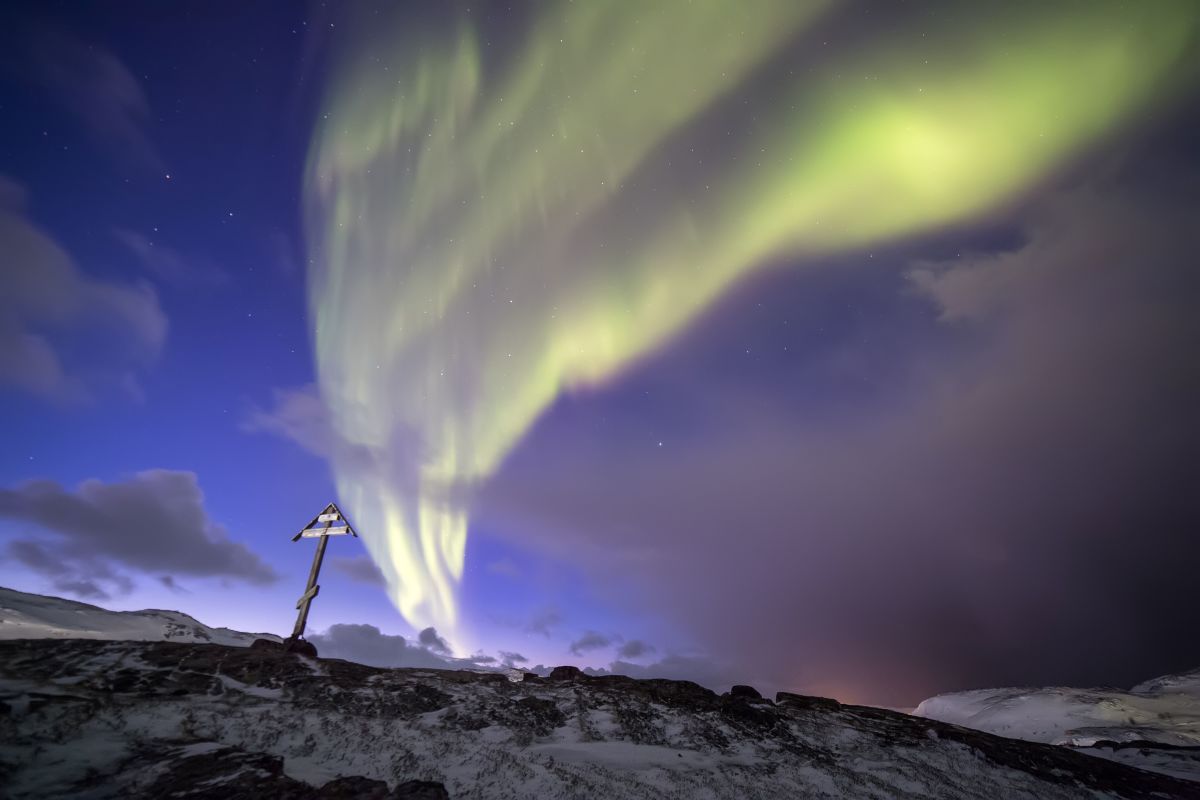 Several destinations in Estonia are popular with local aurora chasers, but Saadjärv is known to have the most consistent sightings during the winter months. The town is located approximately 14 miles north of Tartu in Tartu County of central Estonia. It’s situated on Lake Saadjärv, which is one of the 10 deepest and largest lakes in the country. It’s also close to the Vooremaa Nature Park, so there’s plenty to do in the region when you’re not watching the lights dance in the sky. The lake is a major recreational area with beaches, places to stay and museums, such as The Ice Age Centre. You can also visit Alatskivi Castle, go snowshoeing in the Männikjärve bog or explore Elistvere Animal Park. 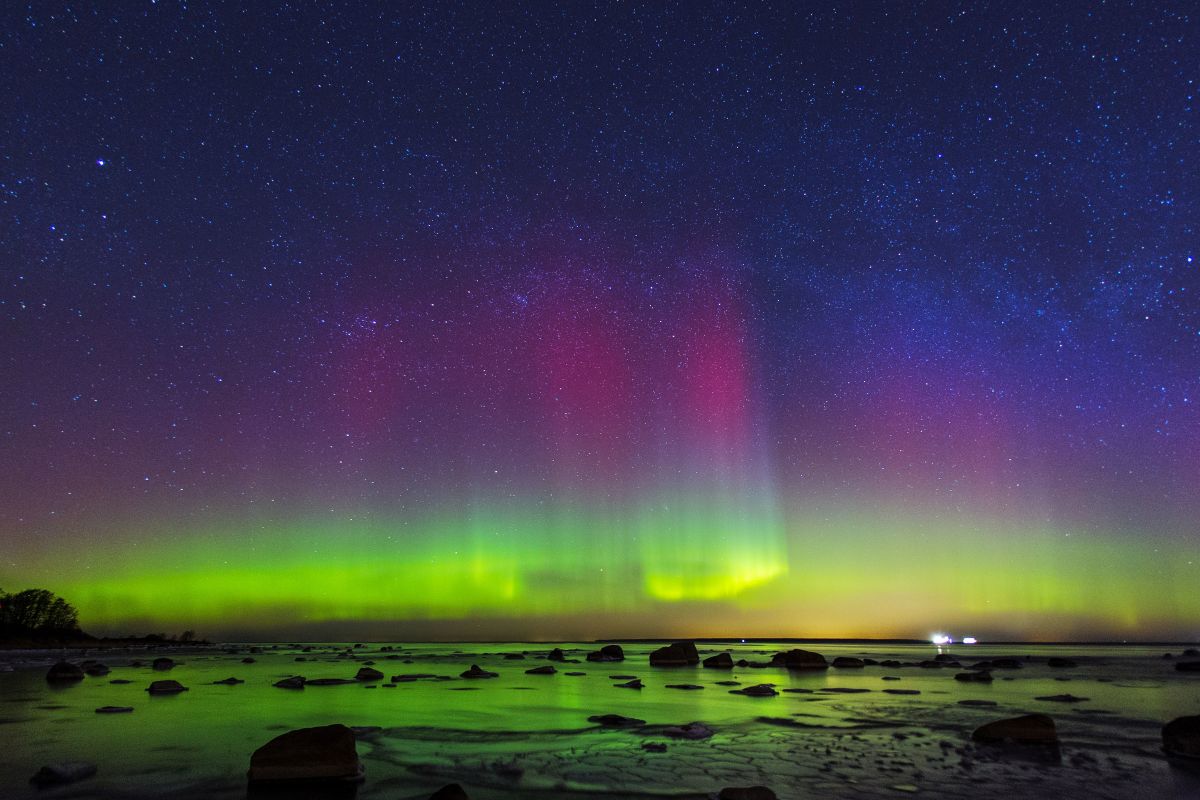 A Viking Ocean Cruise Along the Coast of Norway

Embrace the winter and set sail for the Arctic Circle to experience the aurora in northern Norway. This 13-day itinerary departs from London for the North Sea with stops in ports of call that are top aurora-viewing locales, including Bodø, Tromsø, Alta and Narvik. The cruise ends in Bergen. While on land, take in the natural beauty of the snow-blanketed landscapes and book bucket list excursions like a night spent in an igloo or a reindeer sledding adventure. You can also chase the lights into the wilderness by snowmobile, take a dogsled ride under the stars or view them from a Sámi tent atop Mount Pæskain in Alta. This Viking Cruises itinerary is offered from mid-January to mid-March. 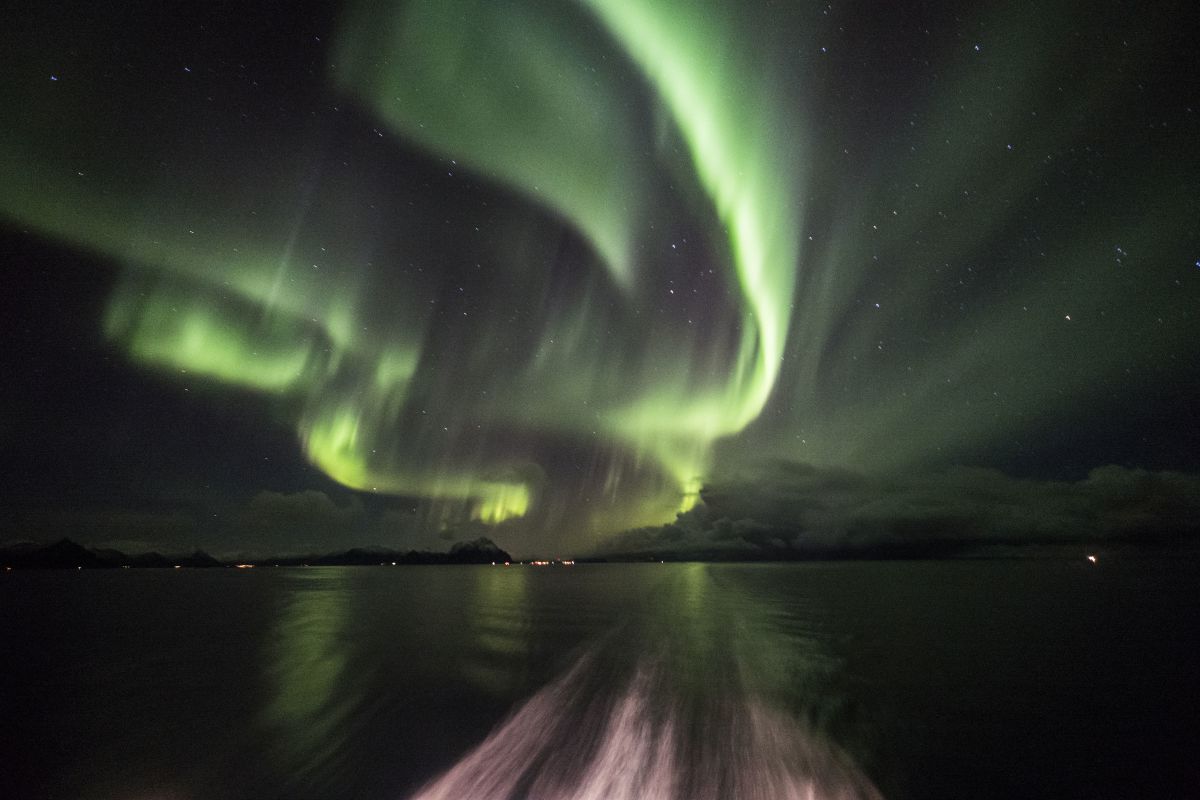 A Cruise & Maritime Voyages Trip to Iceland and the Faroe Islands

Sail round-trip from Liverpool to the “Land of Fire and Ice” in search of the northern lights this October. This journey with Cruise & Maritime Voyages includes stops in two Iceland ports, plus Tórshavn in the Faroe Islands, Dublin and Belfast. There are a total of four days in Akureyri and Reykjavík, Iceland, where you can see the magical lights as they appear in the sky. The picturesque town of Akureyri is located on the end of the longest fjord in Iceland, Eyjafjördur. It also boasts the northernmost golf course and northernmost botanical garden in the world. Excursions include exploring Iceland’s unique rock formations, visiting the beautiful crescent-shaped Godafoss Waterfall or spending time at the Laufás Folk Museum. 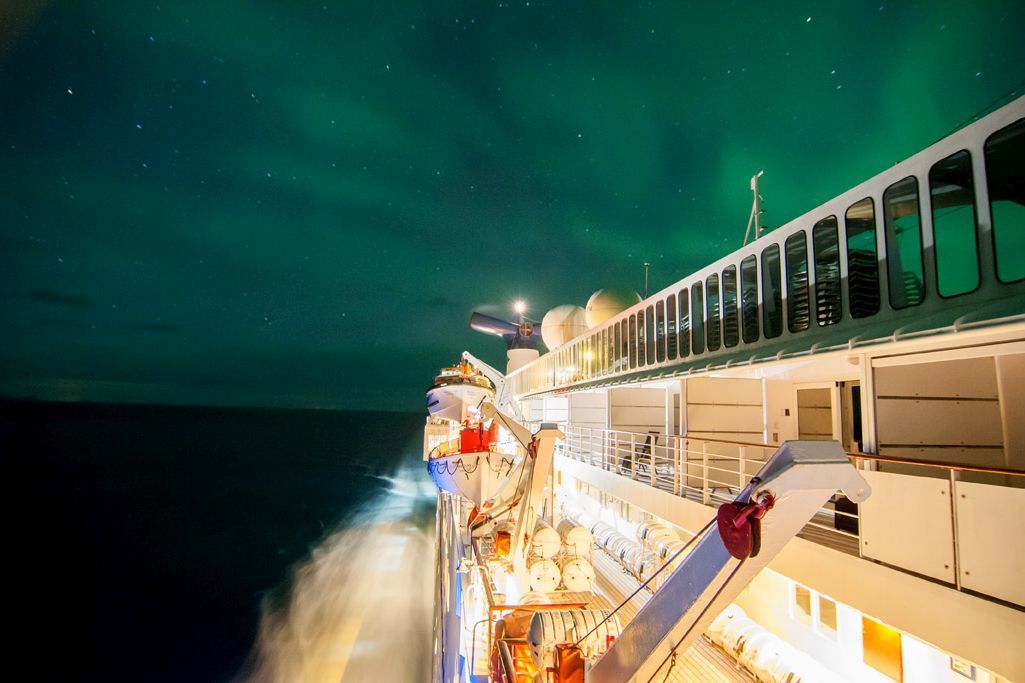 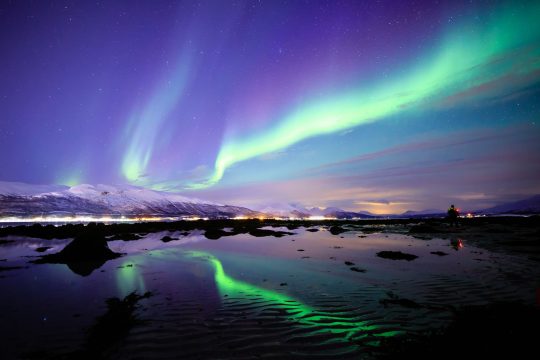