The 14 Most Exotic Black Sand Beaches in the World

Ditch the typical white sand beaches and try something new.
Found in Hawaii, Iceland, the Canary Islands and other destinations around the world, black sand beaches intrigue travelers with their mystery and beauty. These beaches form over time by the erosion of volcanic minerals and lava fragments combined with the ebb and flow of the ocean’s tide. Several offer otherworldly landscapes or top-notch surfing. Others are remote and more challenging to reach. Located everywhere from exotic warm weather destinations to colder climates close to the arctic, these 14 black sand beaches are worth the trek. (Getty Images)

Ficogrande: Stromboli, Aeolian Islands, Italy
Stromboli is the furthest Aeolian Island north of Sicily and its active volcano has been erupting continuously for more than 2,000 years. With this volcanic activity, the island is home to several black sand beaches as well as secluded coves accessible only by boat. One of the best-known beaches, Ficogrande, offers visitors lounge chairs, umbrellas and concession stands. It’s worth a visit to take in the impressive views of Strombolicchio, a volcanic rock, with the backdrop of the black sandy beach and sparkling blue waters of the Tyrrhenian Sea. (Getty Images) 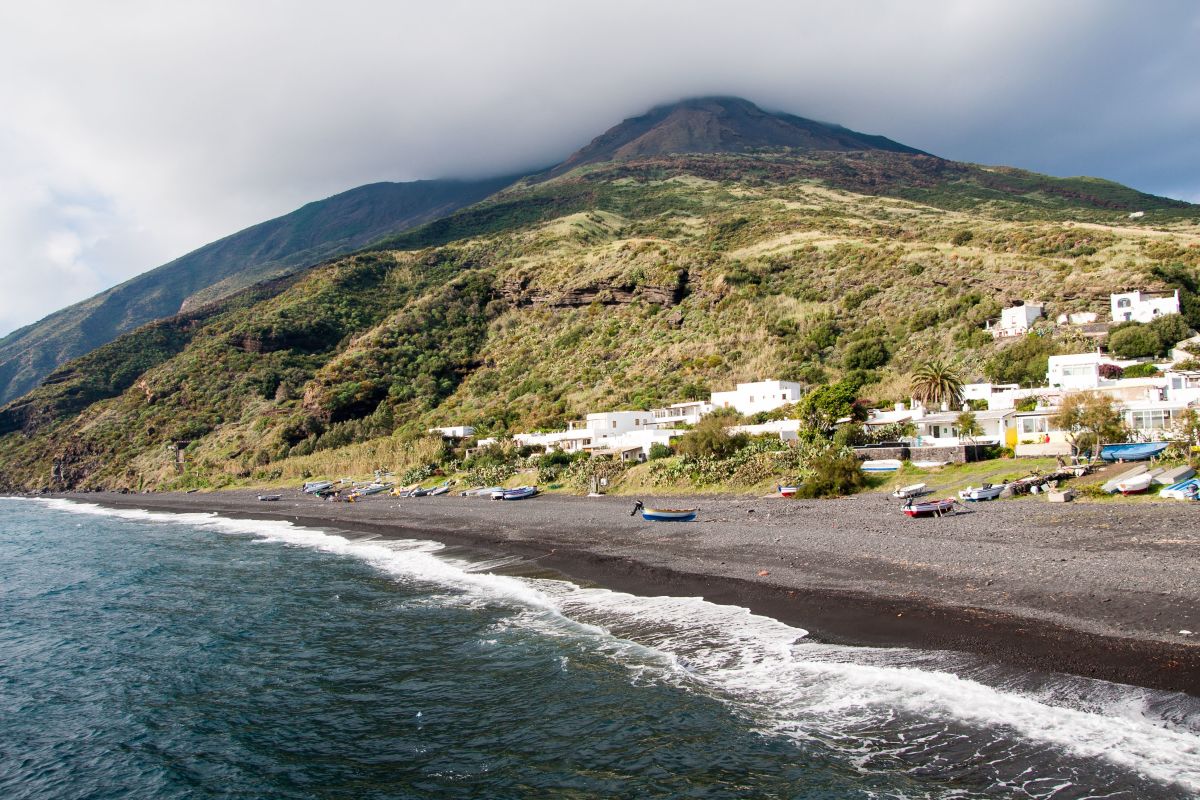 Miho Beach: Shimizu, Japan
The views of Mount Fuji from this pine tree-lined, rocky black beach are one-of-a-kind. The Miho-no-Matsubara pine grove is home to thousands of pine trees and was named as part of Mount Fuji’s UNESCO World Heritage Site in 2013. The Miho Peninsula is popular in summer months for kayaking, windsurfing, diving and fishing. Its spectacular scenery was also the inspiration for Japan’s traditional woodblock prints by famed artist Utagawa Hiroshige. (Getty Images) 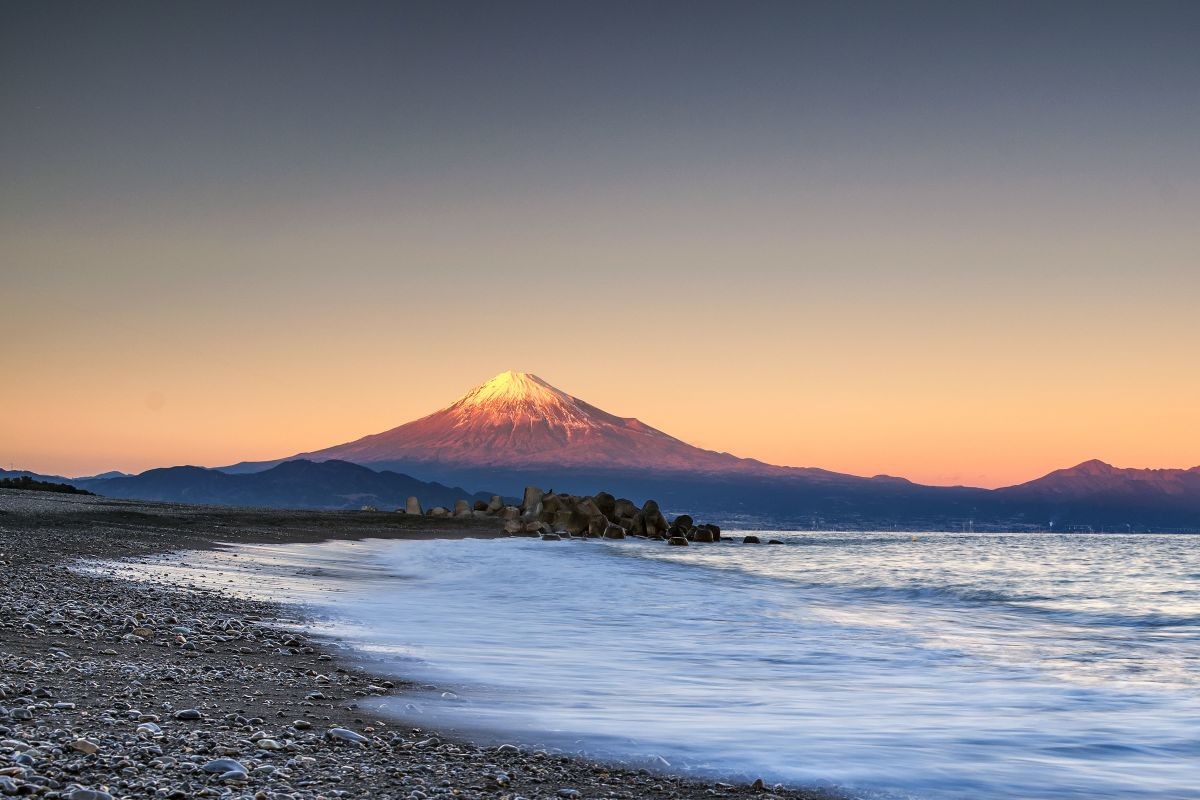 Papenoo Beach: Papenoo, Tahiti, French Polynesia
Popular with surfers, this remote black beach on Tahiti’s northern coast boasts some of the best waves in the world. It’s best to visit during the week when the shoreline isn’t as crowded, and you can spend your weekend hiking through the adjacent Papenoo Valley. Here you’ll discover more breathtaking natural beauty of the island, with its lush green mountains and valleys. Not-to-be-missed sights include the spectacular waterfalls: Topatari, Puraha and Vaiharuru falls. (Courtesy of Kim Lawson) 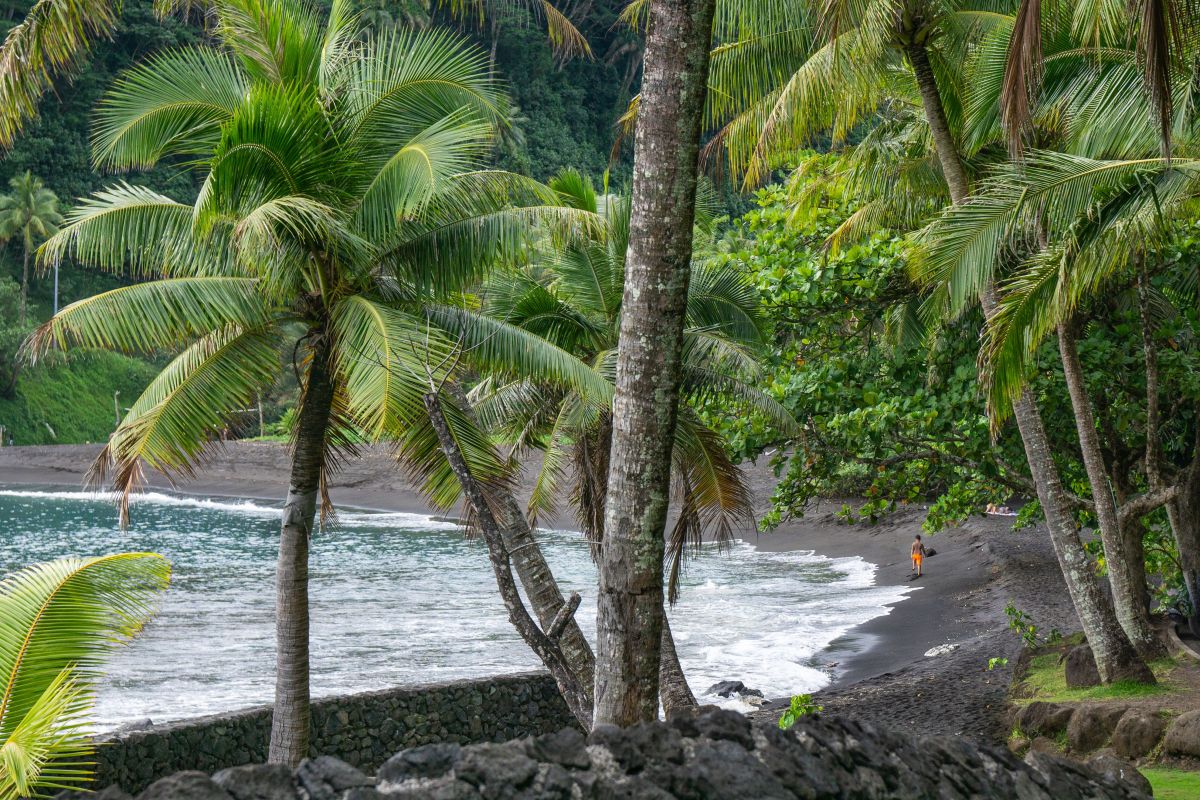 Reynisfjara: Vík í Mýrdal, Iceland
Located next to the quaint fishing village of Vík í Mýrdal on the southern coast of Iceland, Reynisfjara is one of the country’s most stunning black beaches. Take in the panoramic views as the mighty waves of the Atlantic crash on the shore and against the basalt rock formations rising from the sea. Known as Reynisdrangar, these jagged rocks have the towering cliffs of Mount Reynisfjall as their backdrop. This dramatic landscape may be familiar to “Game of Thrones” fans as Eastwatch-by-the-Sea in season seven. (Getty Images) 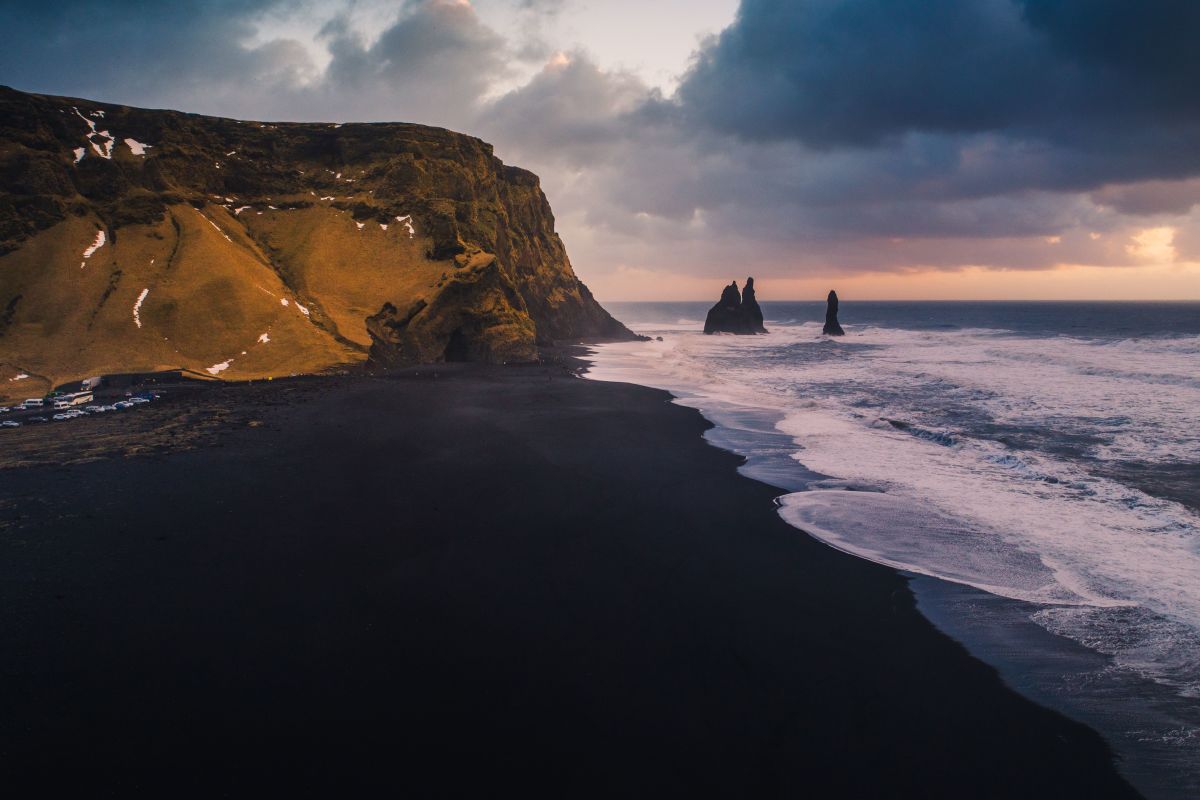 El Médano Beach: Canary Islands, Spain
El Médano Beach, located in the family-friendly resort town of El Médano, sits on the southeast coast of the island of Tenerife. Travelers can take in panoramic views of the island’s protected area of Montaña Roja, or red volcano, from the beach. Influenced by its Spanish origins, this Canary Islands vacation destination is also home to numerous tapas restaurants and nightlife options. The strong winds make this area a hot spot for kite surfers and windsurfers as well. (Getty Images) 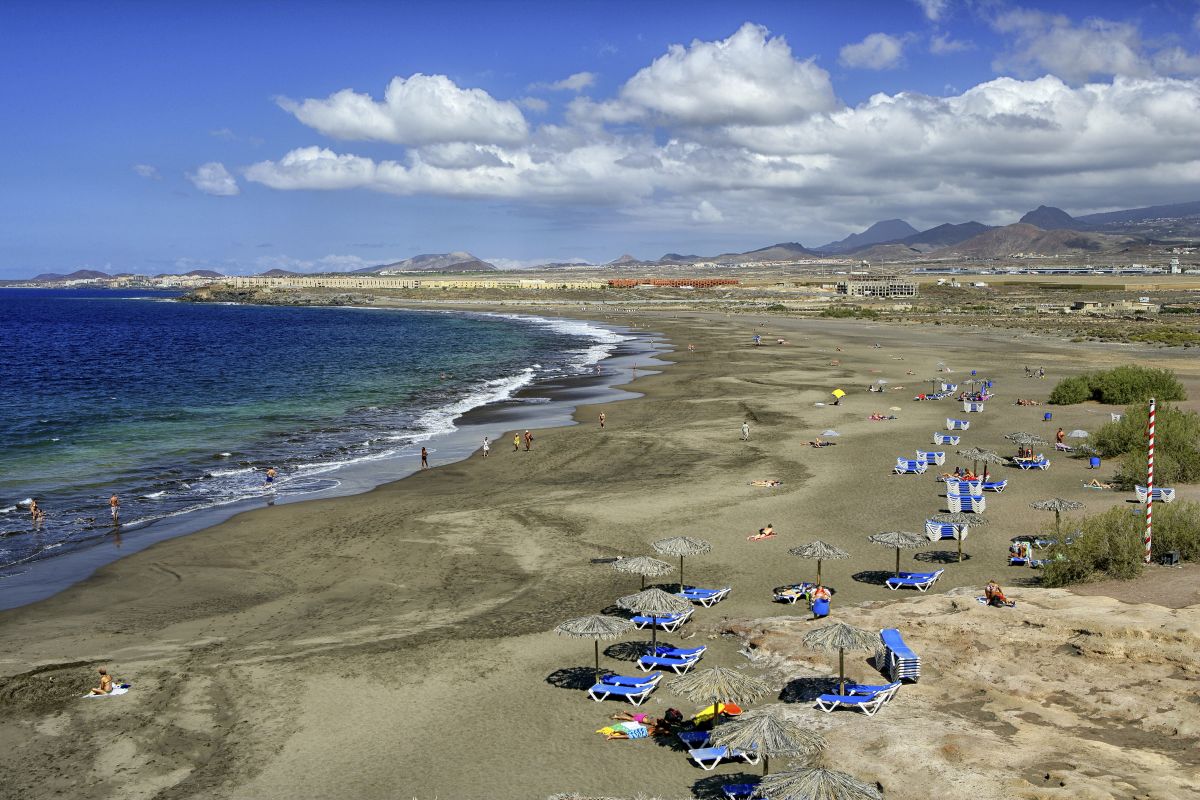 Black Sand Basin: Yellowstone National Park, Wyoming
Not all beaches are oceanfront. Black Sand Basin, located in the Upper Geyser Basin, is just a mile from the Old Faithful Visitor Center in Yellowstone National Park. This rare black sand forms when lava cools very quickly. Take a stroll down the 0.4-mile boardwalk to see the otherworldly thermal springs at Emerald, Opalescent and Rainbow Pools, then catch an eruption at Cliff Geyser. This active crater erupts as high as 30 feet every few minutes. (Getty Images) 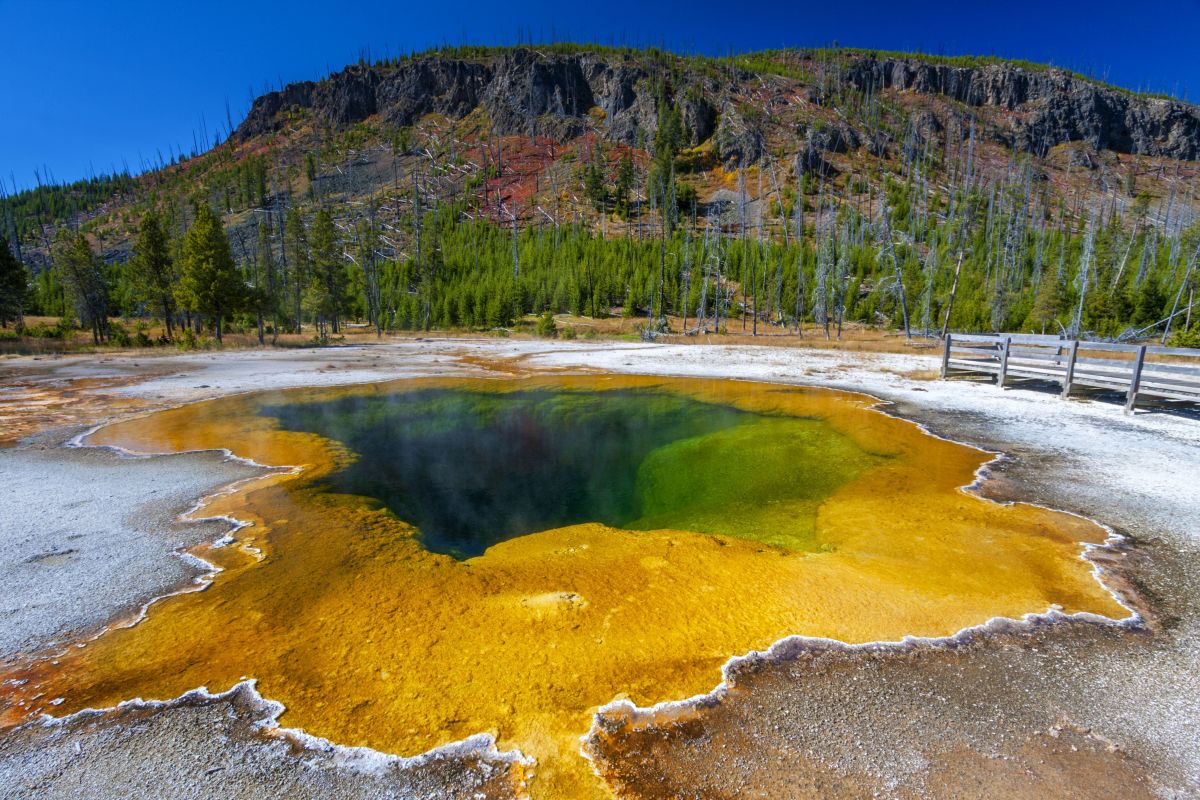 Waianapanapa Beach: Hana, Maui, Hawaii
Located in Waianapanapa State Park, this magical beach sits along a private cove surrounded by Hana’s rocky coastline. The deep ink-colored sands of the beach are a stark contrast to the brilliantly turquoise waters of the Pacific Ocean. The beach and other volcanic formations along the coast were created by waves crashing over hot lava flowing from the volcano Haleakala. Don’t miss the giant sea stacks rising from the ocean and nature’s blow holes where the force of the sea splashes everything in its path. (Getty Images) 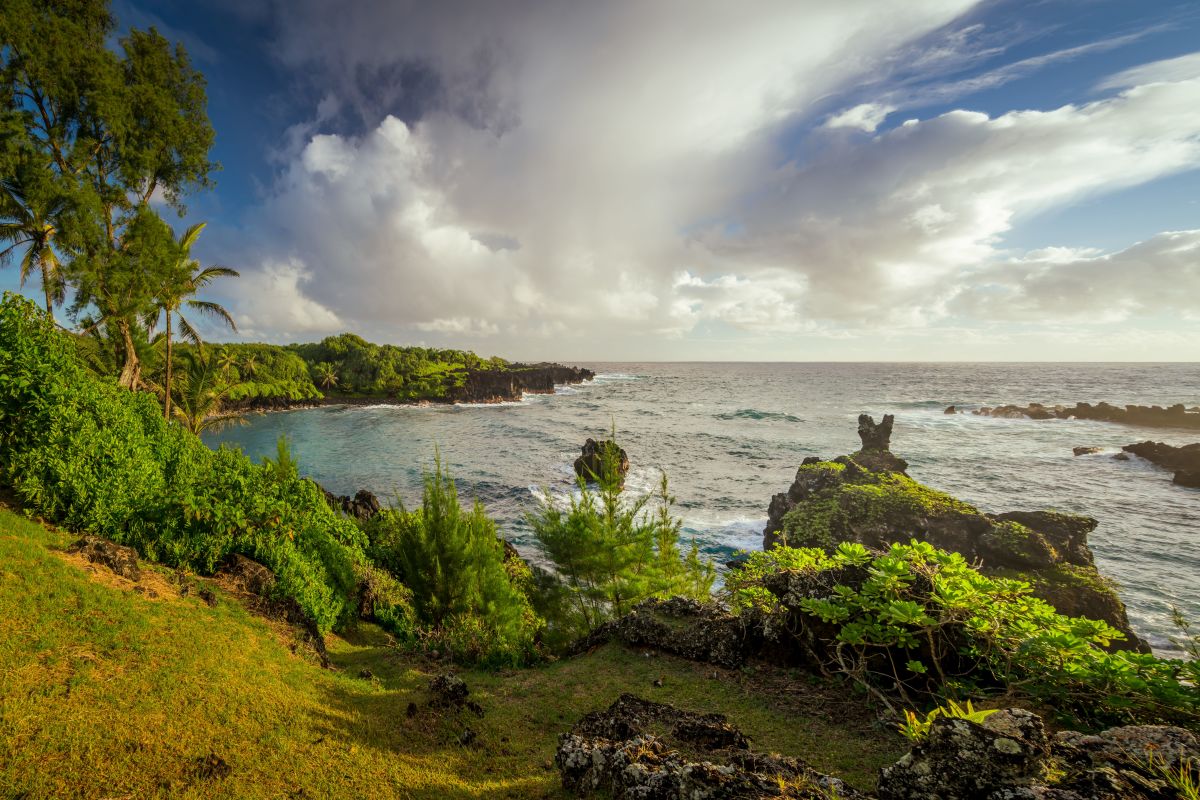 Baixa d’Areia: Caloura, São Miguel, The Azores
Baixa d’Areia is a secluded beach nestled in a ravine near the quaint fishing village of Caloura. Located on the southern coast of the volcanic island of São Miguel, this intimate beach is a local favorite. Plan a getaway here to experience unspoiled natural beauty, which is particularly picturesque thanks to its surrounding verdant vegetation, nearby vineyard and black basalt walls. For an extended stay, book accommodations at the Caloura Hotel Resort and visit Populo, another local black sand beach. (Getty Images) 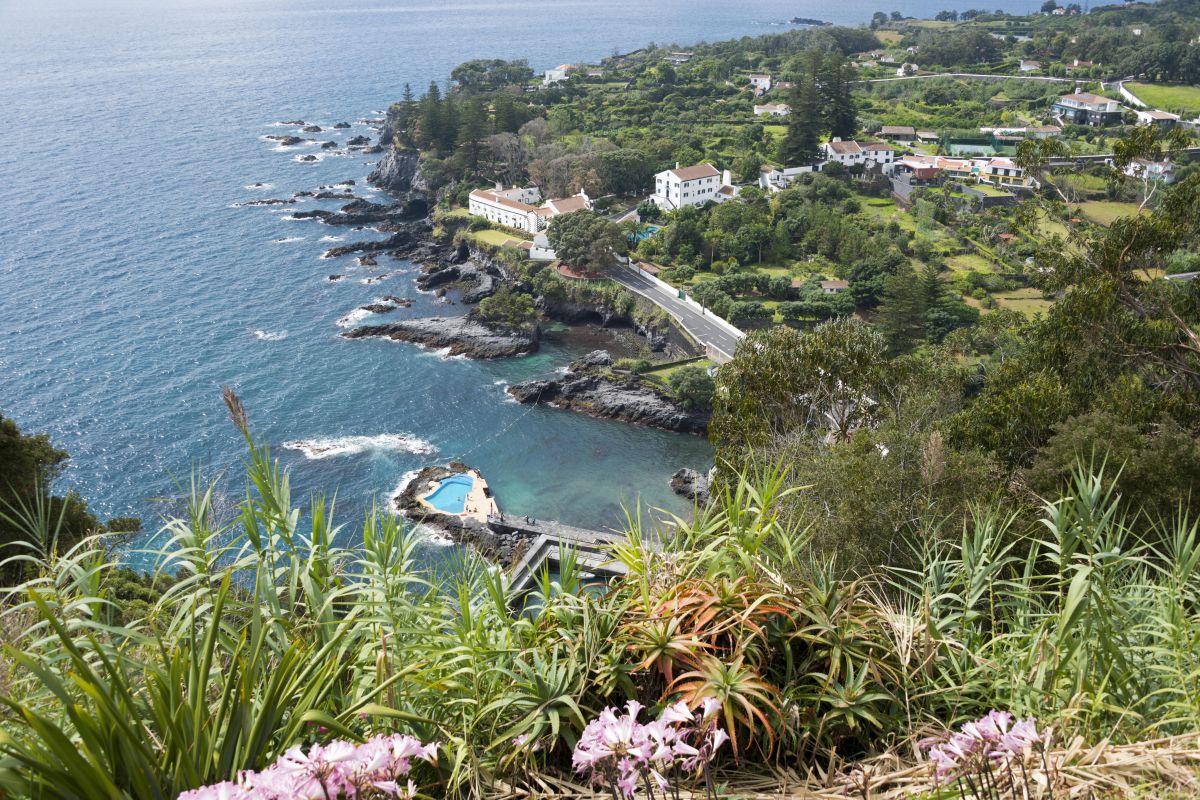 Monterrico Beach: Monterrico, Guatemala
The small village of Monterrico is located along the Pacific coast of Guatemala. It’s part of the Biotopo Monterrico-Hawaii, a nature reserve stretching across a 13-mile section of beach and includes the adjacent mangroves. This once under-the-radar town has become a popular ecotourism destination for its efforts in sea turtle conservation. After exploring the shoreline, enjoy the laid-back vibe at beachfront restaurants and consider a stay in a thatched hut roof bungalow at Johnny’s Place Hotel. (Getty Images) 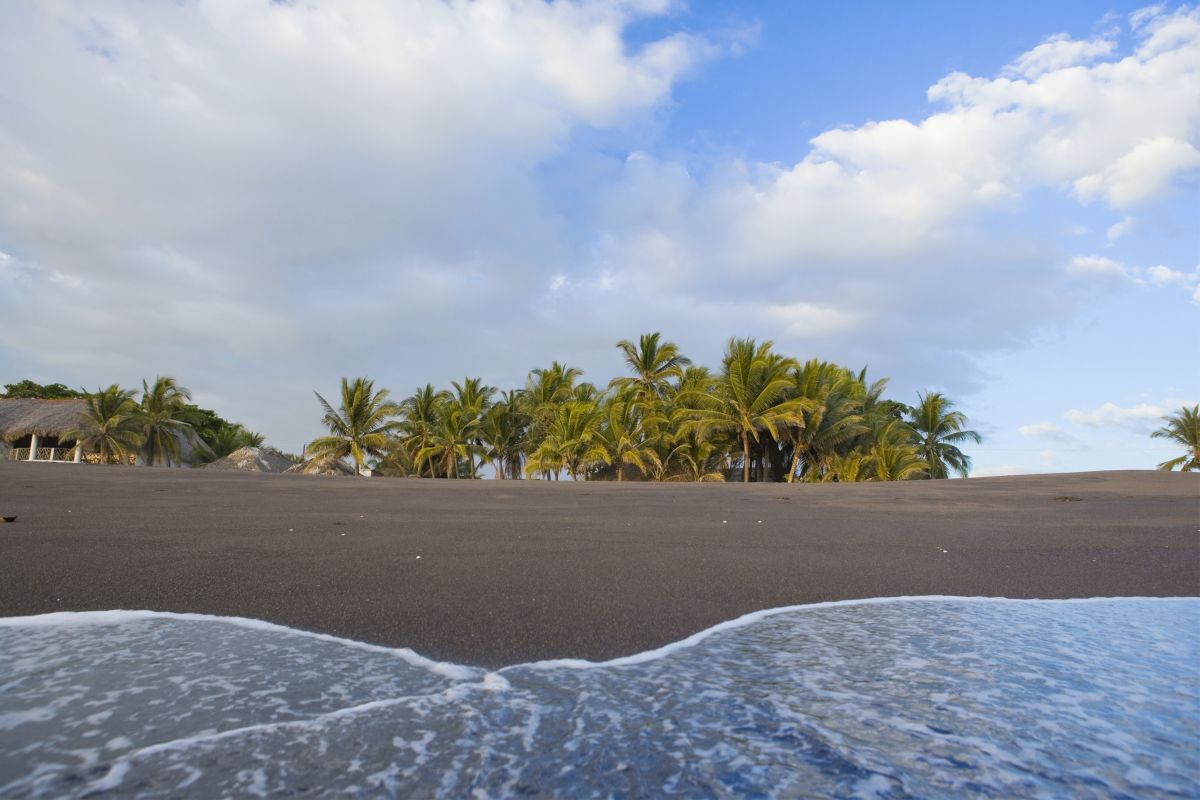 Playa Pavones: Pavones, Costa Rica
Playa Pavones, located in the Puntarenas region, is the home of the largest prehistoric rainforest along the Central American Pacific coast. The waves here – some of the longest in the world – have put this small town on the radar as one of the finest surfing destinations in Central America. Whether you’re a surfer or just looking for a tropical paradise getaway, plan to stay at La Ponderosa Beach and Jungle Resort, which provides easy beach access. At the end of the day, take in a colorful sunset as you listen to waves crash along the shoreline. (Getty Images) 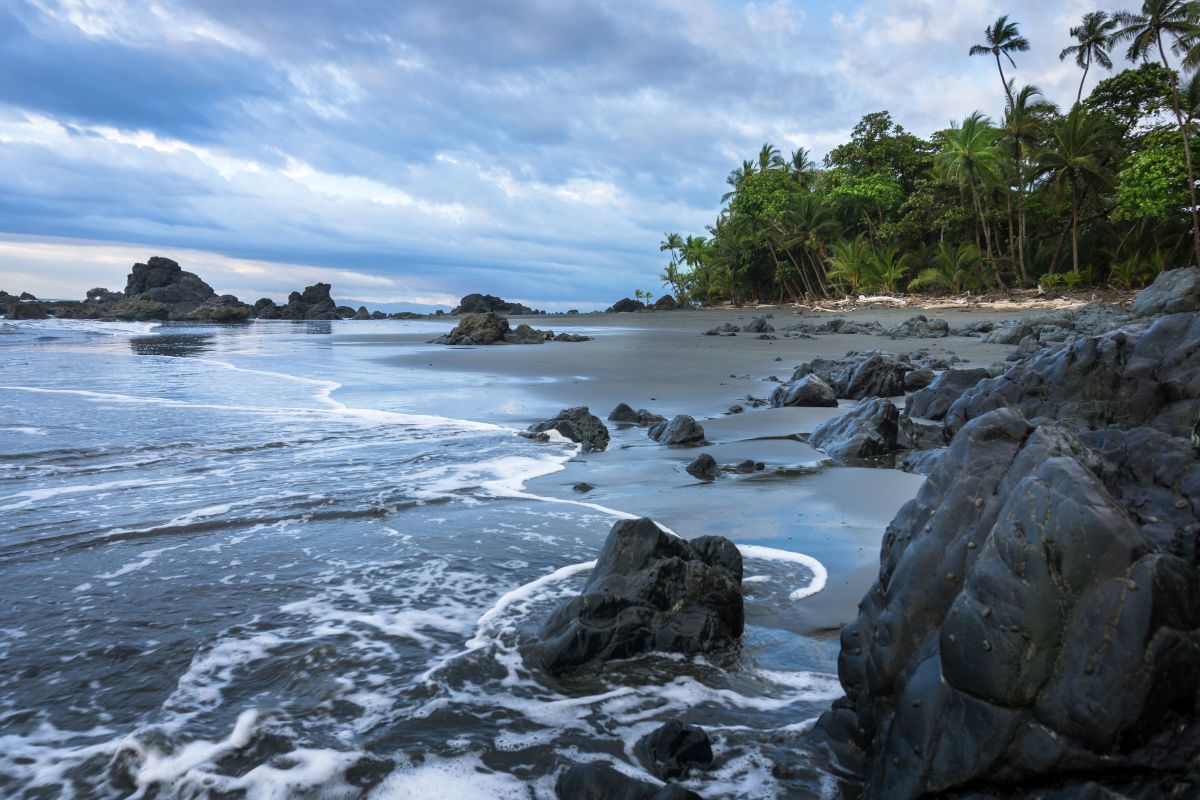 Karekare Beach: Karekare, New Zealand
Karekare Beach is located in Waitakere Ranges Regional Park, a wilderness area on the northwest coast of New Zealand, about 20 miles southwest of Auckland. This remote beach known for its powerful surf and strong riptides is also one of the most dangerous in the country. The dramatic panoramic setting with steep cliffs rising from the beach made it a striking locale for filming the 1993 Oscar-winning movie “The Piano.” It’s worth the drive from Auckland to take a stroll on this eerily beautiful beach. (Courtesy of Scott Venning) 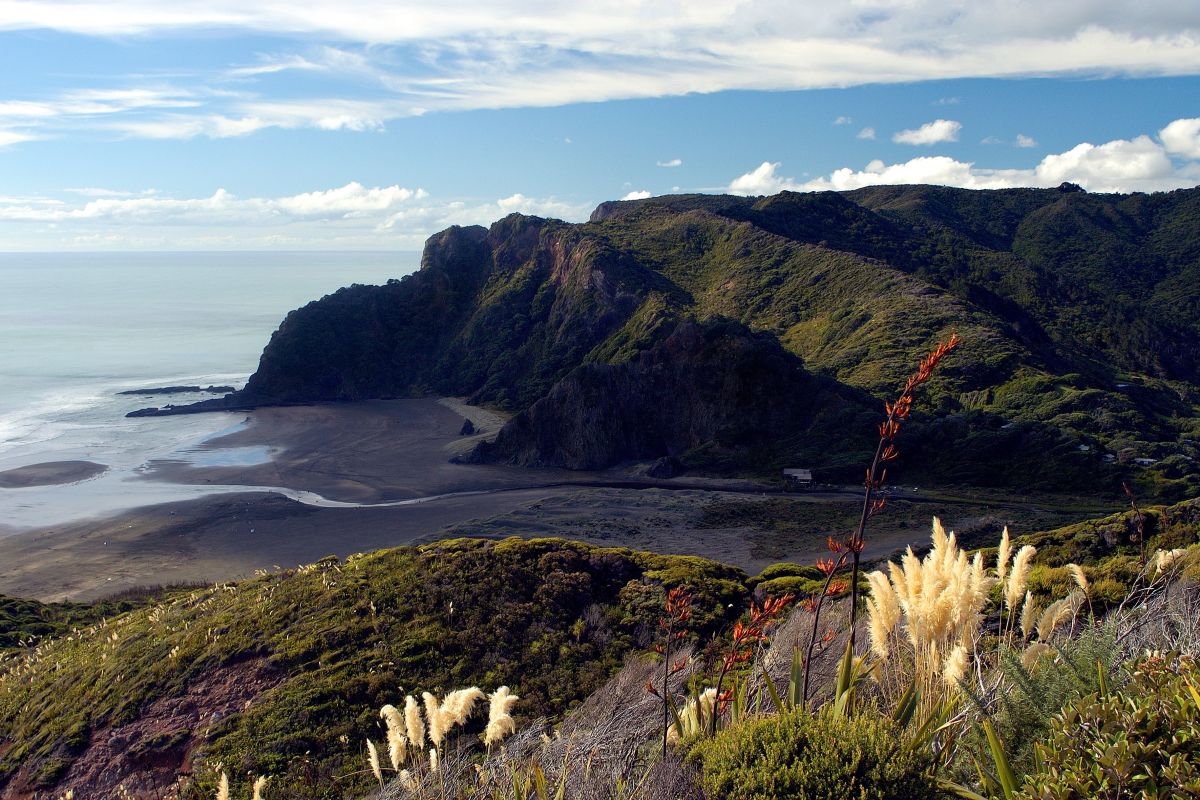 Black Sand Beach: Prince William Sound, Alaska
For unforgettable views of Alaska’s spectacular scenery and wildlife, book the 26 Glacier Cruise with Phillips Cruises & Tours from Whittier, Alaska. Highlights you’ll see along the way include Black Sand Beach, Surprise Glacier and Barry Arm located in Harriman Fjord. Watch and listen as pieces of ice calve into the sea from the uncannily brilliant blue glaciers. More adventurous travelers can see this beach by flying in on a bush plane. Or, travelers can take a kayak tour and paddle through the icebergs to the beach, where visitors can camp overnight, explore and hike the glaciers. (Getty Images) 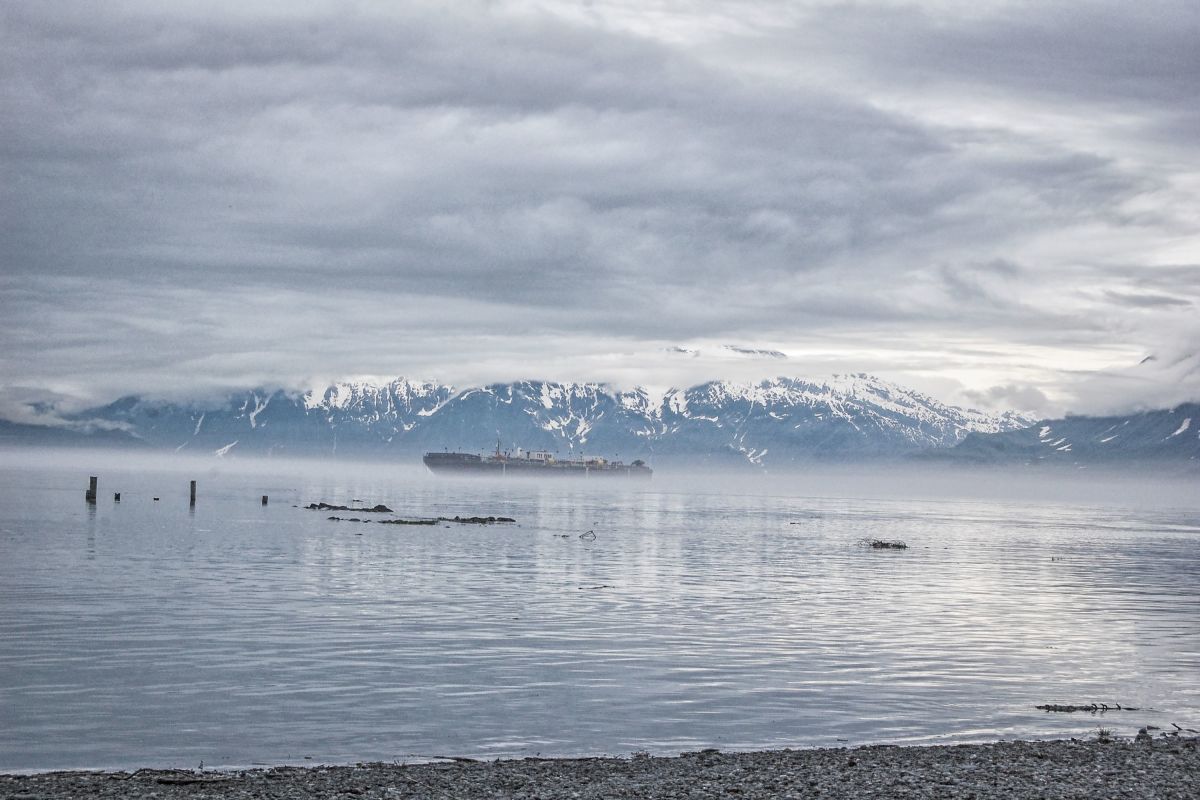 Kamari Beach: Santorini, Greece
Located on the southern end of the island, the resort area of Kamari is about 6 miles southeast of Fira, the capital of Santorini. This picturesque black sand beach is adjacent to Perissa, another popular resort town with charcoal-hued sand. A massive rock, Mesa Vouno, sits between the two beaches. Kamari becomes a busy tourist destination during the summer high season due to its amenities and water sports offerings, so you may want to visit in the shoulder seasons of spring or fall. If you’re looking to splurge, stay at Cavo Bianco Resort, a luxury property with numerous amenities just minutes away from Kamari Beach and the glistening waters of the Aegean Sea. (Getty Images) 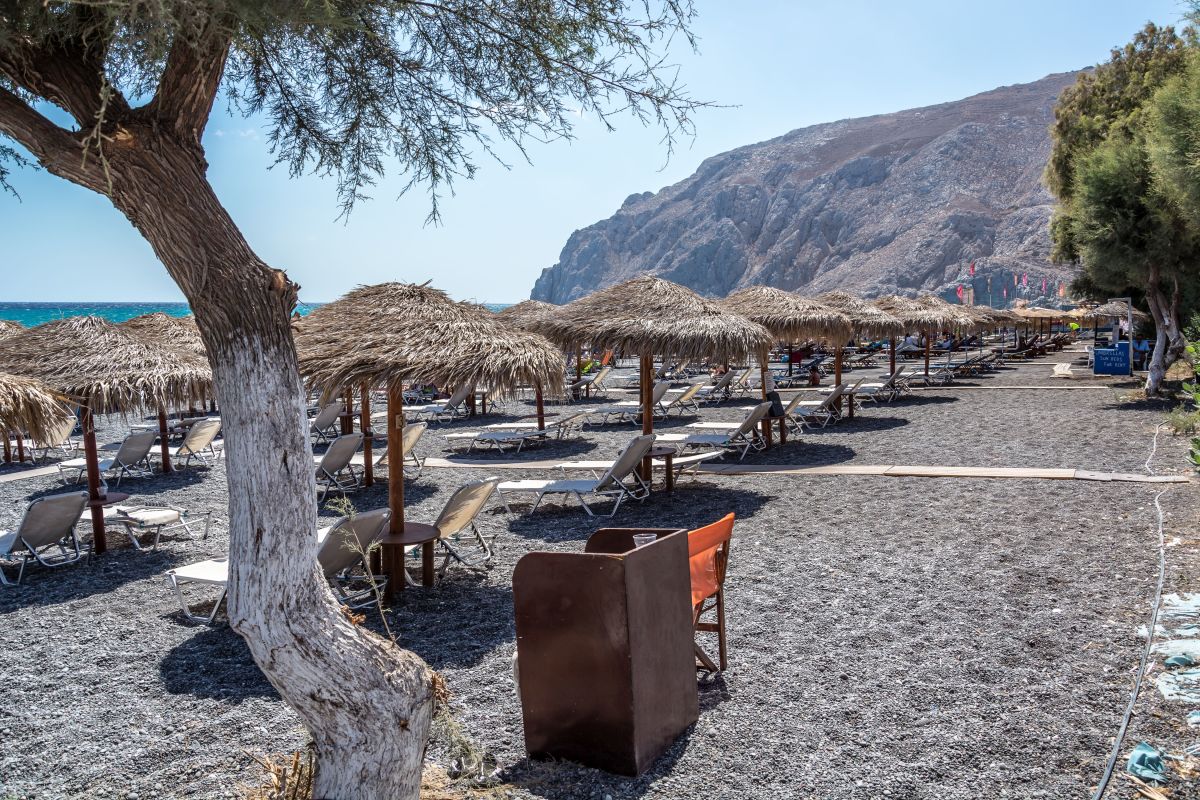 Saint-Pierre Beach: Saint-Pierre, Martinique
Located in the town of Saint-Pierre, this lively resort destination has quite a history. Once the capital of Martinique, the town was destroyed in 1902 when Mount Pelée erupted and killed thousands of residents. Only one person survived. You can still find remnants of the old city, including the ruins of the 18th-century, 800-seat theater that once hosted to theater troupes and musical groups from France. Today, most travelers come to admire the beautiful volcanic sand beach, which overlooks the bay with Mount Pelée in the background. (Getty Images) 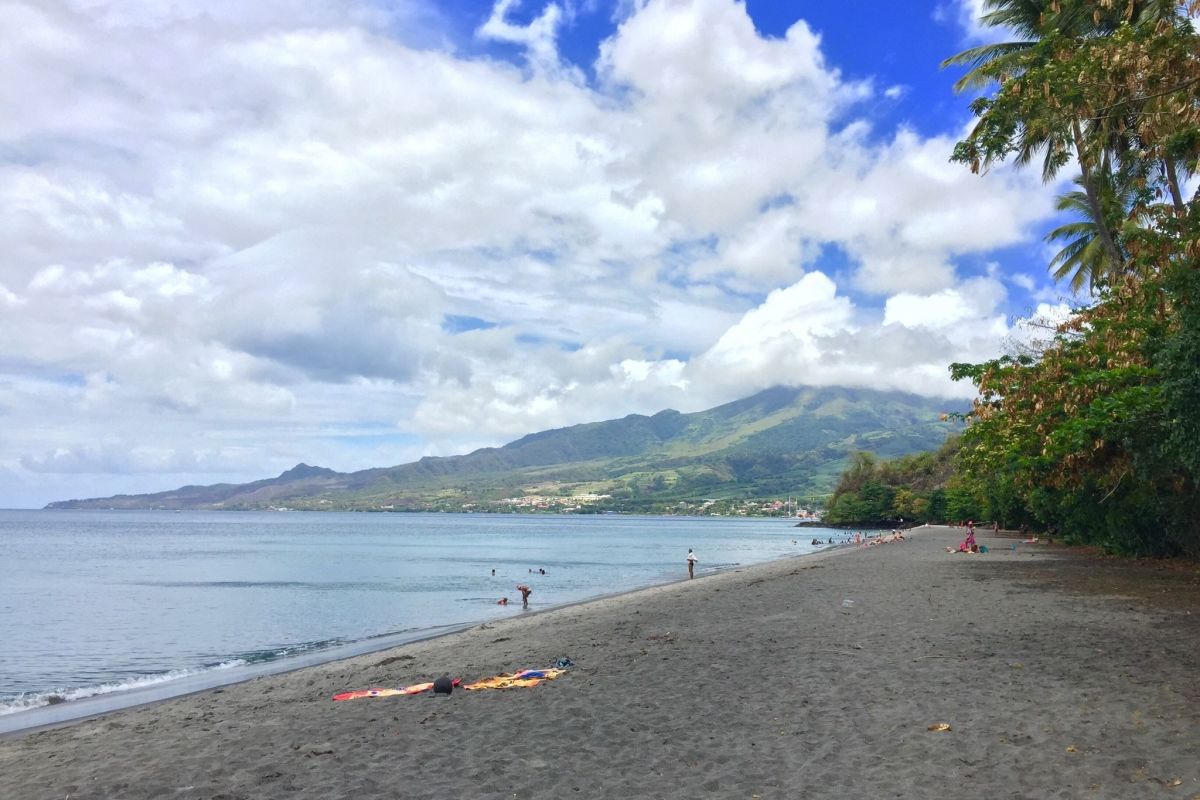