These incredible waterfalls are guaranteed to add an exciting element of wellness to your next adventure.

Water does more to sustain life than just quench your thirst, according to the 2019 Global Wellness Trends Report. “Spending time in natural environments like waterfalls has a unique impact on mood and happiness,” says Beth McGroarty, vice president of research at the Global Wellness Institute. “The crash of water from waterfalls or pounding surf creates an environment very rich in negative ions,” she continues, “which is linked to reduced depression and anxiety.” So, if you want to enjoy a refreshing change of pace and combat nature-deficit disorder while on vacation, consider visiting one or more of these breathtaking waterfalls. 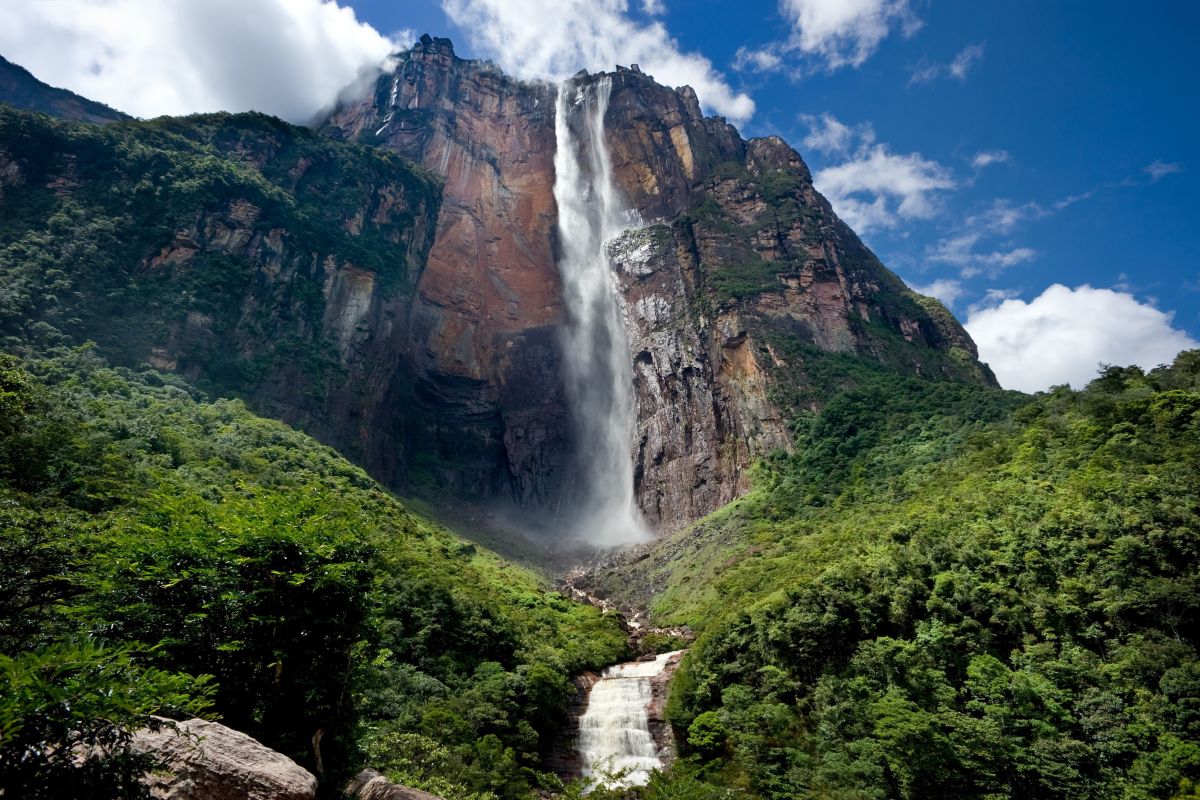 Although the current U.S. Department of State travel advisory for Venezuela warns of violent crime due to political instability, nature lovers should add the world’s tallest waterfall, Angel Falls (or Salto Ángel in Spanish), to their bucket lists. The cataract can be found in an area of eastern Venezuela known as the Lost World (Mundo Perdido). Fed by a tributary of the Rio Caroni in the equatorial rainforest, this UNESCO World Heritage Site emerges from the cloud forest above Auyantepui, a flat-topped mountain about 15 times higher than Niagara Falls. To get to the 3,230-foot-tall waterfall, travelers must hop on a tour boat then hike for an hour to its majestic drop, where water falls uninterrupted for an extraordinary 2,647 feet. 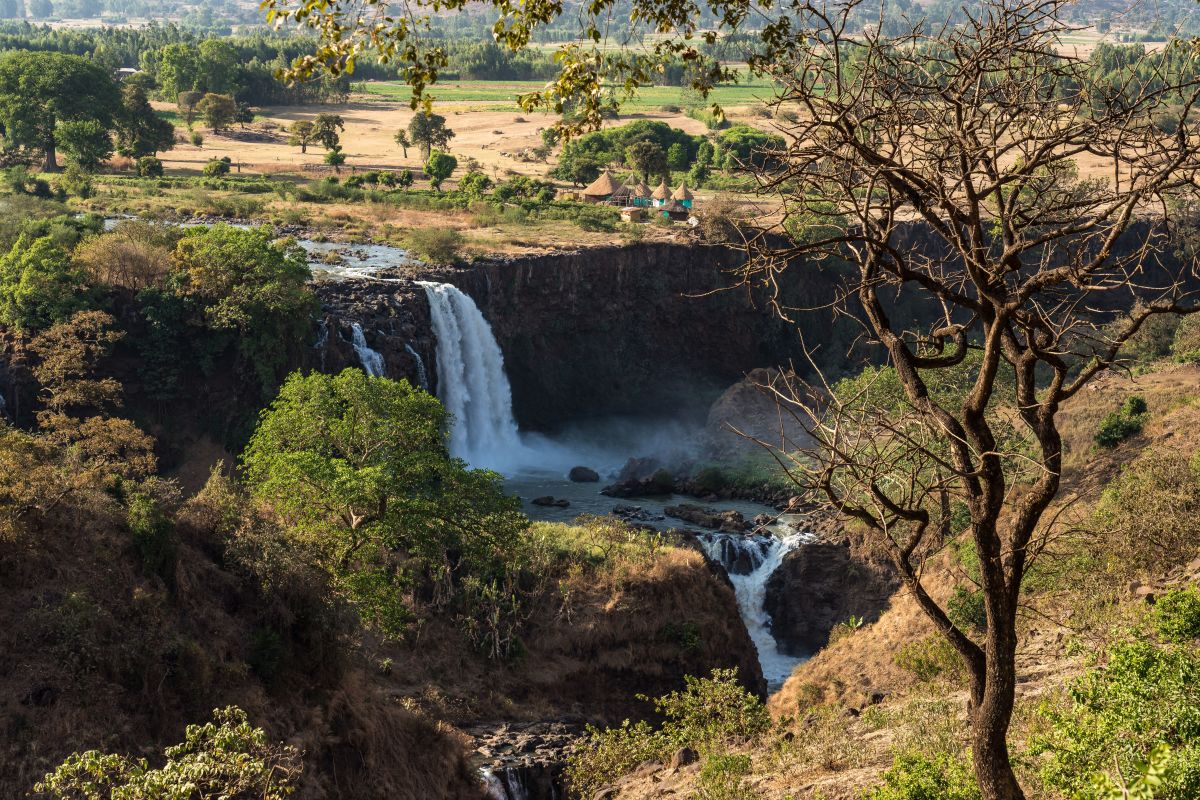 When this 1,300-foot-wide torrent of water gushes 147 feet down through jungle overgrowth, it’s easy to understand how the Blue Nile Falls (or Tis Issat, which is Amharic for “Smoke Water”) got its name. The Blue Nile powers this waterfall on Lake Tana in northern Ethiopia. Since most of the water is diverted to the Beles Hydroelectric Power Plant on weekdays, Sunday (when the Blue Nile Falls resumes its natural flow) is the best day to visit. The water level is typically at its peak in September after the rainy season. 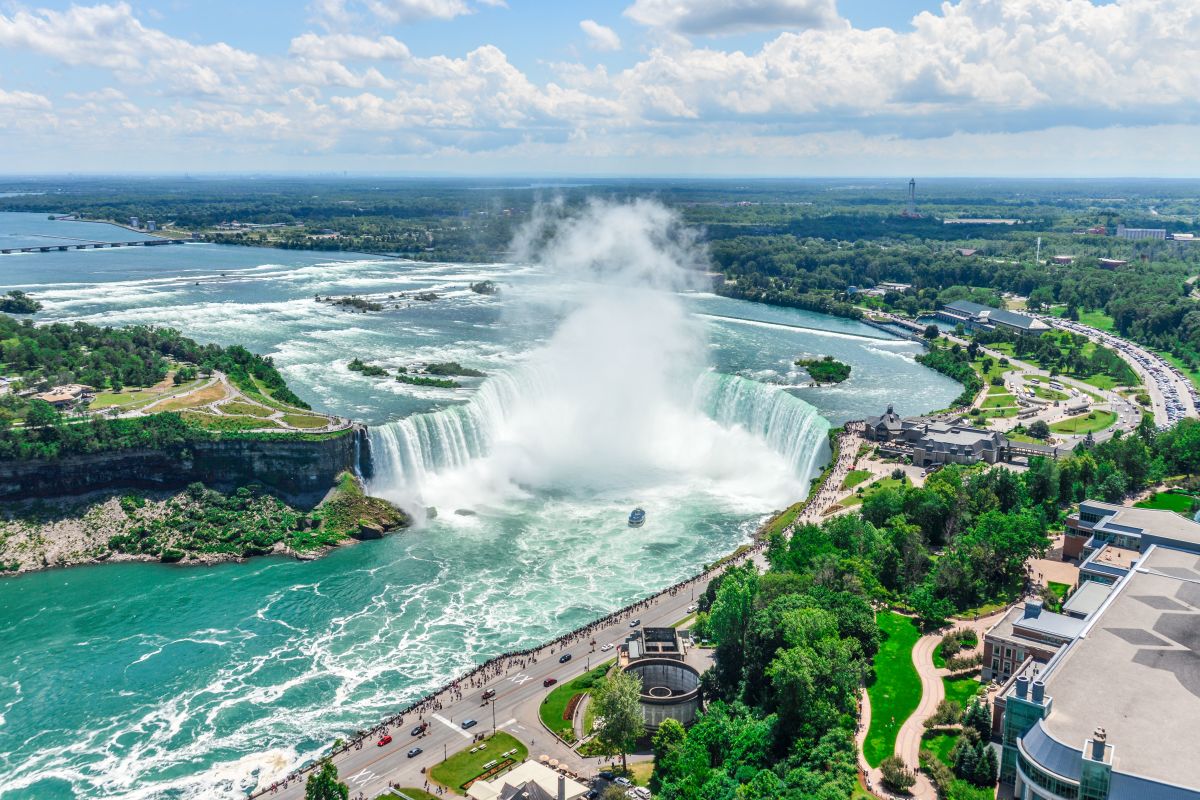 One of the world’s most recognizable waterfalls is Niagara Falls. Located on the U.S.-Canada border, Niagara’s three cataracts dump an average of 600,000 gallons of water per second. To appreciate its size, head to the Canadian side and splurge on a helicopter tour or join a sightseeing cruise so you can feel the rumble of Ontario’s immense Horseshoe Falls. Then, visit the New York side to check out the towering American Falls and the misty Bridal Veil Falls from the cliffside Cave of the Winds. New York State Park’s Niagara Falls USA Discovery Pass covers several attractions and activities in its $35 to $46 per person fee, including a Maid of the Mist boat ride. 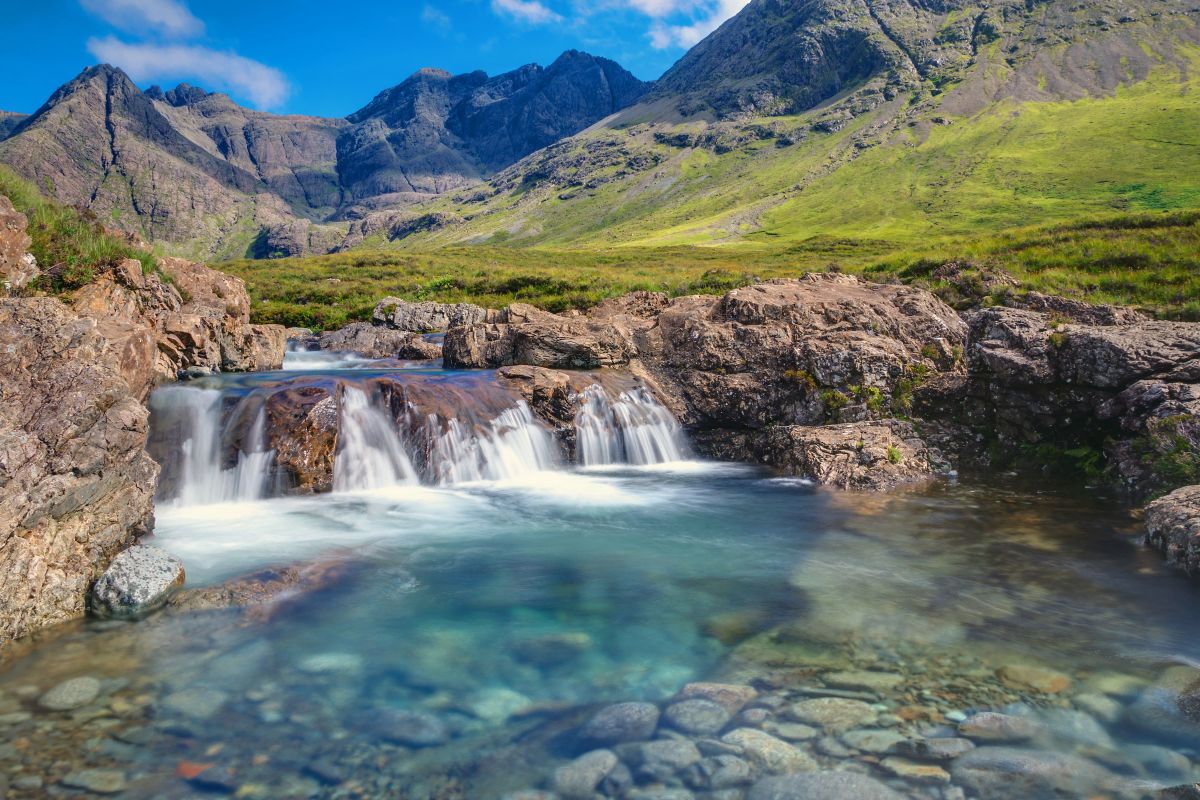 Known for their magical Isle of Skye setting in the Scottish Highlands, the Fairy Pools are a series of stone-walled repositories that hold the cold, crystal-clear water that rushes down from the Cuillin mountains and River Brittle. Framed by Scotland’s mountains and forest, the pools offer Instagram-worthy vistas. Plus, visitors can hike, picnic and swim here, though wetsuits are recommended for the latter. Pay to park in the designated lot near the village of Carbost in Glenbrittle, then hike about 1.5 miles down through heather fields. For an overnight stay or a bite to eat, visit Glenbrittle’s campground and cafe. 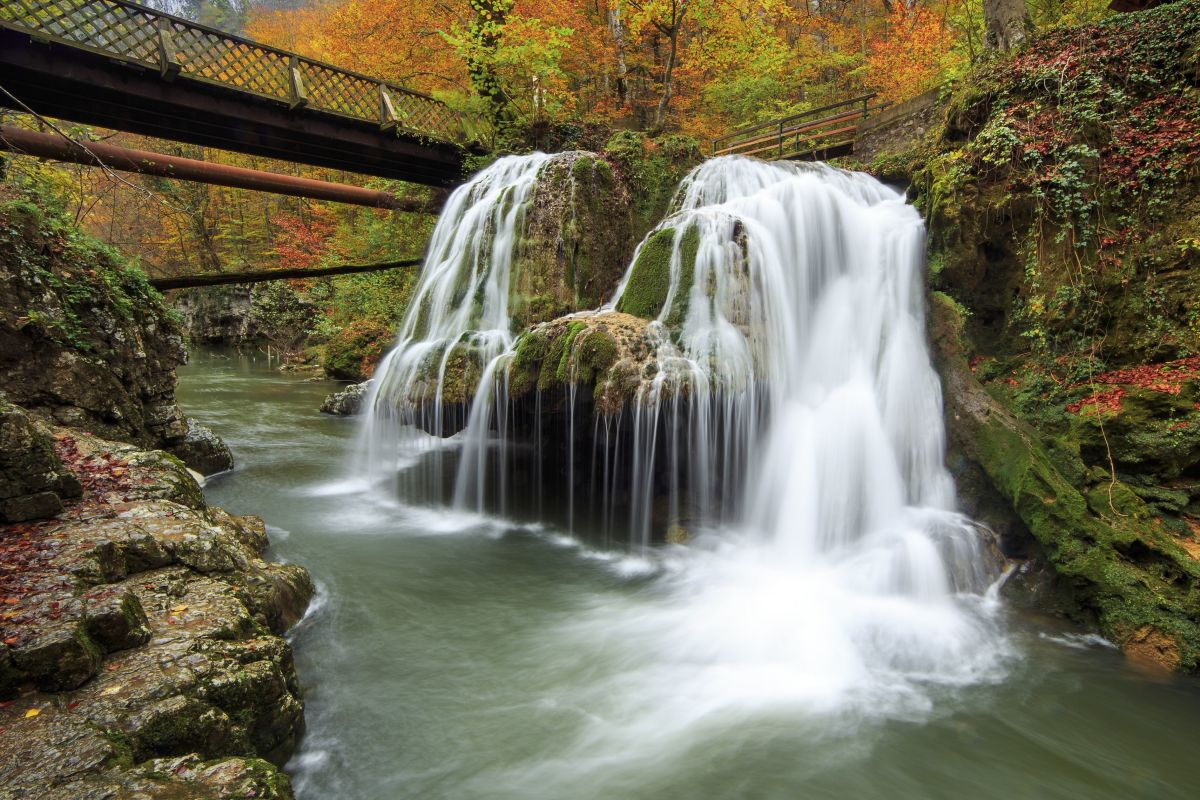 This veil-like waterfall is unique: Its spring-fed flow presents in sheer threads of water as it falls over a thick moss-covered rock wall into the Miniş River. Situated in western Romania on the road between Oravita and Bozovici, Bigar Waterfall is named for a young man who reportedly drowned to be close to his beloved, who could only be freed from captivity in a nearby cave by becoming a waterfall. Arrive early to photograph the beautiful scene before hikers exploring other parts of Cheile Nerei-Beusnita National Park arrive for the day. 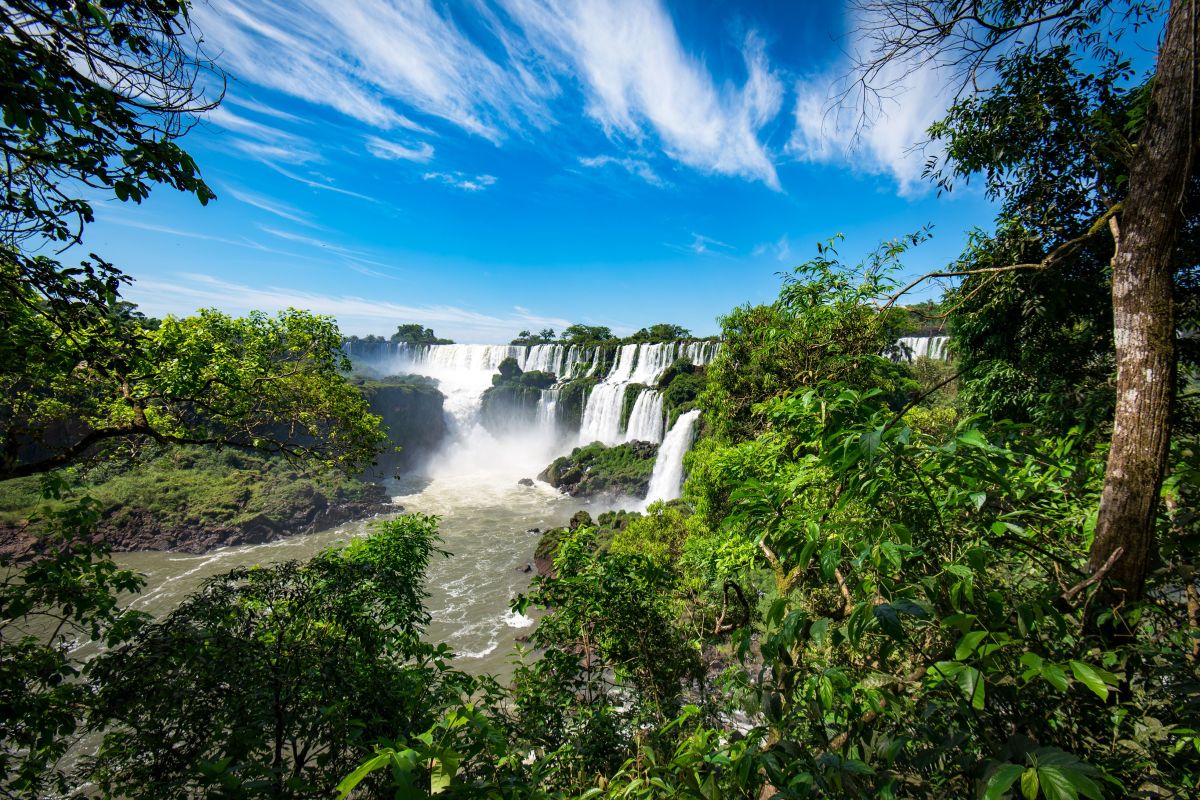 Forming the Argentina-Brazil border along the Iguazu River, this necklace of 275 cataracts is considered the largest waterfall system in the world. Iguazu Falls sits within a UNESCO World Heritage-listed park and plummets 260-plus feet into dense subtropical rainforest. The nearly 1.7-mile-wide waterfall chain is so powerful that the late Eleanor Roosevelt is said to have uttered “Poor Niagara” during her visit. The U-shaped Devil’s Throat area is considered one of the site’s most impressive sections. Superb vistas are also available from Brazil’s Belmond Hotel das Cataratas and Argentina’s Gran Meliá Iguazú.

Known in Croatian as Veliki Slap, the Big Waterfall flows among the stunning lakes and travertine rock formations of Plitvice Lakes. In fact, this national park inspired the look of Walt Disney World Resort’s mythical “Pandora – The World of Avatar” in Orlando, Florida. Standing an impressive 256 feet tall, the waterfall is fed by the Plitvica Potok river and can be found in the Lower Lakes section of the park. Three park entrances are available, but for easy access to the Big Waterfall from Plitvice Selo’s hotels, use Entrance III. Those in search of an otherworldly scene should visit in winter, when the waterfall often freezes into a remarkable ice sculpture. 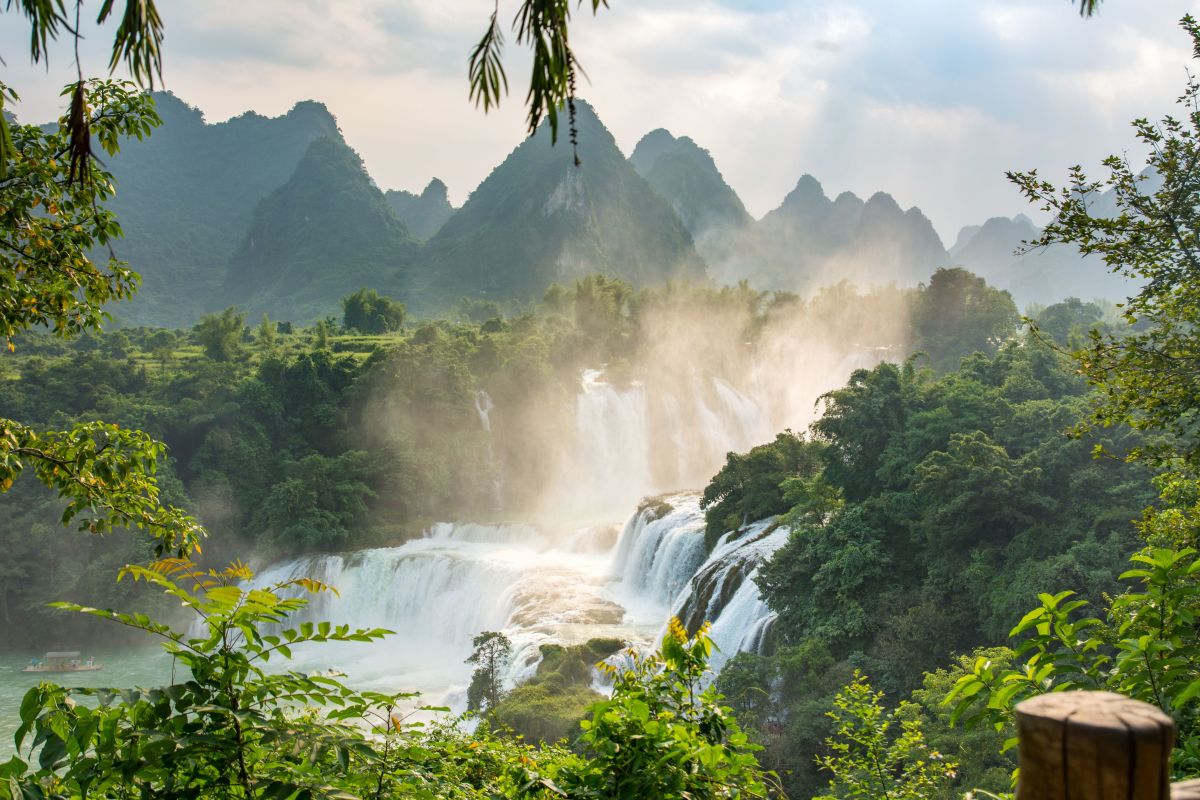 Two bordering waterfalls – Banyue Falls in Vietnam and Detian Falls in China – form one of Asia’s largest natural cascades. The three-level Ban Gioc-Detian Falls is best seen between May and September (the region’s rainy season), when abundant water flows from the Quy Xuan River over black rocks into verdant rice paddies. Take time to explore the Vietnam side’s Nguom Ngao cave system: It’s said that thieves long ago used the falls and their adjacent caves as a hideout and place to stash treasure. 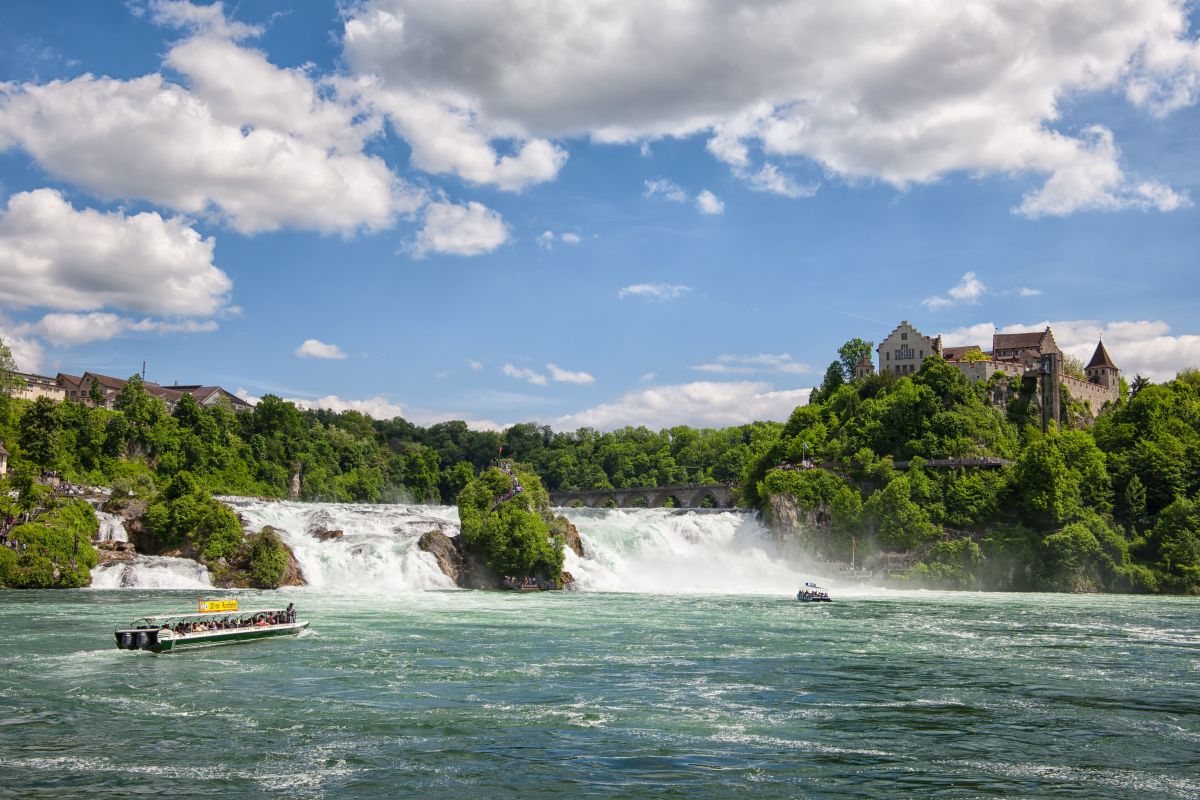 Cruise Switzerland’s section of the Rhine River to Europe’s largest waterfall. Created by tectonic shifts that changed the riverbed more than 15,000 years ago, the roughly 75-foot-tall, 500-foot-long waterfall drops thousands of gallons of water. Boat tours to the Rhine Falls Basin offer access to platforms beneath the falls, giving travelers an up-close (and very wet) view. River excursions also include visits to the nearby castles of Wörth and Laufen, the latter of which features an educational exhibit about the falls.

If you’re planning a visit to the Grand Canyon, tack on a stay on the Havasupai Indian Reservation to see the Havasu Falls. The strikingly photogenic waterfall plunges more than 100 feet over a red rock cliff, thundering into a turquoise swimming hole rimmed with a sand beach and cottonwood trees. Due to its popularity, the waterfall is only accessible to campers who reserve a space at the campground. All bookings are for three evenings and cost between $100 and $125 per person, per night. Getting to the falls requires embarking on a rigorous hike or horseback ride across the Havasupai Indian Reservation.