Located in the aptly named Dunn’s River Falls and Park, Dunn’s River Falls is a must for anyone visiting Jamaica. Said to be the site of the Battle of Las Chorreras in 1657, the waterfall has starred in the James Bond film “Dr. No” and countless commercials. The falls’ shallow lagoons and natural stairs – which travel 600 feet between the bottom and top of the waterfall – are a result of limestone erosion as Dunn’s River flows to the Caribbean Sea. Be sure to arrive early to enjoy the waterfall’s picturesque setting and ample amenities (including a restaurant and a swimming area) without hordes of fellow tourists. 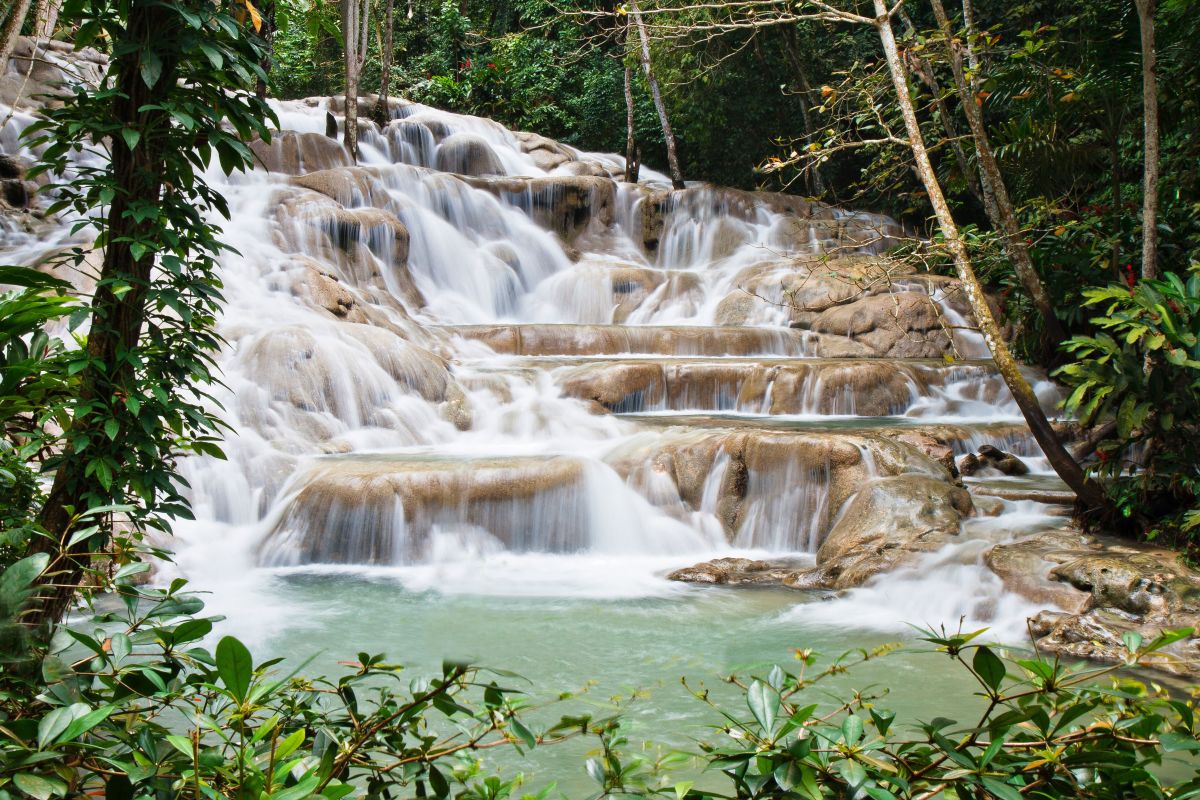 Iceland is known for striking waterfalls, and Dettifoss in Vatnajökull National Park does not disappoint. Measuring only 144 feet tall, this waterfall in northeastern Iceland impresses with its roughly 132,000 gallons of Jökulsá river water that falls from its 328-foot-wide shelf every second. The best time to view Europe’s most powerful waterfall is from May to December, when you can access gravel road 862 and a new paved road on the river’s west bank. On the other side of the river, you’ll find facilities like a parking lot and – some say – better views. Just remember that paths can be slippery and crowded during the busy summer season. 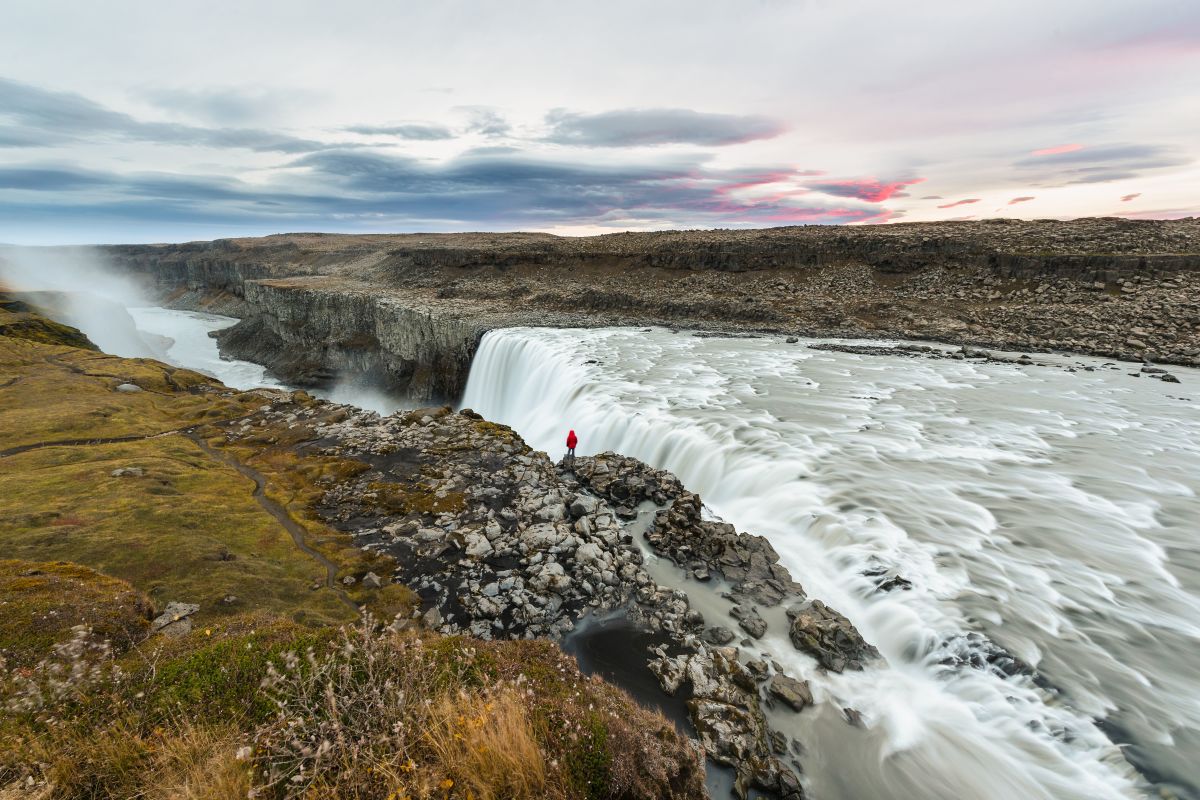 America’s tallest waterfall is Yosemite Falls in Yosemite National Park. At 2,425 feet tall, Yosemite Falls’ three cascades stand about 17 times taller than Iceland’s famous Dettifoss. Although Yosemite Valley (where the waterfall is located) is beautiful at any time of year, it’s fed by snow melt, meaning peak flow is typically from April through June. Hikers can choose to traverse a wheelchair-accessible, mile-long loop at the base or a challenging trail that travels to the top. Fortunately, the towering waterfall is easily seen from many vantage points and can be heard throughout the eastern part of the valley.

Tumbling from the Drakensberg Mountains of western South Africa, Tugela Falls – which sits about 260 miles southeast of Johannesburg – is the tallest waterfall in Africa at 3,110 feet. For the best views of the falls’ five connected cascades, gear up for the direct 7.5-mile hike into Royal Natal National Park. Or, opt for the three-day, less rigorous Amphitheatre Slackpacking Trail. Both offer vistas of water plumes leaping down Drakensberg’s huge rock wall. When planning your visit, keep in mind that the dramatic water flow is inconsistent and the uppermost cascade may freeze in June and July (South Africa’s coldest winter months). 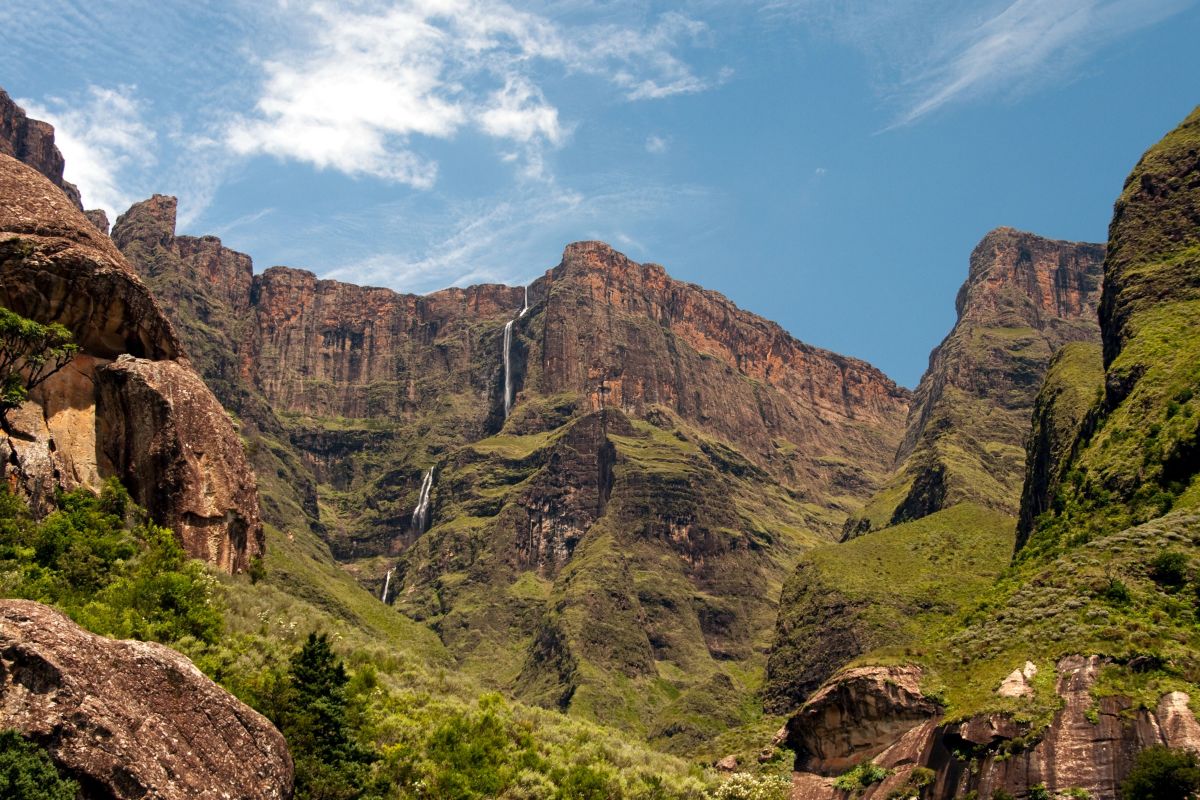 Hike the rugged Milford Track for three days – or simply book an aerial sightseeing tour – for a top-to-bottom view of Sutherland Falls, New Zealand’s most spectacular waterfall. The 1,903-foot-tall waterfall gushes from the glacial Lake Quill in three giant steps as it travels to the Arthur River. If you can’t get to this waterfall in the South Island’s UNESCO World Heritage-listed Fiordland National Park, book a day cruise in the park’s Milford Sound. This world-renowned natural wonder located roughly 180 miles northwest of Queenstown features dozens of smaller cataracts streaming down its gorgeous, steep-sided fjords.

Situated about 70 miles northwest of Shivamogga in Karnataka, Jog Falls’ four chutes (Raja, Rani, Roarer and Rocket) measure 829 feet tall, making them some of India’s tallest waterfalls. The waterfalls are fed by the Sharavathi River in the Western Ghats mountain range and are modulated by the Linganamakki Dam. Since the falls commonly recede to small rivulets during India’s dry season, they’re best seen from the end of monsoon season through early winter (between August and December). Make sure the dam’s sluice gates are closed before you venture out onto the rock steps to watch rainbows or bathe in Jog Falls’ mist. 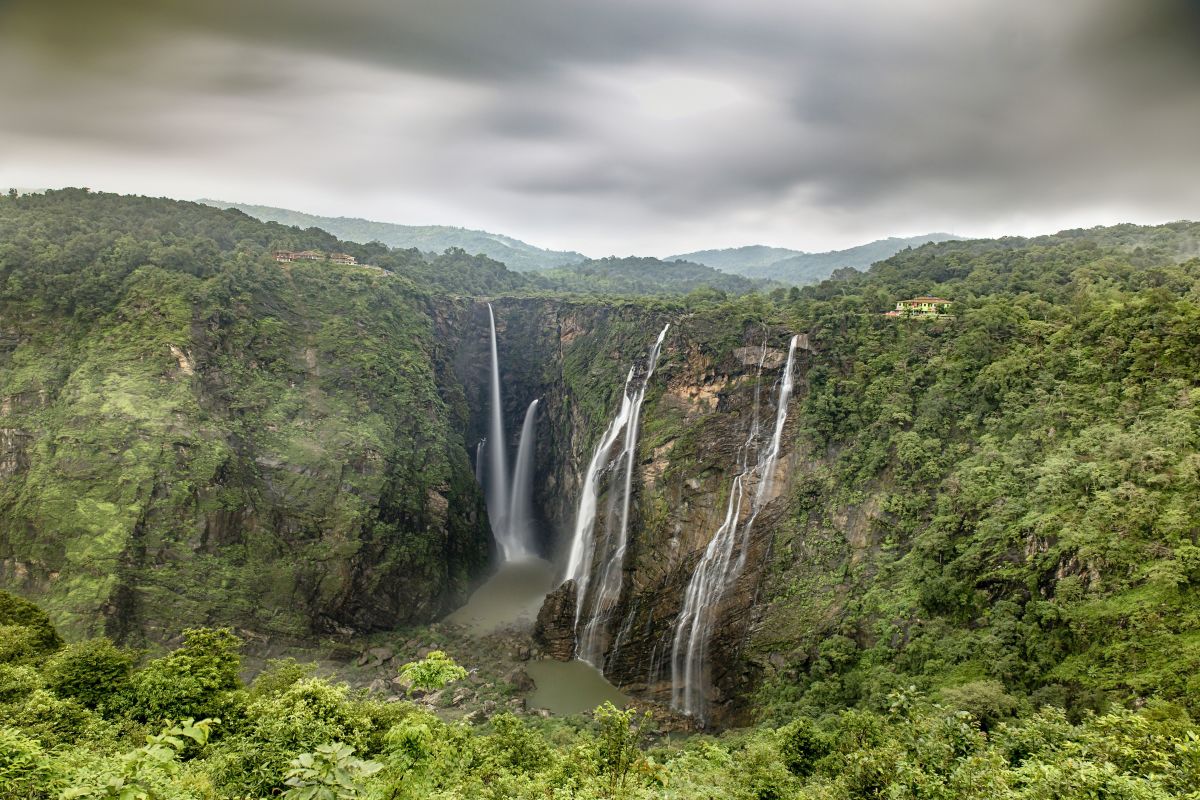 Gullfoss is easily seen as part of a Golden Circle daytrip from Reykjavik. Because it originates in Hvítárvatn (a lake next to the Langjökull ice cap that’s connected to Gullfoss via the Hvítá river), glacial sediment causes the waterfall to appear golden in sunlight and to display rainbows in the mist. Another unique aspect of the 105-foot-tall cataract is that its two tiers cascade at nearly right angles. From a distance, the upper cascade seems to disappear down into rocks, while the lower cascade plunges across the width of the Hvítá river. 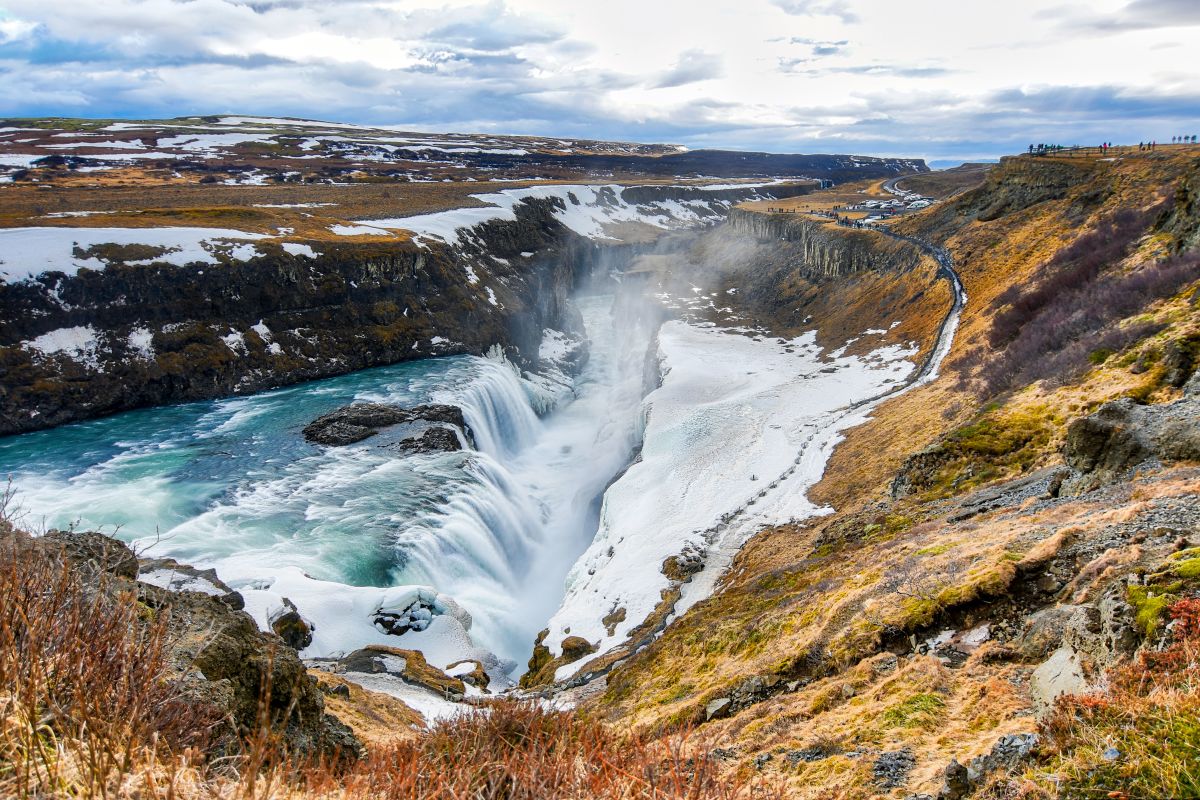 Isolated in Kaieteur National Park’s dense rainforest, Kaieteur Falls is the world’s largest single-drop waterfall by volume and is five times taller than Niagara Falls. The waterfall – which is located on the Potaro River in central Guyana – is said to be named for the Patamona Indian chief Kai, who sacrificed his life paddling over it to save his people. Kaieteur Falls measures a whopping 741 feet tall (at its largest plunge) and 370 feet wide. It is only accessible by a days-long hike or an aerial tour via propeller plane. 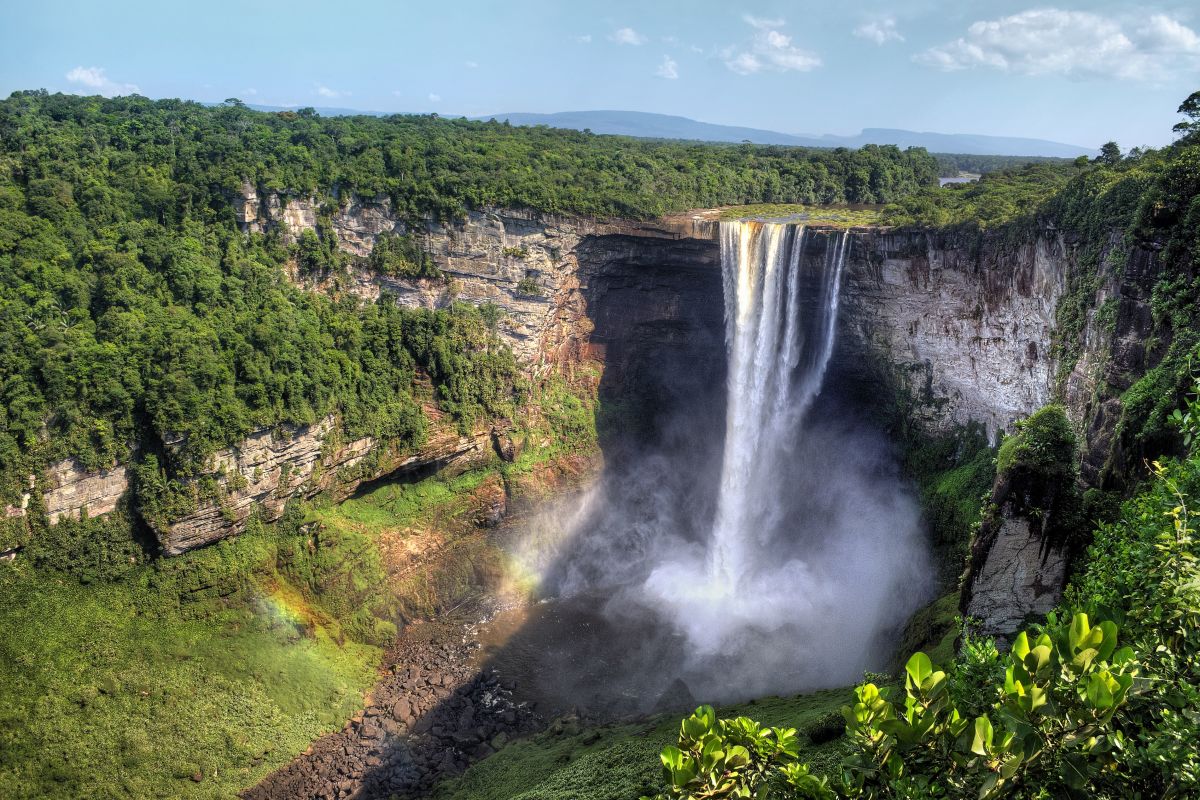 Located on Mindanao island in Iligan City (a destination known for its 23 waterfalls), Tinago Falls fleetingly appears through dense jungle as it plunges into a deep ravine. The 240-foot-tall waterfall stands out from others in the Philippines because it cascades in five tiers from the Agus River into a beautiful swimming lagoon. If you’re not an experienced hiker, skip climbing the 500-step staircase to the top and instead approach the falls from the easier loop path off of the main trail.

Shooting spray that can be seen for more than 30 miles, Victoria Falls carves a jagged stone border between Zambia and Zimbabwe along the Zambezi River. One of the largest waterfalls by size in the world at 355 feet tall and 5,500-plus feet wide, Victoria Falls was discovered in 1855 by Scottish explorer David Livingstone and named for Queen Victoria. A scenic way to see the falls is to book a trip by land from Cape Town, South Africa, to Livingstone, Zambia. Remember to wear adequate attire (think: boots and rain gear) since the Zambia side’s forest trails bring visitors within spraying distance of the waterfall.

Plummeting approximately 65 feet from Torc Mountain through the lush greenery of southwestern Ireland’s Killarney National Park, Torc Waterfall is one of County Kerry’s most popular attractions. Because it’s less than 5 miles from Killarney and an easy walk from a parking lot on the country’s N71 road, Torc Waterfall is often crowded by late morning. Start your visit by hiking a bit of the Kerry Way before walking up about 100 steps to a higher vantage point with breathtaking panoramas of the park’s emerald landscape and Middle Lake. Come prepared with a poncho since heavy rains are common. 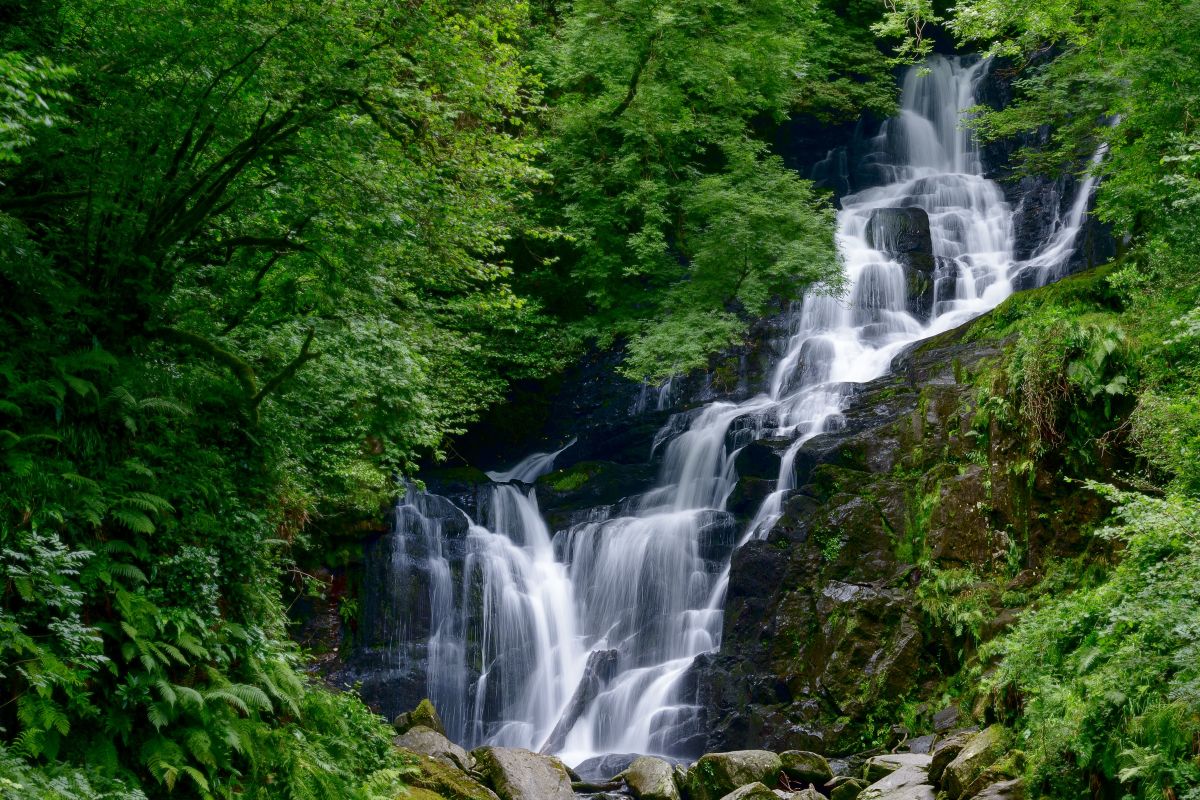