It was a rite of passage for young and wealthy British men from the mid-1600s to the mid-1800s. Having finished college, they would, accompanied by a knowledgeable chaperone, complete their education (and acquire status) on a Grand Tour of architecture, antiquities, art and music found only on the Continent.

But technology, in the form of trains and steamships, did the Grand Tour in. Once commoners (and, good heavens, women!) could, on an affordable Thomas Cook package, duplicate the experience en masse, it lost its appeal.

The upper class would find other ways to enjoy Europe, but that particular ritual faded away.

I believe we’re witnessing the renewal of the Grand Tour. It has many of the same trappings as the original: It is, for the time being, only available to the wealthy; it can be justified on the basis of personal growth; it bestows bragging rights.

There are, of course, significant and important structural differences. It may last only six hours instead of six months. The experience often confines movement, rather than encourages it; and attention is focused narrowly rather than broadly.

But despite the brevity and limited experience, I’m convinced that a trip to space (or near space) is no less life-changing for the traveler than a six-month Grand Tour, and perhaps in ways the traveler never expected.

I’ve written before about the “overview effect.” It is an epiphany, experienced by almost everyone who has gone into space, that the things that seem important to us on Earth — differences in politics, religion, philosophy, class, nationality, rank and race as well as status bestowed by the accumulation of wealth and material goods — are trivial. You look down on continents with no borders. You look at a planet that seems singularly isolated and fragile in the endless nothingness of space. You identify as an earthling, rather than as an American, Chinese, Russian, Nigerian, Iranian, Brazilian, Italian or Australian.

In last week’s Travel Weekly cover story, “Exploration tourism,” several modes of space travel were mentioned. In preparing that article, I had spoken at length with the founders of Space Perspective, who plan to send travelers to the stratosphere in high altitude balloons, about the philosophy that underpins their enterprise.

Space Perspective is only the latest chapter in the rather remarkable lives of its founders, Jane Poynter and Taber MacCallum. They’re best-known as participants of Biosphere 2, a project in which eight people sealed themselves in an artificial world for two years.

Space Perspective differentiates itself significantly from its rocket-propelled space travel competitors. Passengers do not go as high and ascend at only 12 mph. The gondola in which passengers ride is a pressurized cabin of relaxation, with unlimited Champagne (and a lavatory).

Poynter and MacCallum have been involved in unmanned commercial high-altitude balloons for quite some time and say that their greatest innovation with Space Perspective is “bigger windows.”

But their goal is to stimulate “new ways of thinking about the world” that passengers can bring back and, Poynter said, “do great things with it.”

Space Perspective, MacCallum said, will “give people a global context and help people organize their thoughts.”

“All great travel experiences expand your mind,” Poynter said. “They put a mirror to your own culture. One of the things we think about is, what if we had an entire society, and the majority have had this experience? It would change society.”

“If you talk to the astronauts,” MacCallum said, “they’ll tell you they went to the moon, and discovered the Earth.”

Although he was born centuries after the Grand Tour was in fashion, MacCallum is of a generation that felt “you had to go to Europe at some time in your life. It was culturally necessary.

“Going to space is going to be like that,” he added. “At some point, you will need to go to space before you leave this Earth.”

For now, space travel’s astronomical costs limit its audience. If history is an indicator, as technology improves, costs will come down. Who knows? Rockets (and balloons) may even, one day, sport the Thomas Cook logo. 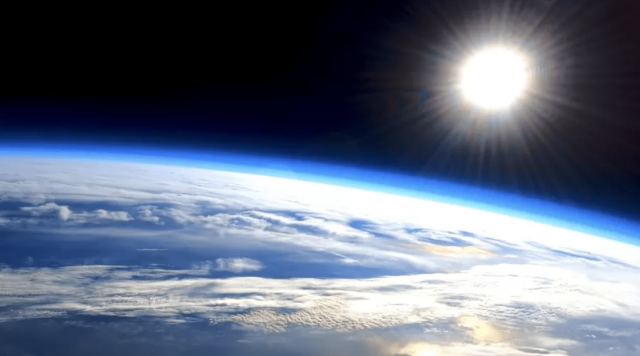