The opportunity hidden within uncertain times

Age has its burdens and its privileges, and one of the privileges is perspective. So when something unexpected, unprecedented and unfortunate befalls us, it can help to recall outcomes that followed previous dark days. There is no apple-to-apples comparison to chart how recovery might occur after the Covid-19 crisis has ended, but there are past examples of uplifting surprises that resulted directly from previous journeys into uncharted, uncertain and treacherous waters.

• Following 9/11, tourism in New York was kick-started less than a month later by a Portland, Ore., travel agent.

The post-9/11 landscape in New York had similarities to present-day New York. Broadway was dark. Restaurants were suffering. Hotel occupancy had plummeted. Retail was withering. And it felt inappropriate to enjoy the attractions that remained open in the Big Apple.

One exception to the cancellations and closings that hollowed out the civic calendar was the Columbus Day parade, scheduled that year for Oct. 8.

New York was not the only destination suffering. Fear of air travel meant that the entire travel industry was depressed.

Far across the continent, Sho Dozono, president of Azumano Travel in Portland, Ore., was also feeling the chilling effects of the terror attacks.

Finding himself in a world populated by citizens who were suddenly scared to board an airplane, he had to lay off 35 employees and put the remainder on a four-day workweek.

But an idea came to him. He was also chairman of the Portland Chamber of Commerce, and he offered the city’s business community an irresistible deal: A five-night trip to New York, inclusive of air, two nights at the Waldorf Astoria, a Broadway show and an opportunity to march in the city’s Columbus Day Parade, all for $379 (Dozono did not mark up the package).

In short order, he had 900 participants. The project gained widespread national media coverage, and it proved to be a critical event in the acceleration of the recovery of New York’s tourism economy.

In the end, his Flight for Freedom not only inspired travel to New York, but travel in general.

The attitudes and traditions that make New Orleans special and different have long been forged in adversity, and even disaster.

The need to make squirrel and possum edible led to Cajun cooking.

The response to a malarial atmosphere was architectural innovation.

Racial and ethnic divisions and poverty gave birth to Dixieland and zydeco, to Louis Armstrong and Boozoo Chavis.

Hurricane Katrina provided yet another challenge to the city. And its restaurant community, a pillar of the city’s tourism industry, took a leading role in the recovery. Though it faced extreme financial challenges, it fed first responders in the storm’s immediate aftermath. And it inspired young chefs to flock to the city and take part in its rebirth, infusing the city with energy and innovation.

Again and again, New Orleans has demonstrated that, over time, adversity can not only be overcome but can be an engine of progress. In the Big Easy, adversity inspires — perhaps demands — that the good times must roll.

• The Travel Promotion Act was born during the Great Recession.

The first full year of the Great Recession, 2008, was in most regards a low point for the travel industry. But it spurred governmental changes that, over time, have helped the industry greatly.

It was in that year that the Travel Promotion Act passed the House. The act was to eventually fund the creation of the nation’s first national destination marketing organization, Brand USA, which has proven to be a boon to inbound travel.

Also that year, the U.S. and the EU signed the Open Skies Agreement, which, among other things, opened London’s Heathrow to all U.S. carriers and created opportunities for European airlines to serve the U.S. from any point in Europe rather than from just their homelands.

2008 also saw the Visa Waiver Program expanded to include an additional seven countries.

The impact of these changes wasn’t immediate but was ultimately profound in powering travel’s upward trajectory for the next dozen years.

During our current lockdown, I have found music to be a welcome retreat and refuge from the depressing news about Covid-19. In particular, I find myself drawn to Louis Armstrong. He was born in New Orleans but moved to New York; I’ve often thought he embodies the spirit of both.

If one reads the lyrics of one of his best-known songs, “What a Wonderful World,” it’s an incredibly sappy ode to babies and blue skies and roses and rainbows.

But it is Armstrong’s voice — a blend of grit, experience and optimism — that makes it possible, even in the depths of darkness, to feel that the title is not mocking. It’s prophetic. 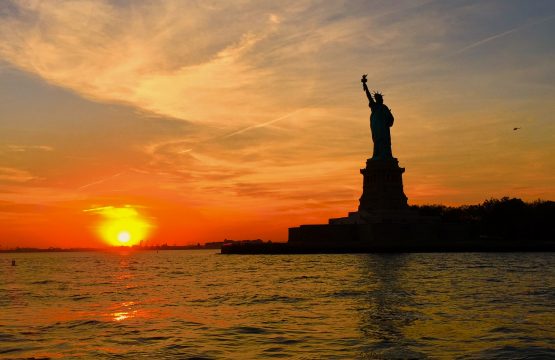