The psychology of vaccinations and travel

I couldn’t describe with any authority what is happening inside my body now that I’ve gotten my first Pfizer jab. But the effect on my brain was immediate, clear and welcome. If the other Americans who have been vaccinated by this point feel the same way, the travel industry’s hopeful forecast for an explosive recovery is assured.

For the past year, my outlook had been colored by an event that happened the first week of March 2020. I had drinks with an older friend the night before leaving on a business trip. When I returned, I’d discovered that, simultaneously with Covid-19 being declared a pandemic, he had been admitted to a hospital, was in an induced coma and was on a respirator, with no certain outcome. He did survive, though he needed significant rehab and really came back to “normal” only last month.

The effect on my brain from that experience was likewise immediate and clear. I viewed the virus as a serious threat, but one that could — fingers crossed — be avoided if I modified my behavior. As with many Americans, minimizing risk included avoiding discretionary travel.

My initial experiences in trying to get the vaccine may have a ring of familiarity: Although I am among the first group in my state to be eligible to receive one, the medical practice I go to said, essentially, “don’t call us, we’ll call you.” When I went on the state website to look for an appointment, the first one available was in Syracuse, on April 2 — more than two months and 250 miles away.

But an earlier opportunity came along. In fact, I think part of the thrill I’m feeling right now from having gotten the first installment of the vaccine is that, from the moment I found out it was possible until the moment the nurse swabbed my arm with alcohol, only 90 minutes — albeit somewhat manic minutes — passed. I had gotten a notification on my phone that my medical group had received vaccines, and appointments were available. Their app showed several branch offices; an appointment was open in just 90 minutes on 55th Street, a little over a mile from where I live. I hastily confirmed; despite the heavy snow that was falling, I could easily walk there in time.

But when looking at the confirmation again, panic welled up. Yes, it was 55th Street — but 55th Street in Brooklyn. I live in Manhattan. There was a snowstorm. The subway would not get me there in time.

So, for the first time in almost a year, I hailed a cab. I sure hope adrenaline has an additive effect to the protective power of the vaccine because, for the whole ride over, I was in a state of alarm that I wouldn’t make it in time.

But I did. And even though it’ll be three weeks before a second shot moves me closer to full liberation, I already feel more optimistic. Possibilities seem to have increased tenfold. And one of the first people I told that I had received my shot was my travel advisor.

I don’t think my reaction is unique. Indeed, in an earnings call last week, Royal Caribbean Group CFO Jason Liberty noted that there is “a strong relation to booking volumes and vaccines,” which helped explain a surge of bookings during Wave season this year.

Two milestones were reached on the day I was vaccinated: A fifth of the U.S. population had received their shots, and it’s estimated the 500,000th fellow citizen died from the virus.

That number of dead remains profoundly disturbing. And I’m aware that there are folks who, even after getting the vaccine, still aren’t tempted to travel or put themselves into a situation where they feel exposed to Covid-19. Almost a year into the pandemic, perhaps they feel they’ve learned they can live with its limitations and they’re willing to let more time pass before venturing forth.

Nonetheless, I do hope they let their vaccinated friends and relatives come for a visit, if even a double-masked visit. I know my first trip will be to see my mother in Chicago, my daughter in L.A. and my wife’s family in Austin, Texas. I haven’t seen any of them in over a year, except on Zoom. When pondering the limitations of Zoom, think of what it would be like if it were the only way to see and talk to your family.

But ultimately, it isn’t only the difference between seeing someone on a screen and sitting face to face. It’s also the broader context: the context of Chicago, of L.A., of Austin. There’s something about enjoying places with other people that increases your appreciation of both the person and the place. 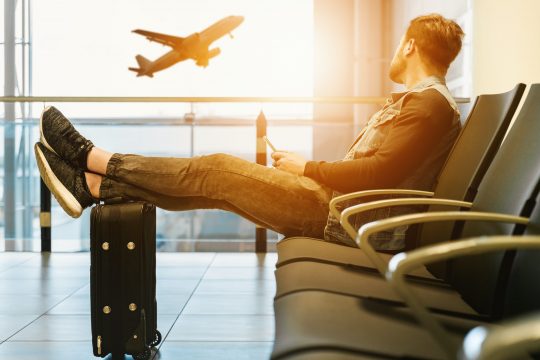