Travel advisors save the day with Covid-19 backup plans

Six advisors recount how being forced to scrap and replan itineraries in the face of changing pandemic requirements led to memorable experiences and happy clients.

Throughout the pandemic, the travel landscape has never been more fluid. On top of all the usual complexities of travel planning, advisors have also had to grapple with last-minute border restrictions; shifting vaccination, testing and quarantine requirements; flight cancellations; and innumerable other variables.

As a result, advisors have frequently had to think fast and keep a Plan B, or even a Plan C or D, in their back pocket. But, as demonstrated by the back-up itineraries crafted by the six advisors below, sometimes a scrapped Covid-era itinerary can pave the way for an amazing — albeit very different — travel experience.

The original plan: I had a bar mitzvah group of about 40 people planning to go to Israel for around 10 days this summer.

The pivot: The entire Israel trip had to be canceled. So, I rerouted them to the south of France. We had a little over a month to plan that, with the seven-night trip set for the end of August. And while we were planning, there was a new vaccine requirement and a lot of confusion, especially because we had children of all ages on this trip. We had to get everyone 17 and older vaccinated at the last minute, because even though the adults were all vaccinated, some of the teenagers were not. Then, there was also everything from securing venues and catering to finding a DJ and a reputable photographer. To plan all that a second time from scratch wasn’t easy. And the guests keep kosher, so finding a kosher caterer in the south of France at the last minute was definitely challenging. I ended up having to bring someone in from Paris. But overall, I think the trip exceeded their expectations. Israel is kind of an expected place to go for religious events like a bar mitzvah. But the south of France was unexpected, and so I think the guests were blown away. It ended up being a blessing in disguise, and I got a lot of really great feedback.

The original plan: A honeymoon couple had booked an April 2020 European river cruise before contacting me.

The pivot: As things with Covid began to unfold, this couple reached out to me. They knew their cruise was going to be canceled, but the idea, initially, was to keep them on another river cruise and just move the location. We looked at South America, but we quickly realized that wasn’t going to be an option either, so Plan C became more about what we could do domestically that might still have a European vibe. We ended up pivoting the entire trip: their one-week river cruise turned into an 11-day stay in New Orleans in October 2020. One of the nice things that’s happened recently is that we’ve all sort of realized that there are these hidden gems right in our own backyard. And while New Orleans isn’t a hidden gem, there are certainly aspects of the city that people tend to forget about. Everyone knows about Mardi Gras and the parades, but the city also has very deep influences from Spanish, French, African and Caribbean cultures. So, for this trip, my goal was to find restaurants and unique experiences that spoke to those influences, whether that was a great, local spirits producer or a wine tasting or a museum. The only complaint the clients had at the end of trip was about how much food they ate. They really loved having the opportunity to visit a city they’d never been to but had heard so much about, and they even told me in the follow-up call that they want to come back and spend more time in New Orleans.

The original plan: I had a couple who wanted to do a weeklong river cruise on the Danube in 2020, between Budapest and Vilshofen, Germany. After the cruise, they also wanted to stop in London, so we had a whole post-cruise London itinerary planned, as well.

The pivot: The cruise was pushed to August of this year, and we had been very hopeful, all the way through July, that London was still going to happen. But when we saw new regulations from the EU and that things weren’t clear around going to London, we sat down with the clients and went through a list of suggestions. So, instead of London, we decided to do seven nights in Switzerland, which was open, and Covid restrictions had basically been lifted for vaccinated residents from the U.S. And our clients had the most amazing time. They came back and told us that it was the highlight of their trip. The typical requests everyone seems to have for Europe are the highlight cities of London, Paris, Rome, but we’ve found that pairing those together is cumbersome, since you’re now tracking the requirements of three different destinations. So, we’ve actually taken a lot of people who had plans for a multicountry trip and moved them to just one or two countries, because we know that will work.

The pivot: There were so many destinations, like Bali, that we couldn’t travel to, but in September 2020, Dubai’s tourism board and Travel Leaders invited me on a fam trip, and I got to see firsthand how Dubai was handling Covid and making tourists feel safe. As soon as I got back, I said to myself that I really want to put together a group trip for 2021 to Dubai. So, I changed the destination from Bali to Dubai. I also do a lot of travel for celebrities in the music and television industry, and one of my clients who I first reached out to about the group trip is a reality TV show star. She joined, and it sold out. And then, a few months before we were due to travel, that client said, “I’d like to renew my vows in Dubai and have it televised.” So, suddenly, I had three things going on at the same time. I had my original group of 30 couples, I had over 127 people coming to attend the vow renewal, and I had about 15 people on the TV production team. And this ended up bringing me so much attention on Instagram, because everyone was posting about this trip. I went from 2,000 followers to 16,000 followers just within the time period that I was in Dubai. Once I returned, I had such an
overflow of people wanting to book trips with
me that I sat down with my team and we decided
to start charging a $250 consultation fee. Instagram was a whole new world for me, and I had
no idea what Instagram could do for travel advisors. But it has really brought my business to the next level.

The original plan: I had a couple who got married in June 2020, and they had a two-week trip of a lifetime to Italy planned for their honeymoon.

The pivot: The couple had to cancel the Italy trip, and they were devastated. But I sent them on a drivable vacation instead, to the Cliff House in Maine, which is a really special place even though it’s close to home. And they loved it so much that they went again this year for their anniversary. And they’re going to go again next year to celebrate their anniversary. So, a yearly tradition was born. And they’re still going to go to Italy next year. But what’s happened with that is that each time it has been postponed, we made the trip a little bigger. Initially, they were just going to do Florence and Tuscany. And then they decided to add on Rome. And now, we’re on our third time booking it, and they’re adding the Amalfi Coast. The trip is getting longer and a bit more elaborate because they’ve had to wait. If you plan a trip and sit on it for two years, you start to think of ways to make it bigger and better.

The original plan: I had a couple who had a fabulous itinerary planned for Morocco, Portugal and Spain.

The pivot: We started planning the trip in 2019, rebooked it in 2020 and rebooked it again in 2021. Then, just a few months ago, we decided that, for ease of travel and because of all the uncertainty around rules and regulations, they would just go to one country — Spain — this October for two weeks. It was just too ambitious to do three. And whenever you focus on just one destination, your ability to see things in greater depth increases. Now, in addition to classic destinations like Madrid and Barcelona, this couple is adding other interesting places like Seville and San Sebastian. And because they’re food and wine aficionados, the clients can also add some unique behind-the-scenes experiences. (We can get them into some great restaurants that, before, they wouldn’t have had time to do.) They’re now able to hop more around Spain and really get the full flavor of the destination. 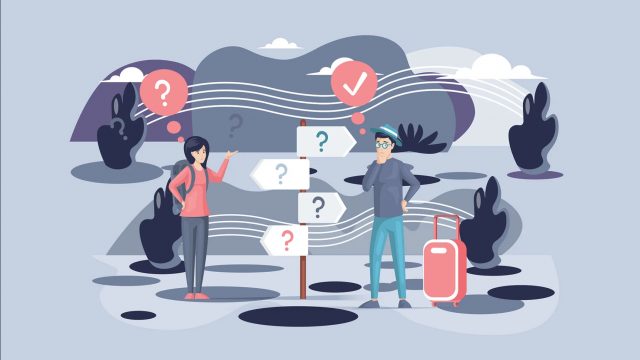