Early January is the time of year when many cruise ships and certainly all three of Cunard’s Liners are getting ready for a complete change to their usual schedules as they prepare to set off on their annual three month World Voyages.

This is a time of great excitement, both for the embarking guests and for the Ship’s Company as well (by the way, the “Ship’s Company” is the expression for all those who work on board ship, both Officers and Crew alike).

A World Voyage, which as I say is usually for a period of around three months or so, is a time of complete change from the normal routine – perhaps especially for Queen Mary 2, as she spends so much of the year on the seven day Transatlantic Crossings between Southampton and New York. The cruising area is exciting geographically, the regions passed through are usually the really warm areas of the world, which everybody likes and the ports visited are some of the most famous destinations in the world!!

One of my personal highlights of the Cunard World Voyages was always the two days spent in the iconic port of Sydney, Australia. We always berthed the ships at Circular Quay in Sydney Harbour, which is situated right between the Harbour Bridge and the famous Sydney Opera House! It was always my opinion that as soon as we were alongside the berth at Circular Quay we instantly became the best hotel in the whole of Sydney – nothing could surpass that location with its accompanying views.

Of course there is no requirement for guests to take the entire World Voyage, although some do just that and also seem to do it each and every year! Instead, you can take one of several “legs” or “sectors” which would mean spending between perhaps two and six weeks on board ship. An example would be to take the Sydney to Hong Kong sector – always a popular choice as you might visit such great destinations as Brisbane, the Great Barrier Reef, Darwin, Singapore, Malaysia and Vietnam before the unique experience of sailing into Hong Kong harbour! There are of course many other sectors to choose from. 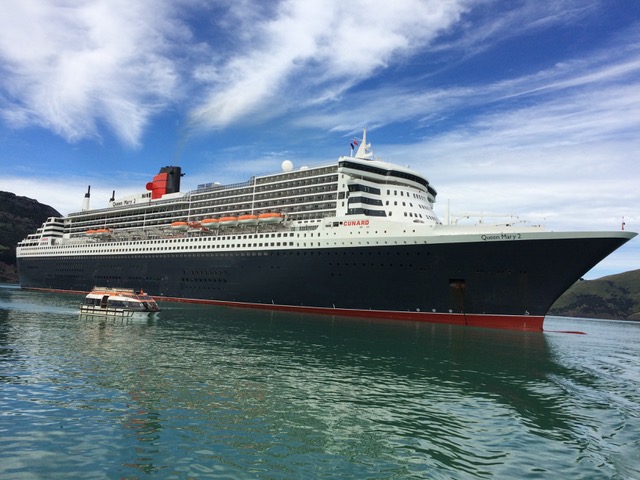 The accompanying photos this week are of Queen Victoria passing Queen Mary 2 in Hong Kong Harbour during their respective World Voyages and another of Queen Mary 2 at anchor in New Zealand, taking guests ashore in the ship’s tenders.

I mentioned some guests do take the entire World Voyage and you would be surprised at just how many do this. For them it seems like an annual experience and certainly for the British and European guests who do this, it is an ideal way to escape the main part of the winter and head for warmer climes. They benefit from three months during which they don’t have to heat their homes so much, they don’t have to shop or cook, the scenery arrives outside their stateroom window as if by magic and to cap it all, they are fully entertained in the show lounges every evening! I for one like their thinking very much…!!

Whether you are thinking of a World Voyage, a cruise of somewhat shorter duration or indeed any other type of vacation as many people are at this time of year, don’t forget to use The World’s Greatest Vacations as your inspiration.

As far as cruising goes, which of course has been my own speciality and career for many years, culminating in the honour of becoming Captain of Queen Mary 2, a guest once explained to me that he had quickly realised that there is no such thing as a non-cruiser; instead there are just people who haven’t cruised yet, but will do at some time….!!!!

Whatever your thoughts are, happy planning…!!