Hello again everyone and welcome to my monthly blog for The World’s Greatest Vacations!

As I write this and as you may have seen from the front page of this website, CEO of The World’s Greatest Vacations, Richard Shane has just boarded Queen Mary 2 in New York for another iconic Transatlantic Crossing to Southampton, England, but this time he is in the company of some heroic Veterans of the Second World War who are making the Crossing to revisit the scene of their action – the Normandy beaches of France where they made their landings to bravely fight alongside the other Allied troops.

Cunard is always proud each year to take these Veterans across the Atlantic and I was privileged enough to be in Command of Queen Mary 2 last year, 2018, when we carried our previous group over to Southampton.

For all their advancing age, they are still a great bunch of guys and are very willing to answer questions and even to arrange a talk show in the Main Theatre for our other guests on board to enjoy! I was very pleased to be able to have a group photograph with these inspiring people, which I’ve included alongside this blog.

On to more Nautical matters and I find I am often asked about the meaning and purpose of the multitude of navigational buoys to be seen floating in just about all the harbours and narrow waterways of the world.

We see red buoys, green, black and yellow, black and red and red and white buoys securely moored to the sea bed and obviously there for a very specific purpose. Yes, even in these days of GPS satellite navigation and fully electronic navigational charts with radar pictures overlayed onto them, we still rely on the “Mark One Eyeball” as we say, to look out of the Bridge windows and spot the navigational buoys to affirm to ourselves exactly where we are and that we are in safe water.

So what do they signify? Well, the red and the green buoys indicate the safe water channel in which ships can safely proceed, as the water is confirmed to be deep enough for them to safely float. In many parts of the world, the red buoys are kept on the port (left) hand side of the ship as the ship enters the port and the green buoys are kept to starboard (the right hand side). That is known as the “System A” type of buoyage, however in the Americas “System B” is used wherein the rule “red right returning” is used, which means you keep the red buoys on your right hand side (starboard) when returning into port. So it is important to recognise which system is in use where you are in the world at the time, however it is only the colour of the buoys which differs – the shape of the buoys remains the same worldwide, which is a big help in recognising them!

Cardinal buoys however, are the same the world over and these are the black and yellow buoys with black cones for top-marks mounted on the top of the buoys.

These are named “cardinal” as they mark the north, south, east and west and may be positioned around a particular danger, such as a dangerous wreck on the sea bed.

There are also black and red buoys with two black spheres on top which simply mark an isolated danger, red and white buoys which are known as safe water marks and which may be at the outer end of a buoyed channel when all water from then on out to sea is of a safe depth, as well as red and green buoys to mark the “preferred channel” to use.

All navigational buoys also have a distinctive flashing light at night which also aids in recognising which type of buoy it is. Many buoys now self-power their night time flashing lights with solar panels which are also mounted on the actual buoy. Finally, it is of course vital that these buoys stay where they are supposed to be and to that end they are securely anchored with a long length of heavy chain to a solid concrete block on the sea bed.

I do hope that this is of interest and that it answers at least some of the questions you may have – I am sure there are many amateur but enthusiastic sailors out there reading my blogs and these buoys are as important to you and your crew and guests as they are to a giant ship such as Queen Mary 2!

Until next month, safe travels and don’t forget to plan your next adventures through the pages of The World’s Greatest Vacations…!! 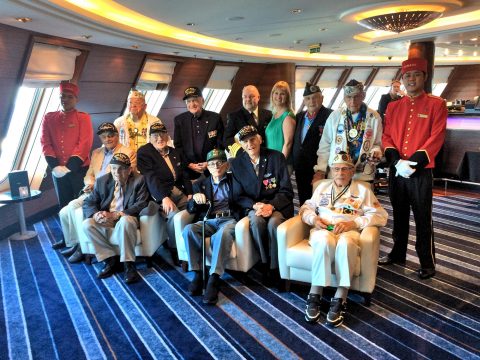