3 Potential Airport Security Changes Coming to a Terminal Near You

If you loathe long airport security lines, you’re in luck: Advanced airport screening technology is aiming to help expedite the process. In June, the Transportation Security Administration started testing biometric technology at Denver International Airport and Hartsfield-Jackson Atlanta International Airport, which relies on fingerprints in place of IDs and boarding passes at security checkpoints. And beyond utilizing biometric technology to authenticate a passenger’s ID with contact or contactless fingerprint scanning, the TSA may also roll out facial-recognition software that would help determine a passenger’s identity, says Steve Karoly, TSA acting assistant administrator for requirements and capabilities analysis.

Why swap paper or digital boarding passes with biometric authentication technology? While the primary goal was to boost security effectiveness, the ID validation technology also has better intelligence capabilities to analyze passengers and their belongings and can offer a seamless passage at security checkpoints, with the potential to decrease wait times, Karoly says. Currently, the technology is only being tested on passengers with TSA PreCheck security clearance who have already opted to provide their fingerprints for expedited clearance with PreCheck. However, the TSA is working to integrate other U.S. Customs and Border Protection trusted traveler programs such as Global Entry and Nexus (expedited clearance to Canada available for a $50 fee). All passengers who voluntarily opt in for a boarding pass-free screening are still subject to a typical TSA screening, and the data will be used to analyze the efficacy of an automated check-in process in the future.

But that’s not the only possible airport security game-changer. In the future, you may also see automatic screening lanes and computed tomography 3-D screenings at the airport. Wondering how the pilot programs might impact you? Here’s what you need to know about potential technology and screening process developments in in the works – along with expert tips for navigating the change for a smooth and nuisance-free experience at security checkpoints across the country.

If you’re approved as a low-risk passenger through PreCheck, the next time you travel through Atlanta or Denver and you proceed to an expedited PreCheck security lane, you can volunteer to be verified with a biometric scanner. “Biometric authentication relies on your physical or behavioral traits to identify you,” explains Jeff Klee, CEO of CheapAir.com. With biometrics, authenticating ID is more secure because the data analyzes characteristics such as facial features and other attributes that are difficult to duplicate, he explains. “In the future, it’s possible that biometrics will allow low-risk passengers to be quickly identified, allowing TSA agents to focus more time on rooting out suspicious behavior and identifying high-risk travelers,” Klee adds. After you provide your fingerprints, the information is cross-checked through Secure Flight, a system used to identify and match passengers compared to trusted traveler lists, Karoly explains.

If you’re on the fence about enrolling in PreCheck, keep in mind that apart from the potential time-saving benefit of biometrics, members can leverage other conveniences as they pass through security, such as being able to keep on belts and leave their laptops and quart-sized toiletry bags in their carry-on rather than placing them on scanners, Klee says. “These tiny tweaks for each person do add up to a faster, more streamlined and efficient security experience overall,” he adds.

Aside from PreCheck and other trusted traveler programs, the service Clear enables flyers to skirt security lines and use either a fingerprint or iris scan to authenticate their identity, says Tom Spagnola, senior vice president, supplier relations at CheapOair. Clear is currently in 19 cities across the country, “but has not been able to get the traction and exposure that TSA programs offer,” Spagnola says. Enrollment for Clear costs $179 per year; PreCheck costs $85 and is valid for five years.

Major airlines such as Delta Air Lines and JetBlue Airways are also working with U.S. Customs and Border Protection to utilize biometrics. JetBlue launched a pilot program to experiment with facial-recognition software for select flyers to match passengers’ faces against the CBP’s database out of Boston’s Logan International Airport, while Delta tested fingerprint identification for select Delta SkyMiles members enrolled in Clear out of Ronald Reagan Washington National Airport.

Computed tomography is another tool coming to airports across the country. The high-tech 3-D screening machines are currently used to vet checked luggage, Karoly explains. Now, the TSA is testing CT capacity for 3-D scanners, rather than the static, 2-D X-ray scanners currently used across the country. The technology “electronically unpacks the bag and puts it back together,” he explains. That way, TSA agents can use the faster technology to digitally sort through belongings quickly and get a better sense of items within a bag, easily pinpoint prohibited contents and detect explosives. The TSA rolled out screening lanes equipped with CT technology in Logan International Airport and Phoenix Sky Harbor International Airport.

How does it help you? If the machines are introduced across the country, security screenings with be faster, with flyers being able to keep laptops, electronics and liquids inside their bags before placing them on the scanner. “While CT scans have been used for about the past 10 years, this new wave of machines are smaller, more powerful and faster,” Klee says.

In another effort to speed up airport security screenings, the TSA has introduced automatic screening checkpoint lanes at select airports. American Airlines, Delta and United Airlines are among the carriers that have piloted automated lanes that aim to reduce security wait times and elevate security effectiveness with features such as countertops that allow multiple flyers to place items onto the conveyor belt at the same time and in larger bins to reduce the wait times at popular checkpoints. If an item placed on the conveyor belt prompts an alarm signaling an agent for added inspection, it is directed into a separate area, so other passengers can continue to their gate without interruption and delays at security checkpoints. The automated screening lanes are available at major hubs such as John F. Kennedy International Airport and Hartsfield-Jackson Atlanta International Airport, with more screening lanes in other major hubs across the country in the works, Karoly says. 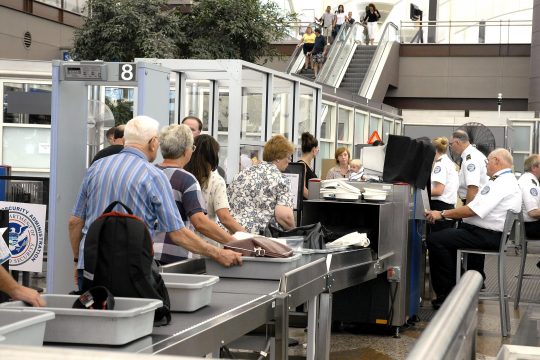