5 Night Tours Worth Staying Up For

When the sun goes down, embark on an after-dark hike, ghost tour or northern lights trip.

Instead of embracing vibrant nightlife scenes with live music, cocktails and riotous parties, consider experiencing the best of a city with a memorable night tour. These unique tours are becoming more popular, as they offer a chance to see sights that many other travelers don’t get to experience. After all, sometimes a nocturnal excursion is the only way to see a destination’s top attractions. Here are some of the coolest after-hours tours, from northern lights trips in Scandinavia to animal encounters you’d never get in daylight.

Gaze at the Northern Lights in Scandinavia

Watching colorful waves of light dance across the night sky is one of the most mesmerizing ways to experience Scandinavia. The aurora borealis (or the northern lights), is clearest in winter, and gets easier to see the closer you get to the North Pole, which is why Scandinavia has become one of the most popular places to see the phenomenon. In Iceland, northern lights hunters can join boat, bus or Jeep tours. In Norway, tours include nighttime dog sled adventures and snowmobile rides. Finland encourages visitors to not only go see the lights, but to sleep under them at a variety of glass-topped hotels and igloos. The challenge – and allure – with northern lights tours is that the skies are unpredictable, so you never know what you’ll see.

There’s something magical about being surrounded by the world’s tallest trees. And now, a new nocturnal art installation makes the experience even more surreal. In Rotorua, on New Zealand’s North Island, the Redwoods Treewalk is a suspended trail of 23 bridges strung among the 100-plus-year-old trees. The site partnered with designer David Trubridge to debut Redwoods Nightlights, a series of giant lanterns and colorful lights that you can explore on a self-guided tour after dusk. What’s more, the whole installation is sustainable, making it as eco-friendly as it is alluring.

One of Puerto Rico’s most popular sights is only visible when it’s dark. Thanks to small aquatic organisms that glow in the dark, the island’s bioluminescent bays emit an electric blue glow at night. Of Puerto Rico’s three bioluminescent bays, Mosquito Bay in Vieques is the brightest. In fact, it’s considered the brightest in the world. Kayak tours lead through the mangroves, while pontoon boats carry those who want a little less exertion. Try to time your visit with a new moon, when the dark sky makes the bay glow even brighter.

On Hawaii’s Big Island, one of the most majestic creatures – the manta ray – is best seen at night. Why? The rays, which grow up to 12 feet across, feed on tiny plankton, which are attracted to light. A number of tour operators have capitalized on this, outfitting divers and snorkelers with lights at night to give them a closer look at the peaceful giants. Reputable operators such as Jack’s Diving Locker and Ocean Eco Tours organize boat tours to popular Kona Coast feeding sites. Suit up, dive in and watch for the rays to show up for dinner.

Join a Ghost Tour in the South

Ghost skeptics may have their beliefs tested on these spooky spirit hunts. Ghost tours are a popular nighttime activity in many U.S. cities, especially in the South. Charleston, South Carolina, and Savannah, Georgia, have rich histories of paranormal activity, and walking tours here delve into stories of bloody Civil War battles, slighted lovers and mysterious murders. Meanwhile, in New Orleans ghost hunts come with tales of voodoo and haunted cemeteries. Whatever tour you decide to take, don’t forget a camera. 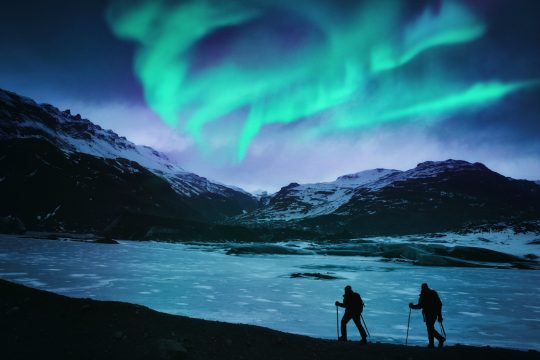