A Guide to the Best and Worst Times to Travel

Use these tips and tricks to get the best deal on your next flight.

WHEN BOOKING A vacation, most travelers are looking to snag the best deals possible. This includes finding the cheapest days to fly and book air travel.

The good news is that, according to trade association Airlines for America, we are living in a time when airfare is already affordable. “We are in the accessible age of air travel,” says communications director Katherine Estep. “Customers are benefiting from an unprecedented combination of choice, competition, access and affordability.”

However, the average round-trip flight in the U.S. in 2018 still had a base fare of about $340. This can add up quickly, especially if you are traveling with children or want to take more than one vacation per year. But with the following tips in hand, you can save on airfare for your next getaway.

Understand How Airfares Work for Your Destination

Flight prices fluctuate over time, so it is important for flyers to understand what qualifies as a good fare to a specific destination or destinations. “It’s best to start looking at fares long before you’re ready to book, so you know what they look like,” says Julie Ramhold, consumer analyst at coupon website DealNews.

Finding the best airline fare is just like saving money on any other item. If you want to save as much money as possible on a bag of potato chips, for example, you’ll first need to know the lowest price that the supermarket ever sells it for. Then, your goal will be to buy those chips when the price bottoms out. The same goes for airfare: Check prices weekly for destinations on your list over a period of time to get a sense of what is and what is not a good deal. That way, when you see a price lower than usual, you’ll know it’s time to book.

To stay in the know, sign up for fare alerts from your favorite airfare comparison site or join a travel discount website like Scott’s Cheap Flights. The site offers the choice of a free service or a premium membership that alerts you to mistake fares (when an airline accidentally posts a much lower price than intended), holiday and summer rates, and other top deals.

Know the Right Day to Book Your Flights

According to some travel insiders, booking your flight on a Tuesday can get you the best airfare deals. “Since many travelers use the weekends to research and plan their vacations, Monday is usually the day they finally make their purchase,” explains Tom Spagnola, senior vice president of supplier relations at travel agency website CheapOair. “To keep booking levels up for the rest of the week, Tuesday is a popular day for airlines to launch sales and promote special fares.” Southwest Airlines, for example, almost always posts its sales on Tuesdays.

Still, not every expert agrees with this approach. “There’s no cheapest time of the week or day of the year to book flights,” says Scott Keyes, co-founder of Scott’s Cheap Flights. “Cheap flights pop up all the time and, like the stock market, there’s little that can be done to predict in advance which cheap flights will pop up when with any specificity.”

Instead of picking a set day to make your travel plans, Keyes says those looking to save money should mainly avoid booking at the last minute. He goes on to note that you’re most likely to see cheap deals on domestic flights one to three months ahead of your travel date, while international flight prices are at their best two to eight months before departure.

Similarly, Ramhold warns against booking flights later than six weeks before your intended departure date. “That’s usually the last time we see low prices before they start to increase,” she says.

Determine the Best Times to Fly

While booking your flights on a Tuesday versus a Thursday may not score you a lower fare, experts agree that flying costs significantly less on some days (and at some times) than others. Spagnola advises travelers skip flying on Fridays and Sundays, while Keyes says Tuesdays, Wednesdays and Saturdays are the most affordable days for air travel. As far looking for specific departure and arrival times, taking off early in the morning or landing late at night often yields cheaper rates.

Ramhold agrees that, if you’re looking to get away for the weekend, it can cost less to fly on a Saturday than a Friday. “Many travelers prefer to leave on Friday and return on Sunday, but if you can plan your weekend to leave on Saturday and return on Monday, you could save on your fare,” she says. For international travel, Ramhold recommends flying on a Thursday for the best prices.

When it comes to times of year, Spagnola says that January through March and September through November are considered low seasons for travel to most destinations – especially Europe. “The crowds are a lot less, airline prices are very cheap, costs of hotels and vacation packages are heavily discounted and people can take advantage of great deals when Europe overall is slow,” he says. “If you push back any vacation time after the holidays and before the spring/summer peak seasons, you’ll definitely find excellent pricing.”

Experts agree that both the summer (Memorial Day through Labor Day) and winter holiday seasons (Christmas through New Year’s Day) have the costliest airfares, with deals few and far between. Keyes explains that this is because students, teachers and families can often only travel when school is out, so the surge in demand drives prices up. If you must fly during these times, consider traveling on the holiday itself to save some money. Spagnola also points out that flights to warm-weather destinations like the Caribbean tend to cost more during North America’s winter season.

Save Money with These Other Fare Hacks

Once you’ve considered the tips above, think about comparing fares across neighboring airports as well. “Many major hubs have more than one airport, and you could end up saving more by flying into a smaller hub rather than the busier one,” Ramhold says. “For instance, in London, you could opt to fly in to Heathrow, but you might be able to save by choosing instead to fly in to Gatwick.” Even driving a couple of hours to an airport in another city can be worth it if there is a significant difference in airfare.

Keyes also suggests being flexible when choosing your destination. “Giving yourself permission to go wherever a cheap flight pops up is key to not overpaying for flights,” he says. “Rather than overpaying for somewhere at the top of your bucket list, book the cheap flight to somewhere else you’re interested in that’s available today.”

Finally, consider choosing your favorite airline and flying on it as much as possible to accrue frequent flyer miles. You may be able to use these points to book free airfare in the future. Signing up for a credit card with certain airlines can also save you money, thanks to perks like waived luggage fees. Be sure to research your program to take full advantage of its features. For example, after meeting certain flying requirements, frequent Southwest Airlines customers can earn a companion pass to bring one person on the plane with them – free of charge – for up to two years. 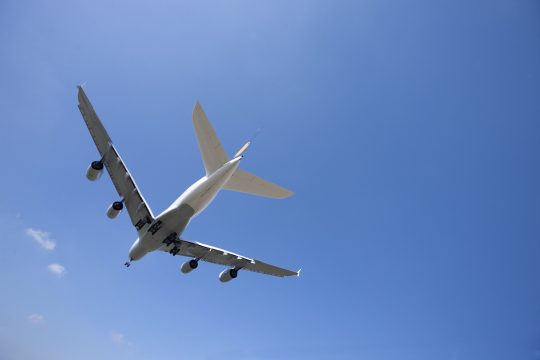