Crimea.Playground of the tsars. “Russia needs its paradise,” Prince Grigory Potemkin, Catherine the Great’s general, wrote in 1782 urging the annexation of Crimea, and no wonder. The Crimean Peninsula, with its voluptuously curved Black Sea coast of sparkling cliffs, is paradise—with Riviera-grade vistas but without Riviera prices. Balmy with 300 days of sun a year (“It is never winter here,” said the writer Anton Chekhov, who had a dacha near Yalta), the place served as the playground of tsars and Politburo fat cats. Russians practically wept when, after the breakup of the Soviet Union, Crimea was pulled out of the orbit of Russian rule and became part of an independent Ukraine. A trace of Soviet hangover endures in the form of unsmiling babushkas and concrete block architecture. Visitors can tour the once secret nuclear-blast-proof Soviet submarine base in Balaklava, a piece of Cold War history, now a museum. Afterward, retreat to one of the briny health resorts of the west and east coasts for a therapeutic mud bath, or go for a run down to Livadia Palace in Yalta, scene of the 1945 conference that reconfigured postwar Europe. 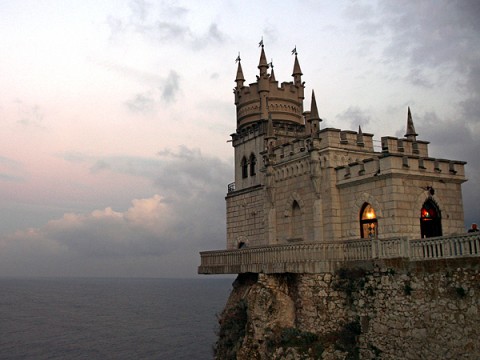