How often do you get to meet the chef behind the plate? With Sandals’ addition of Indian cuisine, we want you to be sure that Sandals is delivering an authentic Indian dining experience! Enter 24 year-old, Sous Chef Vinoth Venkatapuram Gajendiran, chosen to oversee the kitchen at Sandals Resorts’ first-ever Indian restaurant, Bombay Club, at the new Sandals Barbados Resort. 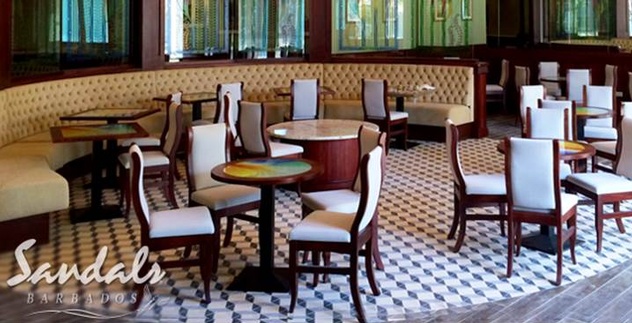 Though young, his experience in gourmet Indian cuisine and natural talent for cooking makes him the perfect chef for the job. Chef Vinoth was born in Thiruvallur, India, in the Southeastern tip of India.  As a young boy, he often helped his grandmother cook meals for their large family. In his early teens, he took on a part time job at a local restaurant to get a taste of the industry before investing heavily in his future career.

At age 17, he received a diploma in hotel management from the Canan Fort Institute of Hotel Management and Catering Technology. After graduation, his first job opportunity came as a chef assistant at the 4-star luxury boutique hotel, The Residency Tower Thiruvananthapuram. There, he was introduced to regional dishes from all over India, as well as exotic international cuisines.

Chef Vinoth then took a position at the Karaikudi Chettinad, a chain of restaurants specializing in the cuisine of the Chettinad region of India. In just one year, he was promoted to Chef de Partie and continued in that role before taking a Chef position at the YMCA International Guest House in Purasavakkam.

Through a recommendation, Chef Vinoth ventured to the Caribbean to take on a chef position at the Total Treat restaurant in Ocho Rios, where he specialized in blending Jamaican and Indian flavors. After a couple of years, and prior to joining Sandals Resorts, Chef Vinoth became the Head Chef at the esteemed Ocho Rios Passage to India restaurant, long considered one of the top Indian restaurants in the country.

Now at Sandals’ premier resort in Barbados, Chef Vinoth is looking forward to putting the Indian cuisine at Bombay Club “on the map” with Sandals guests. “I am excited to bring the flavors of India to Sandals’ guests, and I hope to turn Bombay Club into the number one dining destination at Sandals Resorts.”