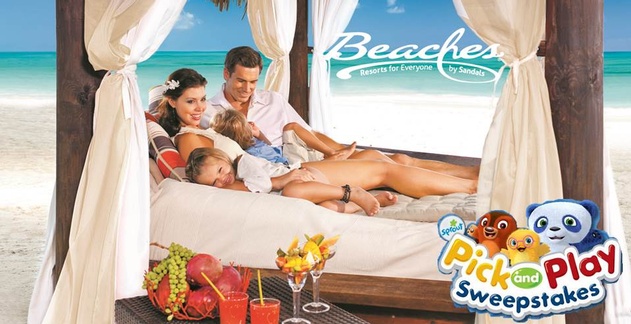 Ready to get out of the winter cold and into the tropical sunshine with a family adventure in the Caribbean? Well you’re in luck, Sprout and Beaches Resorts have teamed up for the “Pick and Play Sweepstakes”! Sprout, the first 24 hour preschool network, has launched its newest original series, “Ruff-Ruff, Tweet and Dave”, which follows three best friends: Ruff-Ruff, a lovable, instinctive pup; Tweet, a cautious, thoughtful bird; and Dave, an imaginative, quirky panda on adventures that ignite the imagination. This full CGI series features these furry friends on adventures that allow for interactive play between kids and the characters through a companion app experience, bringing everyone closer together by interacting while they watch (available on iOS and Android)!

To celebrate Ruff-Ruff, Tweet and Dave’s new adventures, Sprout is giving you the chance to get away on your own family adventure bringing everyone closer together with a Grand Prize Vacation to any Beaches Resort in Turks & Caicos or Jamaica!  Each Friday through March 20th, watch new episodes of “Ruff-Ruff, Tweet and Dave” at 11am ET, then visitwww.pickandplaysweeps.com to answer a question from the show and you’ll be entered for your chance to win some unforgettable family fun beneath the Caribbean sun!