As the days of summertime beach-lazing and boardwalk-strolling shift to autumn leaf-peeping and festival-going, Europe beckons. With a dip in crowds and reduced flight and hotel prices, fall is an enticing time to jet off to an exotic locale, complete with inspiring coastal scenery, seasonal events and food that will delight your taste buds. Whether you want to take advantage of shorter lines at must-see attractions, admire fall colors or simply slip away to an urban oasis or seaside escape before the crisp, sunny days come to a close, we’ve pinpointed 10 can’t-miss European destinations to experience this autumn.

Alongside tulips and windmills, the global image of Amsterdam is one of a city entwined with water. Since its development in the 17th century, Amsterdams Canal Ring has grown to be one of the worlds most unique urban landscapes. And celebrating its 400th birthday in 2013, the Canal Ring not only remains a historic and beautiful water network through the city, but a stunning backdrop for fantastic cultural and sporting events throughout the year.

With shrinking crowds and enticing bargains following the popular summer travel season and prime tulip-viewing in April and May, Amsterdam is an appealing autumn vacation choice for penny-wise travelers. In September and October, you can still enjoy comfortable daytime temperatures in the 50s and 60s, yielding ideal conditions for whizzing around canals lined by buildings on bike and exploring world-class art at the Rijksmuseum and the Van Gogh Museum. Even better for bargain-hunters, Google Flights currently shows round-trip routes from District of Columbia area hubs for $510 in October. You can score significant discounts on flights during the early shoulder season, which is “the sweet spot between the crowds of the high season and the unappealing weather of the low season,” explains Christie Hudson, Expedia’s U.S. communications manager.

Plaza de Espana was built in 1928 for the Ibero-American Exposition of 1929. It is a landmark example of the Renaissance Revival style in Spanish architecture.

With pleasant temperatures in the 60s and 70s, fall is the perfect time to escape to Seville, says Geena Marcelia, associate manager of brand marketing and travel editor at Hotwire. Explore storied neighborhoods and ornate Gothic architecture, while breaking for a leisurely afternoon siesta. Maximize your visit by roaming along the city’s cobblestone streets and checking out the Museum of Flamenco Dance and the Real Alcázar Moorish-influenced palace and gardens, where you’ll find a melding of baroque, Gothic and other cultural influences. Happily, with Google Flights currently listing round-trip flights for under $800 in September and hotel deal site goSeek.com showing four-star hotels available for $100 per night from Sept. 15-18, it’s easy to stay on budget.

Fisherman’s Bastion is a terrace in neo – Gothic and neo – Romanesque style situated on the Buda bank of the Danube, on the Castle hill in Budapest, around Matthias Church. It was designed and built between 1895 and 1902 on the plans of Frigyes Schulek. Between 1947 – 48, the son of Frigyes Schulek, Janos Schulek, conducted the other restoration project after its near destruction during World War II.

Budapest is an off-the-beaten-path European vacation destination, but it’s worth the trip, particularly in fall, when you can seize upon wallet-friendly hotel rates, seasonal events and world-class art and architecture without needing a heavy coat. In September and October, the crowds have dissipated and daytime temperatures hover in the 60s and 70s, making the conditions comfortable for exploring attractions around Castle Hill, such as Fisherman’s Bastion and the Hungarian National Gallery. Google Flights shows round-trip flights from District of Columbia area hubs for around $600 in September and round-trip flights for under $640 from Chicago hubs for the same period. Even better, on Sept. 7, you can join grape-seekers at the Budapest International Wine Festival, Marcelia adds.

The City of Light offers a certain je ne sais quoi year-round, but in autumn you can explore the Arc de Triomphe and the Musée d’Orsay without swarms of tourists at your side and admire crimson and yellow hues at Luxembourg Gardens. Rather than touristy crowds and long wait times, expect regular cafes to be open and lines at top landmarks like the Eiffel Tower to dwindle, Marcelia says. Even better, goSeek.com shows four-star hotels starting at around $130 per night from Sept. 15-18. Plus, affordable round-trip routes with low-cost carriers abound. Google Flights lists round-trip itineraries from New York City hubs starting at $380 in September and $440 from Los Angeles International Airport.

If you’re a beer lover hoping to sample legendary brews and attend bona fide festivals like Oktoberfest, Munich is an affordable and festive vacation choice. During the two-week festival, from Sept. 16 to Oct. 3, you can celebrate Bavarian culture and cuisine and delight in amusement park rides, Marcelia says. And when you’re not celebrating the country’s brewing history, you can explore can’t-miss attractions such as Residenz Royal Palace and the English Garden without bursting your budget. What’s more, Google Flights shows round-trip flights from Boston’s Logan International Airport for under $700 in September and round-trip routes for under $900 from Chicago hubs.

Prague, with its statue-flanked bridges, fairy-tale-like castle and iconic architectural gems, from the Dancing House to the Astronomical Clock, is even more irresistible in autumn, when intense crimson and orange hues drape the city streets. While temperatures can dip into the 40s and 50s in September and October, you’ll be rewarded with fewer tourists, brilliant foliage and plenty of seasonal festivals. Plus, you can snag hotels for under $100 a night this time of year, Marcelia says. She also highlights fun fall events like the Strings of Autumn Festival, from Oct. 20 to Nov. 9, which features live music, including classical and jazz genres. When you need a break from sightseeing, head to Petrin Hill for spectacular city views.

Edinburgh’s charming cobblestone streets, storybook castle and spectacular views from Arthur’s Seat draws visitors during all seasons, but if you don’t mind brisk temperatures in the 40s and 50s, September and October offer an enticing time to take in striking colors. And with goSeek.com showing four-star accommodations starting at under $100 per night from Sept. 15-18 and under $115 from Oct. 6-9, planning an autumn trip is easy on the pocketbook. What’s more, Google Flights shows round-trip October itineraries to Edinburgh starting at $400 from Miami International Airport and $480 round-trip routes from Boston’s Logan International Airport.

With whitewashed villas and charming seaside villages no longer crowded with tourists, September and October are ideal months to experience Santorini’s sun, splendor and spectacular sunsets. Temperatures fall in the 70- and 80-degree range, creating perfect conditions for sunbathing, swimming and exploring. Plus, as crowds start to drop, so do hotel and flight prices. GoSeek.com shows four-star accommodations starting at $140 per night from Sept. 29-Oct. 2. What’s more, Google Flights lists round-trip routes from New York City hubs for $900 in September and round-trip routes from LAX for under $750 in October.

The Duomo of Florence at Sunset – Italy

Arrive in Florence in early October and you can enjoy thinner tourist crowds, daily highs in the 70s and must-sees such as the iconic Duomo and the Uffizi, without exceeding your budget or jockeying for your spot with fellow spectators. Stroll along the Ponte Vecchio, admire Michelangelo’s “David” and splurge on a few memorable meals when you want a break from museum-hopping and church strolling. Best of all, you won’t have to fret about pinching pennies: Google Flights shows round-trip itineraries from New York City hubs starting at $815 in October and under $900 from Miami International Airport for the same time frame. Plus, goSeek.com currently lists nightly rates at three-star hotels for under $100 from Oct. 6-9. 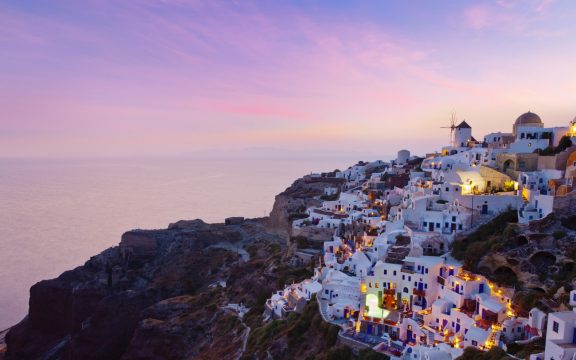