Did you know anything about traditional Christmas dish in Caribbean Islands?

Traditionally, Pepper Pot is prepared at Christmas as it is real Guyanese national dish. ‘Cassareep’, a black liquid of cassava root, gives black color and some spices give nice flavor. Meat is well simmerd with it. Don’t confuse Guyanese Pepperpot with the Pepperpot of Jamaica and other Caribbean islands. It won’t be Guyanese one unless it is made with cassareep. In traditional way of serving this would be with Cassava bread. 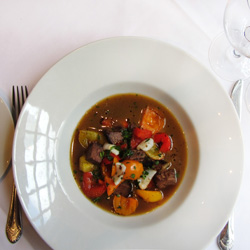