A pair of buildings colloquially known as “Marilyn Monroe” has won the prize for best new skyscraper completed in 2012.

The curvy, twisting buildings, officially known as Absolute World Towers, and located in Mississauga, Ontario, were designed by Beijing-based MAD architects and Toronto-based Burka Architects. “The way the two structures twist organically by up to eight degrees per floor is not just a superb technical achievement, but also a refreshing change to the set forms of high-rise routine,” said an international panel of expert judges when explaining their decision. The prize, given by building data company Emporis of Hamburg, Germany, “rewards skyscrapers for excellence in their aesthetic and functional design,” the company said.

It’s the thirteenth time the prize has been awarded. 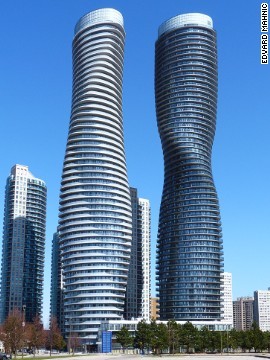