On Board Queen Victoria to Norway and Iceland!

This is Captain Peter Philpott returning with my monthly blog for The World’s Greatest Vacations and this month I’m delighted to be able to write about the very first cruise I have ever taken as a genuine guest on board ship, since my retirement as Captain of Cunard Lines’ “Queen Mary 2” last September! 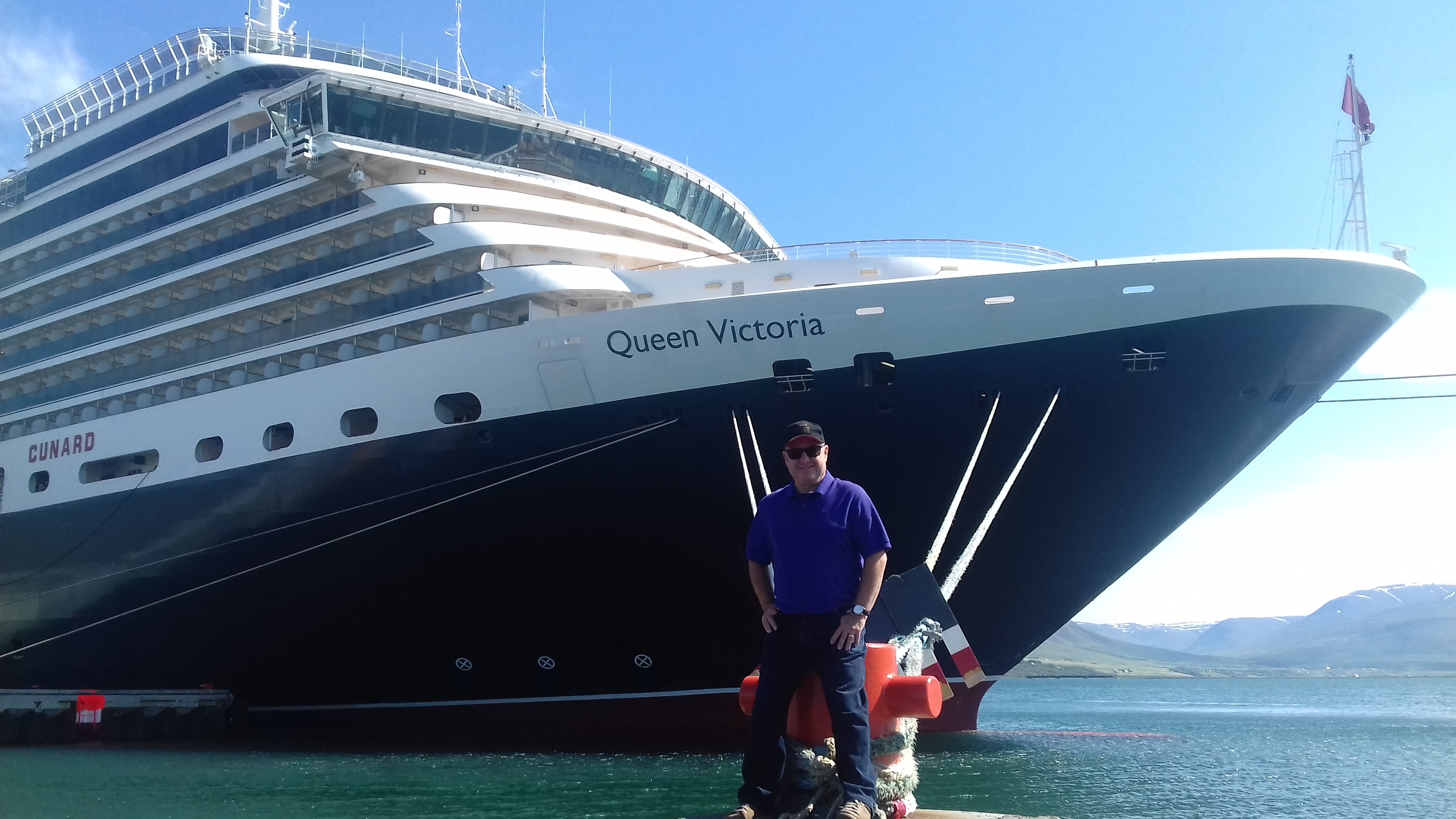 This time I was on board QM2’s slightly smaller “sister ship” Queen Victoria, but I was going back to a ship I was very familiar with indeed, having been her Captain for five full years from 2012 until 2017!

Queen Victoria is a truly elegant ship, very much in the traditional Cunard style with many unique features, combined seamlessly with outstanding hospitality provided by her 981 crew members who look after just 2000 guests, which is an impressive staff to guest ratio. Furthermore, Queen Victoria’s appeal was elevated even further in 2017 during a refit and refurbishment at which I was Captain and which saw an expanded aft sun deck installed, along with a new and beautiful Britannia Club dining room and much enhanced Chart Room Lounge and Winter Gardens Lounge.

My wife and I boarded Queen Victoria in Southampton, England for a 14 night voyage which would take us to Norway, Iceland and the small Scottish port of Stornoway in the Hebridean Islands, which lie to the West of Scotland.

How lovely to be on the receiving end of the famous Cunard hospitality, instead of helping to provide it as I had done for many years before my retirement! 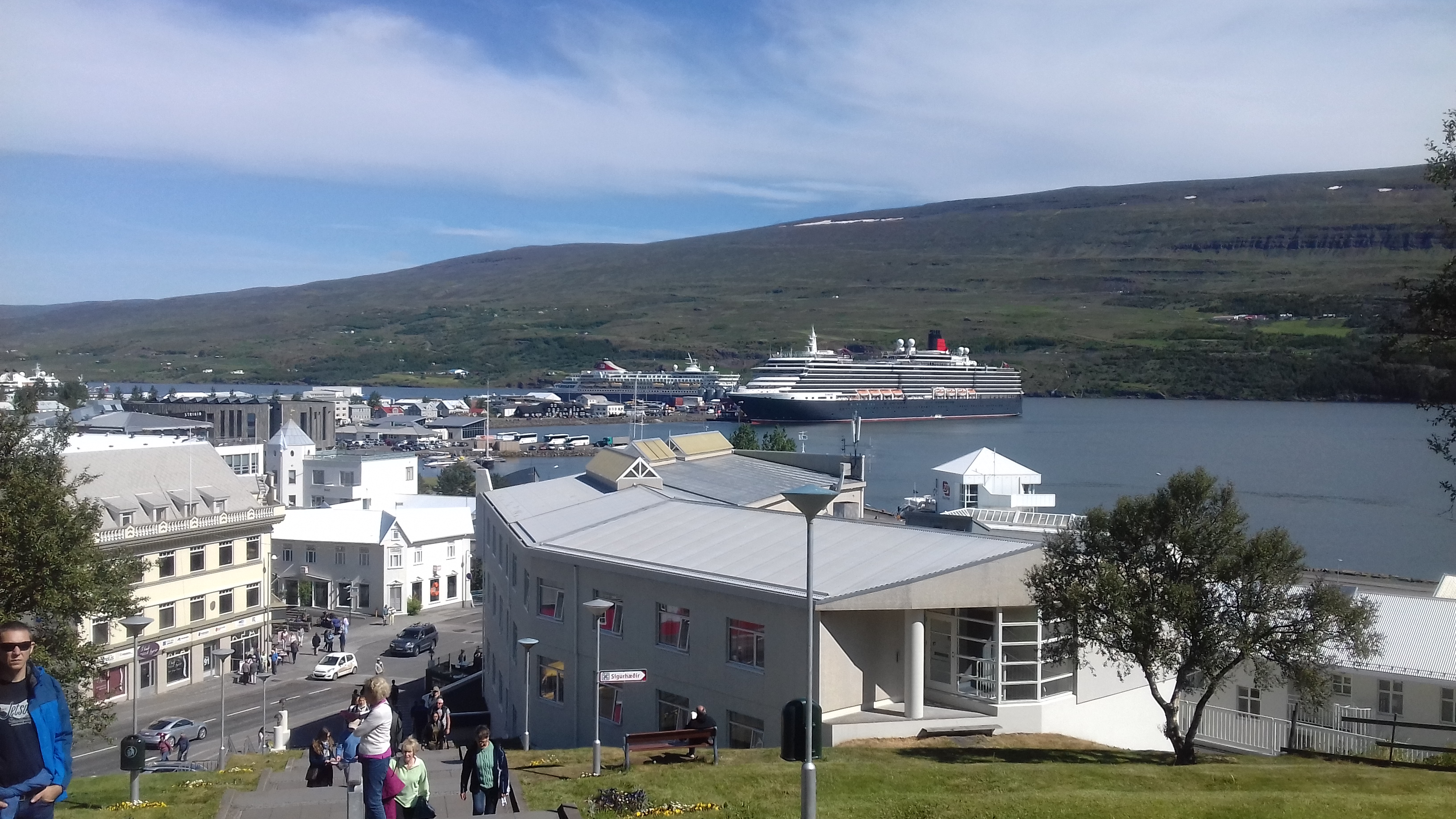 We first visited Olden and Alesund in Norway – Olden lies at the far end of Nordfjord and is a small but quaint little town. However, getting there on the ship is a large part of the experience, as the scenic cruising in and out of Nordfjord is simply stunning, as are all of the Norwegian Fjords.

Thence to Alesund, which is a town on the west coast of Norway at the entrance to the Geirangerfjord. We made the steep climb up approximately 490 steps to the lookout point above the town to get some great views and photos to go with it!

From there, just one full day at sea saw us make the crossing of that part of the Atlantic Ocean to the unique country of Iceland, at which we stopped at Akureyri, Isafjordur and the capital city of Reykjavik. Here, in early July, it was still perfectly daylight well beyond midnight and there was hardly any real darkness during the night at all..!

Iceland is an amazing country of volcanic lava fields, steaming geysers and modern towns, the buildings and dwellings of which are heated for free by clever use of the seemingly never ending natural supplies of steam which constantly emanates from the ground! We took an off-road tour in four wheel drive vehicles with huge balloon tires to climb hills and to see gushing plumes of steam hissing out from the almost lunar-like landscape. Apparently in parts of Iceland there can be more than one hundred small earth tremors per day! 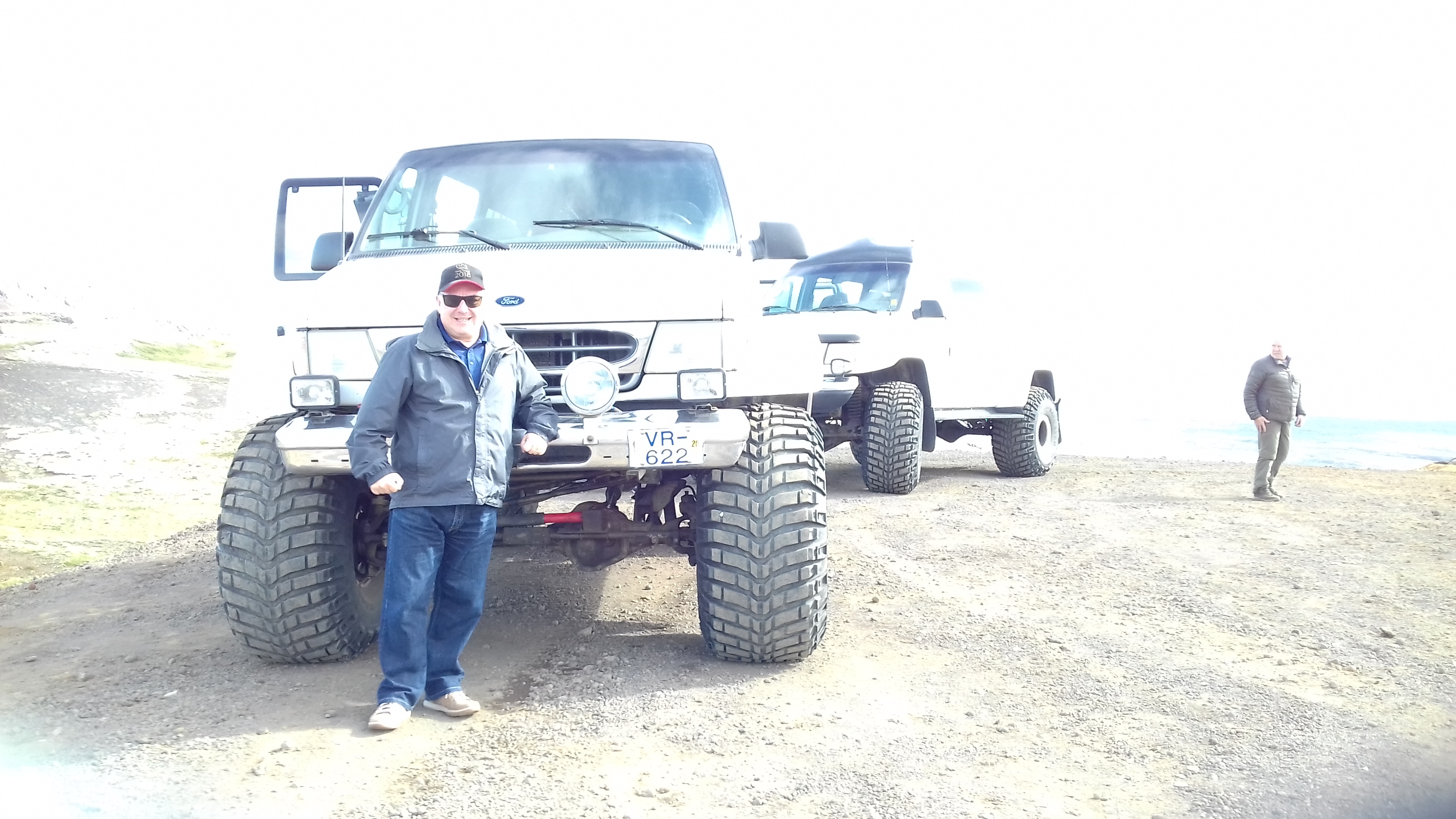 Next stop was at Stornoway, the main town in the Scottish Western Isles and the capital of Lewis and Harris. What a lovely island to explore the Isle of Lewis is, with typical and imposing rocky Scottish scenery and much history and tradition. To cap it all, a troupe of traditional Scottish dancers complete with a bagpipe player came on board Queen Victoria in the afternoon to perform in the Queen’s Room Ballroom for all guests. How lovely!

From Stornoway it was back to Southampton to disembark, but as the old saying from Cunard Liners of the past goes, “half the fun is getting there” and it surely was. We were wined and dined in spectacular style, with impeccable on board service. We enjoyed Broadway quality production shows from the Royal Court Theatre Company singers and dancers; top comedians and acrobatic shows on other nights; exquisite cocktails and piano music in the Commodore Club lounge before dinner; ballroom dancing in the Queen’s Room every evening until late and long walks around the Promenade Deck to burn off some of those calories!!

And yes, many of the crew members did recognise me which was very nice, but in answer to their questions of whether I was to return there once again as Captain, well I had to tell them unfortunately not, as I had taken an early retirement after 40 years at sea and so far it was suiting me very well …!!

If this story catches your imagination such that you feel you might well enjoy a voyage on one of the Cunard vessels, then don’t hesitate to browse and book one through the webpages of The World’s Greatest Vacations – I’m certain you won’t regret it!

My next adventure will be on a much smaller, but equally stunning vessel named “Paul Gauguin” which cruises out of the beautiful island of Tahiti in the South Pacific and my wife and I are delighted to be travelling on that ship in August and I very much look forward to recounting our experiences there too!

Until then, safe travels and Bon Voyage! 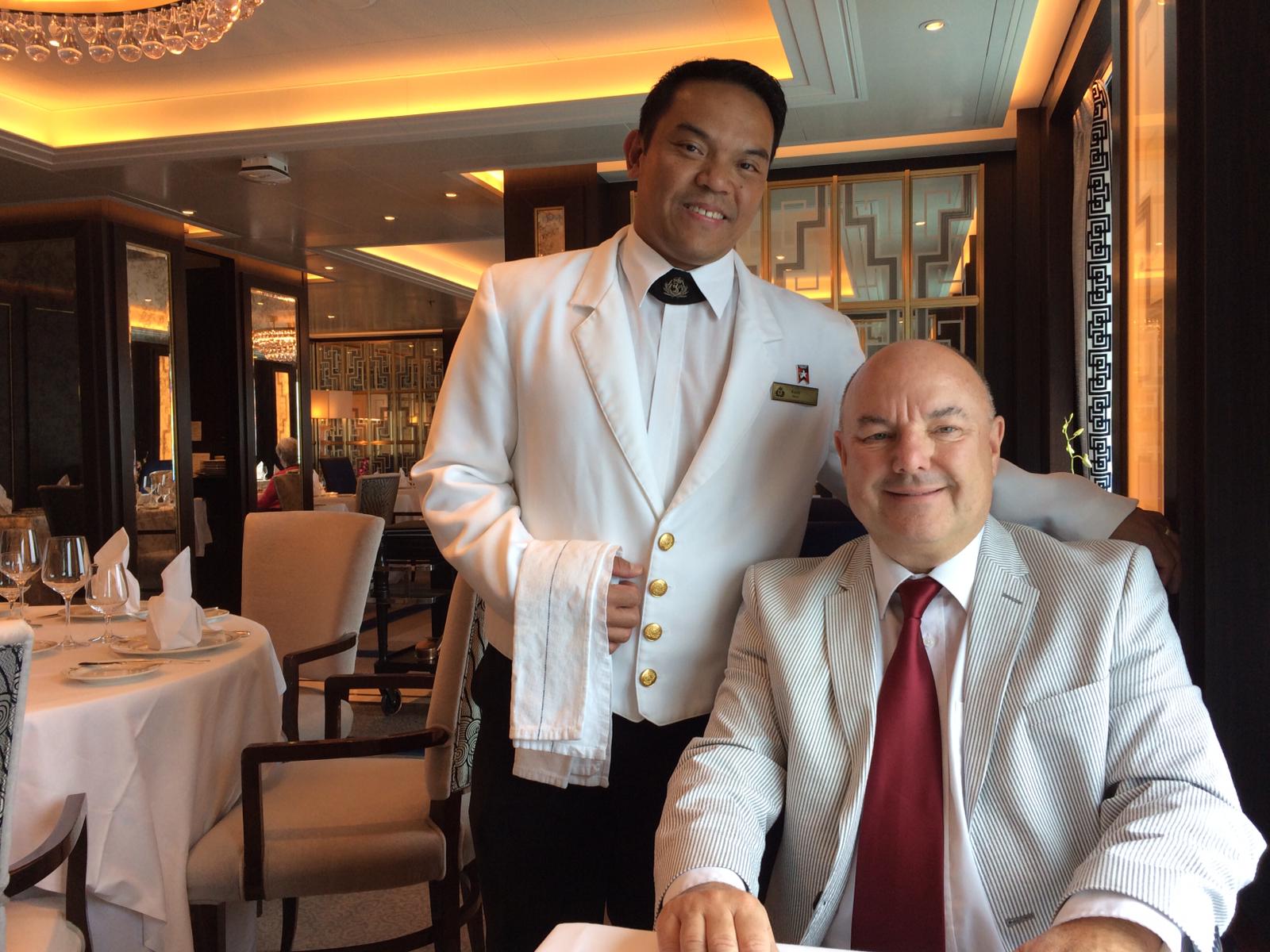 PS: By the way, my wife and I were beautifully served at every dinner throughout the two weeks by Waiter Randy from the Philippines. I have included a photo of him standing with me at our dinner table. He proudly told me that he had been one of the last ever “Captain’s Tigers” on board the famous Queen Elizabeth 2, more commonly known as the QE2. What is a “Captain’s Tiger”??!! Well it was the name given to the Captain’s personal steward who looked after his every need, both to do with his duties on the Bridge and to do with his many social duties too. Did I have a Captain’s Tiger?! I am afraid not, as they were, like many great things, phased out when the QE2 retired in 2008, after which we had a Captain’s Steward, who also looked after several other Senior Officers! 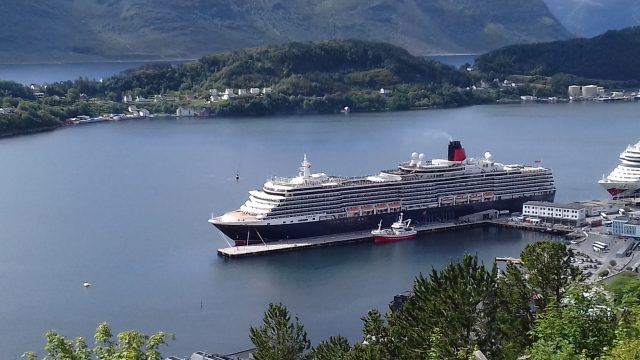