Cunard kicks off its 175 celebrations in Southampton 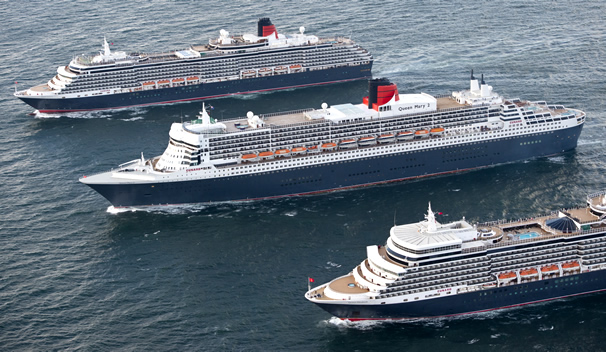 Cunard’s celebrations for its 175 year anniversary will commence in the UK with the arrival home on Sunday 3 May of the Cunard fleet from their World Cruises. This gathering of Queen Mary 2,Queen Elizabeth and Queen Victoria at Cunard’s homeport will initiate a momentous season of festivities for the company, beginning with a ‘Thank You , Southampton’ event later the same day.

For almost 100 years Cunard ships have called Southampton ‘home’ and during that time many spectacular events, royal visits and other special occasions have been shared by the company and the city. To celebrate the beginning of the UK festivities in this milestone year, Cunard’s flagship liner Queen Mary 2 will take centre stage in the afternoon of Sunday 3 May, as she leads her sister ships Queen Elizabeth and Queen Victoria on a triumphant procession down Southampton Water and into the River Solent, in homage to the city of Southampton.

“We’re excited to start our UK 175 festivities in Southampton and share the celebrations with the city and beyond in this magnificent landmark year. For the very first time Queen Mary 2 will lead a daylight parade of Cunard’s Three Queens down Southampton Water and into the Solent. Together with the city, the company has shared so many fantastic memories, and I hope residents and Cunard enthusiasts from far and wide will take advantage of this magnificent sight and enjoy the spectacle of seeing our three Queens manoeuvring together so close to  Southampton.”

The sailaway procession will start to get underway at 4.30pm as Queen Mary 2 moves into position to lead the fleet out of Southampton Docks, to be followed by Queen Elizabeth andQueen Victoria. By around 5.20pm the three ships will have passed Dock Head and will be sailing south, led by flagship Queen Mary 2, and reaching Calshot at about 5.50pm.

After zig-zagging through the Brambles turn near Cowes, the fleet will then separate before coming back together again, with Queen Mary 2 easing south and Queen Elizabeth and Queen Victoria taking a more northerly route and first drawing level with Queen Mary 2 and then overtaking her until at Lee on Solent the fleet forms up again but with the lead given now to Queen Elizabeth, followed by Queen Victoria and then Queen Mary 2. At around 6.45pm Queen Elizabeth, the youngest of the fleet, will lead her sisters past Ryde on the Isle of Wight before reaching the Nab Tower on its easternmost point at 7.30pm.

At this point, the ships will break formation and sail off into the sunset on their own itineraries.Queen Elizabeth will continue east towards Hamburg, Queen Victoria will turn south for St Peter Port in Guernsey and Queen Mary 2 will head west across the Atlantic to New York.

Help celebrate our 175 year by sharing your favourite pictures from the day at @CunardLine using #Cunard175 and #3Queens.