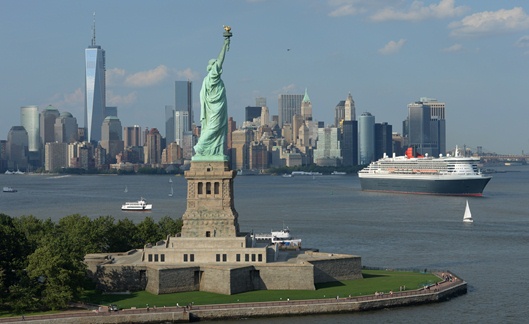 “It is indeed a high compliment for Cunard and Queen Mary 2 to be recognized year after year by Travel Weekly’s readers as the best luxury ship in the world,” said Richard Meadows, president of Cunard Line North America. “We are especially thrilled for Queen Mary 2, as it is a wonderful way to conclude her 10th anniversary year in 2014.”

Cunard Line’s iconic Transatlantic Crossing has appealed to a broad range of sophisticated travellers with a love of glamour, elegance and tradition for nearly 175 years. Each Crossing aboard Queen Mary 2 features a series of Royal Nights themed balls on the largest dance floor at sea in the Queens Room, and the Royal Court Theatre presents West End-style musical revues and guest performers.

To celebrate Cunard’s 175th Anniversary in 2015 and the storied Grills experience, the company is offering The Grills Inclusive Package featuring an array of complimentary amenities, elevating what is already an unsurpassed level of elegance at sea. The Grills Inclusive Package is available from 23 December 2014 to 28 February 2015. Grills passengers will enjoy a number of complimentary services and amenities such as a wine package, Internet minutes, a keepsake photo, a specialty coffee card, gratuities and an alternative dining credit. Britannia guests will also have something to celebrate with a 175th Anniversary Package offering complimentary balcony upgrades.

“Travel is on course to become the largest industry in the world, with more than 1 billion people crossing international borders every year.” said Arnie Weissmann, editor in chief of Travel Weekly. “Somebody has to counsel, transport, entertain, enlighten and house all these travelers, and the Readers Choice Awards winners are the very best at doing just that.”

For more information about Queen Mary 2 and to book a voyage, contact your Travel Consultant, call Cunard toll-free at 1-800-728-6273, or visit www.cunard.com