Rare facsimile of Salisbury Magna Carta to be carried on board. Local Salisbury figure to give Insight lectures 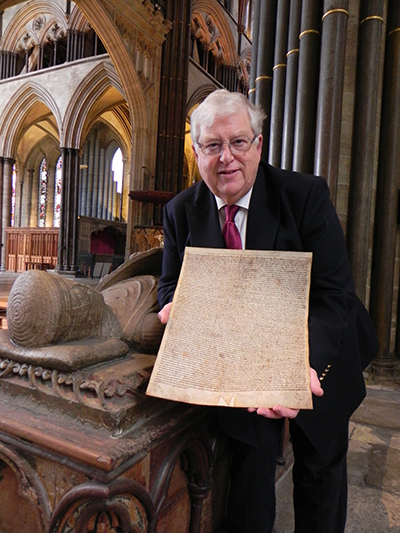 A facsimile of one of the rarest and arguably the most important documents in English history, Magna Carta, will be going on display on board Cunard’s flagship liner, Queen Mary 2 and sister ship Queen Victoria between May and September 2015, as the ‘Great Charter’ sealed by King John in 1215 celebrates its 800th anniversary year.

As the shipping line continues to celebrate its 175th anniversary year, Salisbury Cathedral will be lending a rare facsimile of its Magna Carta, one of only four of the original 1215 documents in existence, to Cunard. The facsimile will be displayed in the Grand Lobby of Queen Mary 2 from early May until September 2015, with a 6 night sojourn aboard Queen Victoria in late May.

Cunard and the Magna Carta share some interesting history. During WW2, the Lincoln Magna Carta, one of the four originals, was moved to Washington DC for safe-keeping. In January 1946 it began its journey home, first to New York and then on board Queen Elizabeth for the voyage to Southampton. The ship’s Captain, Commodore Sir James Bisset, kept the metal box containing the precious document in the safest place he could think of for the duration of the crossing – under his bed!

Robert Key, Chairman of the Salisbury Cathedral 2015 Magna Carta 800th Anniversary Board, and a Member of the National Magna Carta 800th Committee will be escorting the copy of Salisbury’s Magna Carta during crossings aboard Queen Mary 2 on 10-17 May 2015 and 4-11 September 2015, and aboard Queen Victoria’s cruise on 22-28 May 2015.
Robert will hold two talks on each voyage about the legacy of the Magna Carta, and the profound effect it had in shaping the world as we know it today.
The Magna Carta was a series of written promises between the king and his subjects that he, the king, would govern England and deal with its people according to the customs of feudal law. The Magna Carta was an attempt by the barons to stop a king – in this case John – abusing his power and causing suffering to the people of England.

Robert explains to significance of partnership with the Magna Carta and Cunard in their joint anniversary year:

“I, and Salisbury Cathedral, are delighted to be working with Cunard as we celebrate the Magna Carta’s 800th anniversary by loaning a very rare facsimile of the document. The impact of the Magna Carta was not only felt ashore, but in these lectures we have a golden opportunity to explain and explore those fundamental freedoms that give Cunard ships the right to sail the seven seas – rights that we won 800 years ago and for which people the world over are still prepared to fight and to die.”

Angus Struthers, Cunard’s Marketing Director for Cunard is delighted to welcome on board the Magna Carta facsimile to Queen Mary 2 and Queen Victoria:

“We are really pleased to welcome the Magna Carta, a document of such historical significance, to both our flagship liner, Queen Mary 2 and Queen Victoria during our 175th anniversary year. I know with Robert’s expertise, our guests will be given exceptional insight into how the Magna Carta has enabled us to enjoy the freedoms we still cherish to this day.”

The Magna Carta facsimile will join Queen Mary 2 from 10 May and will stay on board until 11 September 2015. It will be transferred to Queen Victoria for a short period, 26-28 May, part of the ship’s Liverpool Salute sailing 22-28 May 2015. On 25 May 2015, all three Queens will sail together into the Liverpool, the spiritual home of Cunard, for the first time.