The 100 day countdown to Cunard’s Three Queens on the Mersey Liverpool Salute begins on Valentine’s Day!

The 100 day countdown to the most spectacular gathering of the Cunard fleet officially gets underway on Valentine’s Day, Saturday 14 February. Just 100 days later, on 25 May, up to one million spectators are expected to gather as Cunard’s three Queens perform a magnificent salute to its ‘spiritual home’ of Liverpool. 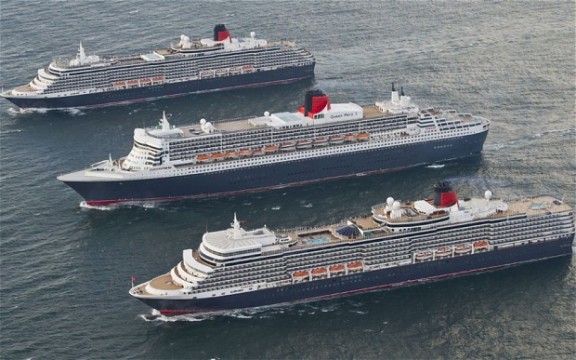 The official 100 day digital countdown clock was unveiled by the Chair of Merseytravel, Councillor Liam Robinson at the Mersey Ferries Pier Head Terminal ready for one of the most romantic days of the year, St. Valentine’s Day. Joining him were loyal Cunarders, 26-year-old Scott Sandison and his 24-year-old fiancée Lauren Hayes from Edinburgh, who in 2007 met as teenagers on board QE2, with Scott proposing on stage six years later in front of hundreds of people on board Cunard’s Queen Victoria.

Unveiling the clock, Councillor Liam Robinson the Chairman of Merseytravel said:
“Cunard’s three Queens spectacular will be a global event hosted by Liverpool. The celebration of Cunard’s 175th anniversary presents a huge opportunity for the city and I am delighted that Merseytravel will play its important part by transporting many of the tens of thousands of spectators who will converge on both sides of the River Mersey to witness the ships salute their spiritual home.

“The Mersey Ferries in particular will have a very important role providing unique vantage points and the vital Tender Service to Queen Victoria when she is at anchor in the Mersey.

“Three Queens, One Magnificent City will be a unique moment in Merseyside maritime history and it is entirely fitting that our world-famous Ferries will be part of it. The Fleet Is Coming – in 100 days!”

On 25 May, Queen Mary 2, Queen Victoria and Queen Elizabeth will arrive in Liverpool to celebrate Cunard’s 175th anniversary year in dramatic fashion. The three Queens will meet on the famous Liverpool waterfront, performing manoeuvres in close formation to create a spectacular one-off event that will draw hundreds of thousands of people to the banks of the Mersey.

Celebrating the countdown to the magnificent event and St. Valentine’s Day, Lauren and Scott were invited to help unveil the clock after Cunard learnt about their love story. After first meeting on board QE2 the couple continued their long distance romance, even though it meant a 350 mile trip with Scott living in Glasgow and Lauren in Cambridge. Six years later the Gold Cunard World Club Members, who now live in Edinburgh, are planning to make their fifth cruise with Cunard their honeymoon.
Lauren said: “We’re both really honoured to be here today. We’ve got a huge emotional connection to Cunard, given our history with the company, and it’s just really special and exciting to be involved in such a big way like this. We’ve always felt part of the family when we’ve been on Cunard ships. For example we’ve both known one of the staff, Jessie Boy, longer than we’ve known each other! He was there when we met on QE2 and when we got engaged on Queen Victoria and hopefully we can arrange for him to be at our wedding!”

On 4 July 1840, Cunard’s first ship, Britannia, left the Mersey and changed the face of ocean travel forever by establishing the first scheduled service across the Atlantic. Queen Mary 2 will return to the cruise terminal on 4 July 2015, 175 years later to the day, to recreate the voyage of that first Cunard ship from Liverpool to Halifax and Boston. Today’s flagship will then continue on New York.

For more information about Cunard’s 175th anniversary crossings please visit www.cunard.co.uk. For those interested in following us on Twitter you can find us at @CunardLine or like our Facebook page www.facebook.com/cunard. Share your favourite memories with #ForeverCunard. May 2015 will see Cunard return to its spiritual home in Liverpool, to celebrate its 175th anniversary. Cunard’s three Queens – Queen Mary 2, Queen Elizabeth and Queen Victoria – will meet on the famous Liverpool waterfront in a spectacular one-off event that will draw tens of thousands of people to the banks of the Mersey. Queen Mary 2 will then return to the cruise terminal on 4th July to recreate the voyage of the first Cunard ship, Britannia, from Liverpool to New York.