Norwegian Escape to feature a series of branded experiences from leaders in dining and beverage, along with Tony Award-winning Broadway Musicals and all-new Supper Club. 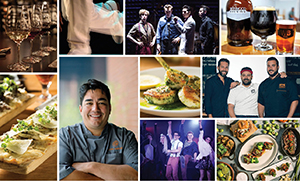 Norwegian Cruise Line has announced a multitude of new partnerships with leaders in the fields of dining, beverage and entertainment to feature innovative branded experiences on board Norwegian Escape. During an exclusive event in New York City, the line revealed that its largest ship ever, Norwegian Escape, will include several new culinary experiences, along with two Tony Award-winning musicals, and a unique Supper Club, when she begins sailing from her homeport of Miami in November 2015.

“With Norwegian Escape, we are transforming culinary experiences at sea and continuing our legacy of innovation that has revolutionised dining in the cruise industry,” said Drew Madsen, Norwegian Cruise Line’s President and Chief Operating Officer. “We are building on our solid foundation of branded partnerships, including Jimmy Buffett’s Margaritaville, and welcoming new ideas and flavours from award-winning chefs. Norwegian also continues to pave the way as a leader in entertainment, as we bring two Tony Award-winning Broadway musicals and a post-modern cabaret direct from Los Angeles to Norwegian Escape.”

New Concepts by Jose Garces
James Beard Award-winning Iron Chef Jose Garces will launch two speciality restaurants on board Norwegian Escape, his first at sea. Jose Garces brings Latin-inspired culinary expertise, ranging from classic Mexican dishes to Cuban specialties. His breadth of culinary expertise along with his passion for cooking made him the perfect choice to lead the signature dining concepts on Norwegian Escape. Bayamo by Jose Garces will highlight Latin dishes with a heavy Cuban-influence in a chic dining room and al fresco on The Waterfront. Dishes will feature the flavours of Latin America with Spanish influences, such as Berenjenas, roasted aubergine with tomato rice and a saffron emulsion; and Bacalao Carbonizado, black cod with a squid ink glaze, saffron, and tomato and chorizo rice, among others.

Sugarcane Mojito Bar, a Norwegian guest favourite, will complete the space and serve as an entry to Bayamo. Guests who wish to have a cocktail before dinner can settle into the tropical setting, enjoy live Latin music, and select from more than 10 different mojitos and rum-based cocktails and can even select a “flight” of mojitos to sample to tantalise their taste buds.

Food Republic
A brand new concept for Norwegian, the Food Republic will be a modern, upscale food emporium from The Pubbelly Restaurant Group featuring global cuisine for sampling and sharing. Guests dining in the Food Republic will experience a culinary journey via small plates, with flavours ranging from Asia to Central Europe and the Mediterranean, all available à la carte.

As some of the hottest restaurateurs in Miami, partners Jose Mendin, Andreas Schreiner and Sergio Navarro, have opened six concepts in the Magic City over the past three years. With a focus on creating unique flavour combinations and precise techniques, Director of Culinary Operations and Founding Partner Jose Mendin has been recognised as a semi-finalist for Best Chef South by the James Beard Foundation for three consecutive years, as well as nominated as People’s Best New Chef by Food & Wine magazine.

Open for lunch through dinner, Food Republic menu highlights include Dates with Chorizo featuring smoked bacon, spicy tomato and goat cheese crema; Japanese Amberjack with lemongrass romesco, charred tomato and hazelnuts; and Black Truffle Braised Short Rib Dumplings, with white corn soy, red shiso leaf, and grana padano. The Food Republic offers guests the freedom and flexibility to choose what they want, when they want it, with convenient iPad ordering. With a simple swipe of their key card, food is prepared to order and brought directly to the guest’s table.

The curated wine list features 35 grape varietals including top selections from Tuscany’s Ornellaia and Michael Mondavi’s own Napa Valley Estate. The Wine Bar offers guests both a sleek indoor tasting room, and 180 degree ocean views at the outdoor wine bar on The Waterfront, with service provided by a Court of Master Sommeliers certified Sommelier.

Carlo’s Bake Shop
While on board, guests will also enjoy delicious treats from Carlo’s Bake Shop by Buddy Valastro, star of TLC’s “Cake Boss” and “Next Great Baker”. The decadent confections that the original Carlo’s bakery is known for, including Carlo’s Bake Shop’s famous cannoli’s, lobster tails, tiramisu, plus a variety of other unique cakes, cupcakes and Italian cookies, will all be available à la carte for guests who wish to indulge their sweet tooth.

New Entertainment Offerings
Continuing with Norwegian’s commitment to excellence in entertainment, Norwegian Escape will feature two Tony Award-winning Broadway musicals headlining in the Escape Theatre that will have guests dancing in the aisles. Winner of the Tony®, Drama Desk, Outer Critics Circle and Astaire Awards for Best Choreography, After Midnight, which recently completed its run on Broadway, is the smash-hit musical that combines the big-band songs of Duke Ellington, a roof-raising onstage jazz band, and the best dancing from Broadway. A cast of megawatt singers, dancers and tappers will bring Harlem’s Cotton Club to life in a never-before-seen phenomenon at sea.

Also showing in the Escape Theatre following a successful run on Broadway and currently touring nationally as well as performing in Las Vegas, Million Dollar Quartet is the smash-hit musical inspired by the famed recording session that brought together rock ‘n’ roll icons Elvis Presley, Johnny Cash, Jerry Lee Lewis and Carl Perkins for the first and only time. On 4 December 1956, these four young musicians gathered at Sun Records in Memphis for what would be one of the greatest jam sessions ever. Million Dollar Quartet brings that legendary night to life, featuring a score of rock hits including “Blue Suede Shoes”, “Fever”, “Great Balls of Fire”, “Walk the Line”, and more. This thrilling musical will bring guests inside the recording studio with four major talents who came together as a red-hot rock ‘n’ roll band for one unforgettable night.

In a new concept exclusive to Norwegian Escape, the Supper Club has been re-imagined for an unforgettable dinner and show. For The Record is a critically acclaimed Hollywood night that celebrates classic soundtracks of motion picture masters in a one-of-a kind 360° post-modern cabaret. Guests will spend an evening with a brain, an athlete, a basket case, a princess and a criminal in this mashed-up retrospective of the John Hughes’ coming of age 1980’s teen films. The audience will laugh, cry, stomp their feet and relive the classic new wave sounds from Sixteen Candles, The Breakfast Club, Weird Science, Pretty In Pink and Ferris Bueller’s Day Off.

Expanding a successful run that began on Norwegian Getaway, Headliners Comedy Club will offer up top comedians through the line’s expanded partnership with Levity Entertainment Group, the world’s largest producer of live comedy. Levity employs over 300 artists each week, including some of the biggest names in US comedy, including Daniel Tosh, Amy Shumer and Jeff Dunham, who is currently the most successful touring comedian worldwide.

Norwegian Escape’s dining and entertainment will include outposts of several popular land-based outlets, including the first-ever floating Jimmy Buffett’s Margaritaville restaurant and Miami’s oldest and most legendary bar, Tobacco Road. Norwegian Escape will also feature the 5 O’Clock Somewhere Bar, a music venue and outdoor bar on The Waterfront that will feature live nightly performances where guests can enjoy the sounds of the tropics.

The ship will feature the largest ropes course at sea, a three-story multiplex of heart-pounding challenges complete with two planks and five Sky Rails, zip tracks that allow guests to soar through the air. Norwegian Escape’s Aqua Park will be the largest at sea and includes a new Aqua Racer slide, while the expansive sports complex boasts a Teenage Mutant Ninja Turtle miniature golf course. Adding to the family fun, Norwegian Escape will also feature an expanded Kids’ Aqua Park; entertainment from Nickelodeon, the number-one entertainment brand for kids; along with the line’s first dedicated nursery for young cruisers two and under.

The Mandara Spa will transport guests to a deep state of relaxation and will feature the line’s first snow room and the largest Thermal Suite at sea, with 17 heated loungers, hydro-therapy pool, whirlpools, steam room, dry sauna, sanarium and salt room. In addition to the luxurious spa, adults will have two private lounge spaces to enjoy on board at Vibe Beach Club and Spice H2O, which will feature an all-new grotto area for guests to cool off after a day of sunbathing.

Accommodation includes the company’s signature luxury ship–within-a-ship complex: The Haven by Norwegian; along with Studios, designed and priced for solo travellers; and many options for families, multi-generational groups, spa enthusiasts and more.