A Royal Princess is Coming to Los Angeles

In 200 Days, Princess Cruises’ Royal Princess Will Make Her West Coast Debut in March 2019 and Begin Sailings from the Port of Los Angeles.

Princess Cruises started with a single ship sailing out of the Port of Los Angeles to Mexico in 1965. In 200 days, the cruise line welcomes Royal Princess, one of its new large ships recognized around the world for having been officially named in 2013 by Her Royal Highness, Catherine, The Duchess of Cambridge. Royal Princess will arrive with great fanfare to the City of Angels and embark on her maiden voyage to the Mexican Riviera on March 23, 2019.

“The anticipation of the arrival of Royal Princess is growing as we officially announce the 200-day countdown that will welcome one of our newest, most elegant ships in our global fleet to the U.S. west coast and long-term home at the Port of Los Angeles,” said Jan Swartz, Princess Cruises president. “Now guests have the opportunity to experience this exquisite floating resort, our world-class service and best-in-class dining to sought-after destinations like the Mexican Riviera, California Coast, Hawaii and Alaska.”

Award-winning features aboard Royal Princess include the large atrium or “Piazza,” offering enticing entertainment and culinary delights; the overwater SeaWalk – a 60-foot-long glass walkway standing 128 feet above the ocean; an expansive Lotus Spa with The Enclave, home to Princess’ largest-ever thermal suite and a dramatic hydro-therapy pool with a cascading rain shower and therapeutic air jets as well as an array of services and secluded couples treatment rooms; a live television studio; adults-only Retreat Pool and Sanctuary; and newly re-branded Camp Discovery youth center.

Before Royal Princess makes her West Coast debut, the ship will undergo a “wet dock” renovation and receive several new features, including new equipment in the Lotus Spa and fitness center as well as the arrival of the cruise line’s recognized “Princess Luxury Bed,” created in collaboration with board-certified Sleep Doctor Michael Breus and HGTV Designer Candice Olson to all cabins.

Guests sailing aboard Royal Princess can also marvel at the “Royal” display case, featuring memorabilia from the naming ceremony with The Duchess of Cambridge, including the scissors and rope she used to officially send the ceremonial bottle of Champagne smashing against the ship’s hull, a replica of the Champagne bottle, several photos and even a copy of the Dalmatian-print dress she wore by British designer Hobbs.

From Los Angeles, Royal Princess will sail up the Pacific Coast on a seven-day Coastal voyage departing May 4, 2019 to Vancouver to begin her maiden voyages to bucket-list destination Alaska.

The Alaska season begins on May 11, 2019 and Royal Princess will offer 18 “Voyage of the Glaciers,” seven-day cruises, sailing between Vancouver and Anchorage (Whittier) with port stops in Ketchikan, Skagway and Juneau with scenic cruising in Glacier Bay National Park, plus an additional glacier viewing experience at either Hubbard Glacier or College Fjord. Guests can also spend time in the interior of Alaska with a variety of cruisetour offerings, with stays at Princess Wilderness Lodges and visit Denali National Park. In 2019, Princess Cruises celebrates 50 years of cruising in Alaska and takes more guests to the Great Land than any other cruise line.

Royal Princess ends her 2019/2020 season with a seven-day Pacific Wine Country cruise from Los Angeles to Vancouverdeparting on May 9, 2020. 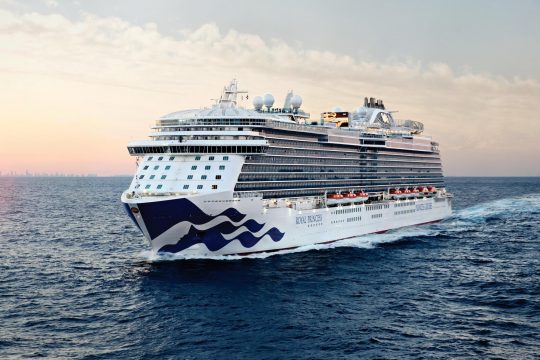