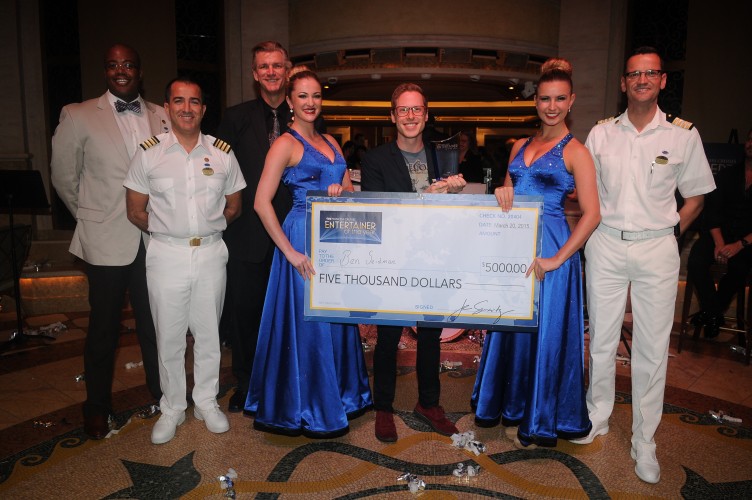 Guests aboard Crown Princess have voted and selected Comedic Magician Ben Seidman as Princess Cruises Entertainer of the Year. Four finalists were selected from the hundreds of talented performers – comedians, magicians, vocalists, tribute bands and novelty performers – which elate guests on Princess’ stages each year. These top artists performed to enthusiastic audiences during the cruise who then cast their ballot to select the winner.

Wisconsin native and Los Angeles resident Seidman is the only person in history to be named the Resident Magician at Mandalay Bay Resort & Casino in Las Vegas and currently stars in Magic Outlaws on Travel Channel. His energetic and playful performances combine stand-up comedy and world-renowned sleight-of-hand.

Guests aboard the March 14 Crown Princess Mexico cruise enjoyed live performances from each finalist. The finalists were determined by the Princess Cruises entertainment department based on guest surveys and onboard audience response. Along with Seidman the finalists included Vocalist Lovena Fox, Comedian Steve Caouette, and violinist and entertainer Christopher Watkins. Seidman was announced as the winner on the final night of the cruise at a celebratory event in Princess’ signature venue, The Piazza.

“Congratulations to Ben Seidman for being chosen as Princess Cruises Entertainer of the Year,” said Adrian Fischer, vice president, entertainment experience, Princess Cruises. “We were so proud to showcase the immense talents of all our finalists to our guests, who were thoroughly riveted by their dynamic performances and certainly had a difficult time choosing among such charismatic entertainers.”

This marks the line’s fourth annual Entertainer of the Year program, which was created to recognize the high caliber and diversity of guest entertainers that perform on each Princess cruise.

As the new holder of the line’s “Entertainer of the Year” title, Seidman also received a cash prize of $5,000.

Additional information about Princess Cruises is available through a professional travel consultant, by calling 1-800-PRINCESS, or by visiting the company’s website at www.princess.com.