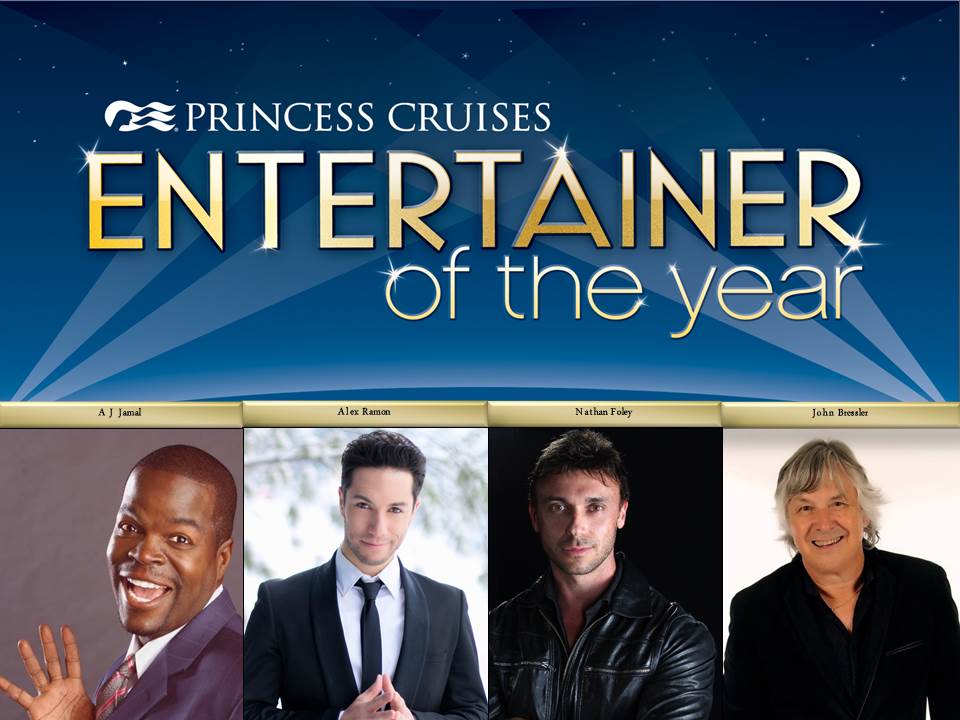 Princess Cruises will soon crown the top guest entertainer for 2015 during the cruise line’s fifth annual Entertainer of the Year competition. Four talented finalists have been carefully chosen from the vast array of onboard performers — including vocalists, comedians, magicians, tribute bands and other specialty acts — who delight guests each year, and will compete for the title during Princess’ upcoming Entertainer of the Year cruise.

Guests aboard the March 6, 2016 Caribbean Princess cruise to the Western Caribbean will be able to cast their ballot for their favorite performer after viewing several live performances from each act during the cruise vacation.

The four nominees for the title of “Entertainer of the Year” are:

A.J. Jamal — Comedian A.J. Jamal, the self-proclaimed comic “King of Clean”, is best known for his appearances on The Tonight Show with Jay Leno, HBO’s Comic Relief, Showtime at the Apollo and the television series Comic Justice where he received an ACE Award nomination for hosting the show.  A.J. is a volcano of energy, touting a sharp wit and clean style that the world is sure to enjoy.

Alex Ramon — Magician Alex Ramon is the recipient of the Christopher Illusionist Award, one of only 20 magicians in history to receive this recognition.  He has previously acted as the “Magical Zingmaster” for Ringling Bros. and Barnum & Bailey Circus and has also toured the globe as a star of Disney Live. Alex created a piece of magic for Taylor Swift, a performance featured at the American Music Awards presentation.

Nathan Foley — Singer, dancer and musician Nathan Foley hails from Sydney, Australia. With 23 years of stage and television experience as a singer and presenter on the Australia hit show HI-5 and the 2015 series I Will Survive.  Foley is the recipient of several awards, including three Logies (Emmy equivalent), five Arias (AMA equivalent) and a Helpmann Award (Tony equivalent). As a soloist, Nathan received the MO Award, A.C.E. Award for Best Young Entertainer and the “Variety Humanitarian Award” for Best Young Artist of the Year.

John Bressler — Musician John Bressler is a multi-talented piano player and keyboardist known for his exuberant stage presence. His performances feature the talent, passion, wit, ridiculous and a genuine likeability, all making his show a must see.

“For a fifth year in a row, we are proud to introduce the incredible talent found in the finalists of our Entertainer of the Year competition,” said Adrian Fischer, Princess Cruises vice president, entertainment experience. “With the caliber of this year’s contestants, it will be difficult to select just one winner. I’m thrilled our guests will be the ones to cast their vote and choose 2015’s best onboard act.”

The finalists have been determined by the Princess Cruises entertainment department based on guest surveys and onboard audience response.

The winner, who will hold the title of “2015 Princess Cruises Entertainer of the Year,” will be announced on the final evening of the cruise at a celebratory event in the Piazza and will receive a $5,000 cash prize.

The fifth annual Entertainer of the Year voyage will depart on March 6, 2016 aboard Caribbean Princess on a Caribbean cruise, and port calls include Key West, Freeport, Bahamas and Princess Cays. The seven-day sailing from Houston is currently available for booking with fares beginning at $­­­­689 per guest, based on double occupancy.

More information about Princess Cruises’ live entertainment and other onboard activities is available at www.princess.com/activities.

Additional information about Princess Cruises is available through a professional travel consultant, by calling 1-800-774-6237, or by visiting the company’s website at princess.com.