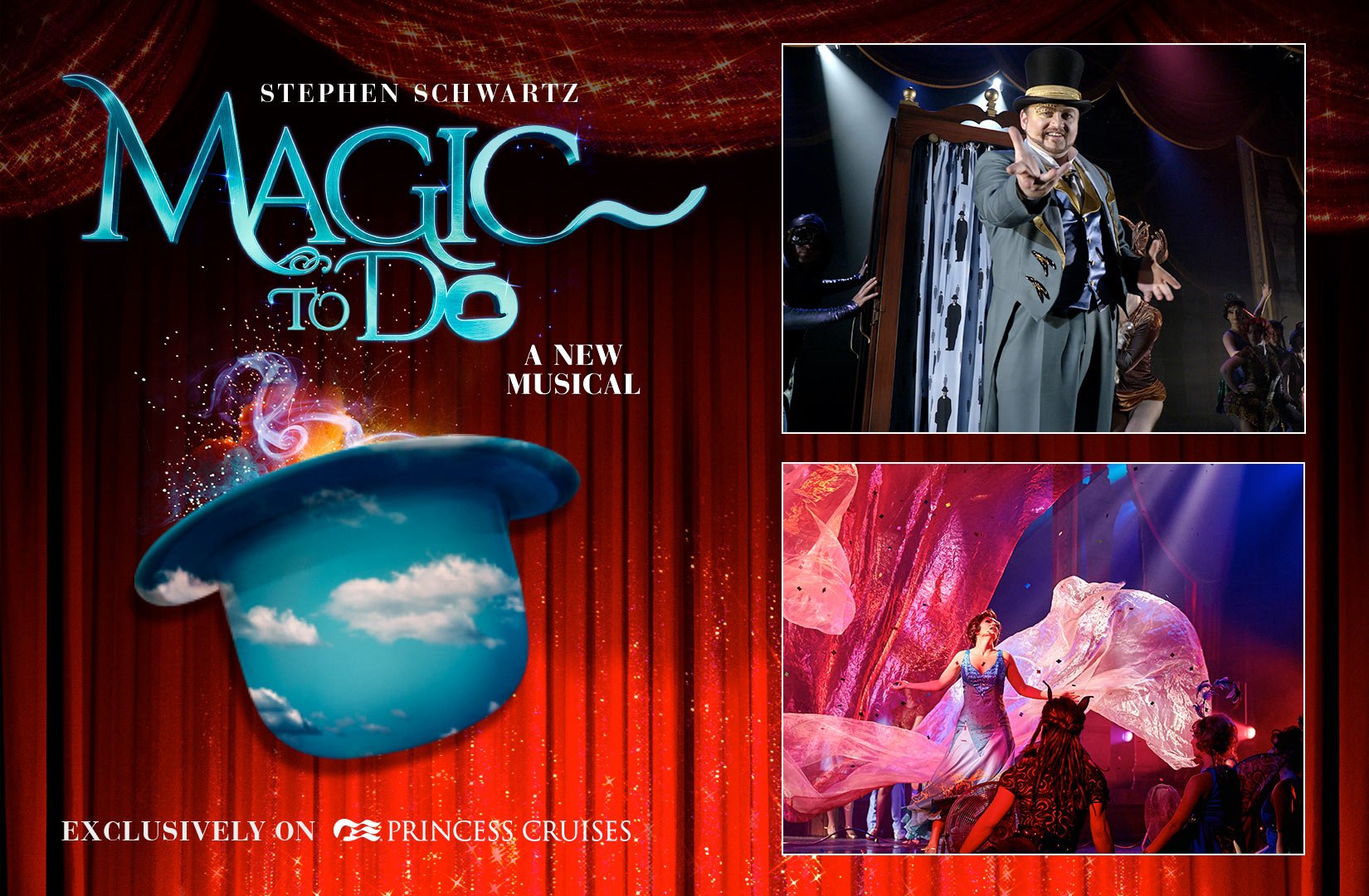 Princess Cruises raised the curtain on a new musical revue titled Magic to Do, from the Oscar, Grammy and Tony award-winning composer ofWicked, Pippin and Godspell Stephen Schwartz. The show, a cruise industry first, premiered today aboard Crown Princess to rave reviews at a special event with Schwartz and the show’s creative team at the Port of Los Angeles.

Magic to Do, Schwartz’s first production for a cruise line, celebrates his lifelong fascination with magic and combines thrilling illusions with some of his most famous songs, such as Magic to Do from Pippin andDefying Gravity from Wicked. The show also includes a brand new song written exclusively for Princess called A Little Magic. Brought to life by a vibrant cast, imaginative costumes and make-up, stunning scenic designs and baffling illusions Magic to Do is now running in the Princess Theater aboard Crown Princessand debuts aboard Ruby Princess and Emerald Princess in late fall.

This new relationship with such a major creative talent from Broadway and Hollywood includes a multi-year collaboration to oversee the creative development of a total of four new musicals to debut across the fleet over the next several years. This adds to the cruise line’s “come back new” brand promise, designed to elevate the onboard guest experience resulting in more transformative moments, lifetime memories and meaningful stories to share from a cruise vacation.

“Working with Stephen and his creative team on this brand new show for Princess Cruises has been an incredible honor and such a collaborative effort with our entertainment team,” said Adrian Fischer, vice president, entertainment experience for Princess Cruises. “Magic to Do can only be seen on a Princess cruise and we’re thrilled to offer our guests this exclusive, musical, magical experience created by an award-winning team.”

During his 40-year entertainment career, Schwartz has won four Grammys, three Academy Awards for “Best Song” and “Best Score” for Pocahontas and “Best Song” for The Prince of Egypt and last year received the Isabelle Stevenson special Tony Award. He is the only songwriter in Broadway history ever to have three shows run more than 1,900 performances.

“Watching the vision of Magic to Do develop over the last several months into a unique theatrical experience has been both great fun and enormously gratifying for me. I’ve been waiting for a long time for a first-rate revue of my work, and I think this clever combination of my songs with virtually all the great magic illusions in history could finally be it,” said Stephen Schwartz. “My collaboration with the talented and highly professional team at Princess has achieved something I think is special and I hope guests join me in falling under its spell.”

Schwartz brought together a cadre of Broadway and Hollywood talent to support the production through direction and design, including:

In addition, Jim Steinmeyer, the mastermind behind many of the great magic illusions over the last 25 years, created the magic experience in Magic to Do. Steinmeyer has worked with some of the greatest magicians of all time including Doug Henning, Siegfried & Roy and David Copperfield.

Theater Producer Jayson Raitt will be working closely with Schwartz and consulting on the creative development of the three additional shows.

Additional information about Princess’ new partnership with Stephen Schwartz can be found athttp://www.princess.com/schwartz.