Voted the best cruise line in the Caribbean for 12 consecutive years and the top large-ship cruise line for families, Royal Caribbean International today announced the upcoming Caribbean openings for the cruise line’s new 2016-17 Adventure Collection. Vacationers can book an unforgettable Caribbean cruise aboard 15 of the world’s most innovative and award-winning cruise ships, sailing from nine convenient U.S. homeports to 39 spectacular ports of call in 18 Caribbean countries, and Bermuda and Canada. The new Caribbean adventures will mark the Quantum class’ maiden call and season in Bermuda with Anthem of the Seas, and offers a choice of three industry-acclaimed Oasis-class ships, including the new record-setting Harmony of the Seas. Royal Caribbean’s new 2016-17 Caribbean Adventures Collection will open for booking starting March 2015.

Royal Caribbean’s new Adventure Collection encompasses the cruise line’s 2016-17 cruise vacations aboard unrivaled ships, which will sail exciting itineraries across six continents. Vacationers can choose between the industry’s newest, biggest, and best ships, which sail in the Caribbean, Europe, Alaska and beyond. On most Caribbean cruises, guests will enjoy more than 400 total acres of pristine beaches, exhilarating thrill rides and activities, and plenty of opportunities to relax under the Caribbean sun during a call at Royal Caribbean’s private island CocoCay or its exclusive beach destination Labadee. 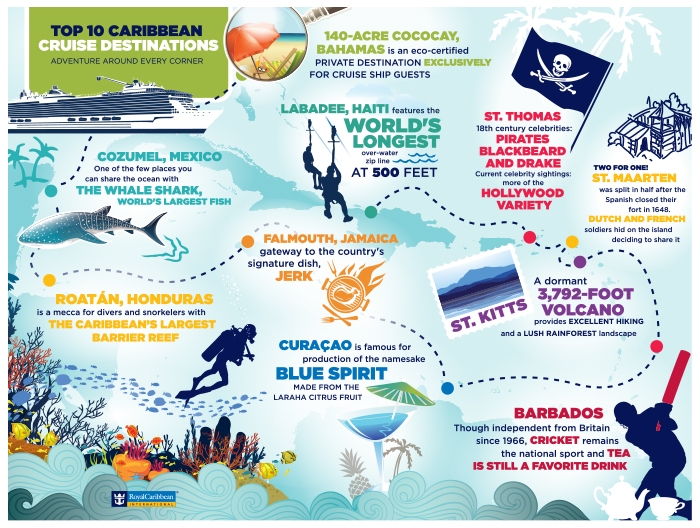 Everywhere in the Caribbean, conveniently from South Florida

Mexico and Southern Caribbean from Galveston and Puerto Rico

Royal Caribbean International is an award-winning global cruise brand with a 45-year legacy of innovation and introducing industry “firsts” never before seen at sea.  The cruise line features an expansive and unmatched array of features and amenities only found on Royal Caribbean including, jaw-dropping, Broadway-style entertainment and industry-acclaimed programming that appeals to families and adventurous vacationers alike. Onboard, guests are catered to with the cruise line’s world-renowned friendly and engaging Gold Anchor Service by every staff and crew member. Royal Caribbean has been voted “Best Cruise Line Overall” for 12 consecutive years in the Travel Weekly Readers Choice Awards and “Top Large-Ship Cruise Line for Families” inTravel + Leisure’s 2013 and 2014 World’s Best Awards readers’ survey.

Definitive resource for exclusive travel opportunities from only the world's greatest vacations . Tag @twgvacations to be featured.

An iPhone pic from our bungalow 🌴💦 smiling h

I love places that makes you realized how tiny you

Is this cave suite @mystique_hotel in Santorini no

🌈 Life in the French Polynesia 🥰 Tag someone

🌈 Can you imagine walking out to your private v

On our way to Normandy last year we stopped at thi

🏡please teleport me here for the weekend⠀ #Ka

Imagine sailing around the world and visiting thes