One of the biggest stories in the Cruise World in recent years has been the arrival of a new crop of megasuites on ships: Big, bold and beautiful cabins that can cost tens of thousands of dollars a voyage. As can be seen above in our new photo tour of the 10 most spectacular suites at sea, some of the latest cruise ship megasuites are bigger than the average American home, with multiple bedrooms, living areas with dining rooms and sprawling balconies. Sweeping views of the ocean are a given. And the pampering is world class.

As one would expect, luxury lines such as Silversea and Seabourn have been rolling out some of the most stunning (and pricey) suites at sea. But there’s also been a super-suite arms race of sorts in recent years among the big, mass-market operators such as Royal Caribbean and Norwegian Cruise Line, which are catering to an ever-broader range of customers. Indeed, Norwegian Cruise Line has become the de facto leader in giant suites, with three-bedroom “garden villas” on several ships that measure as much as 5,000-square-feet in size. 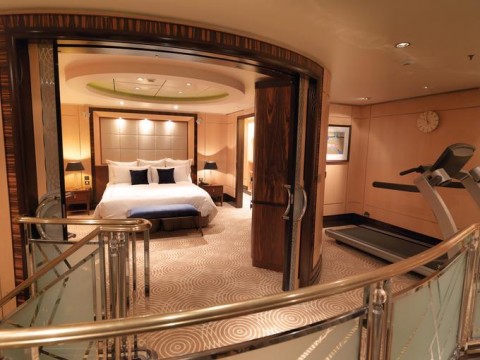