National Geographic circumnavigates the globe on a quest to find the world’s best beach cities.

Tel Aviv, Israel. Call it Miami Beach on the Med. Tel Aviv is the Dionysian counterpart to religious Jerusalem. In the “bubble,” as it’s known for its inhabitants’ tendency to tune out regional skirmishes, some restaurants, discos, and clubs are open until dawn. By day, the scene shifts to the city’s promenade and eight miles (13 kilometers) of beach literally steps from town. Head to wide and sandy Gordon Beach to sit in a seaside café or take a dip in the saltwater pool.

Barcelona, Spain. With layers of architectural wonders, cutting-edge cuisine, and buzzing nightlife, Barcelona would be a world-class city even without the eight white-sand beaches that rim its Mediterranean coastline. Accessible by metro, the nearly mile-long (1.6-kilometer-long) Barceloneta Beach—revitalized in the massive waterfront makeover for the 1992 Olympics—is one of the most popular. Hit the Beach Centre to rent a beach umbrella, chairs, or a bicycle. 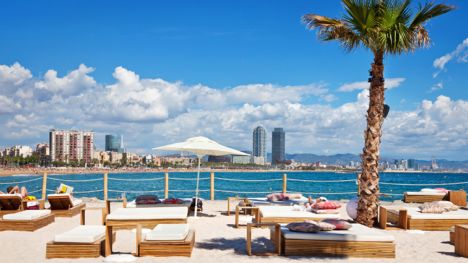