Make your way to these often-overlooked retreats for a mix of adventure, culture and relaxation.

With summer fast approaching, chances are you’re starting to fantasize about a vacation. Maybe you love the Caribbean, but you’ve visited some of the usual spots such as Negril in Jamaica and Punta Cana in the Dominican Republic, and you’re craving a still-undiscovered destination with fewer crowds. If you’re looking to pinpoint a hidden gem in the Caribbean, pack your bags for these enticing retreats.

Drive 2½ hours north of the Norman Manley International Airport in Kingston, Jamaica, and you’ll discover Port Antonio, with its jungle landscape, golden beaches and unique quality that helps it earns its nickname as “the Jamaican Riviera.” In the ’50s and ’60s, Port Antonio was a hideaway for Hollywood A-listers such as Errol Flynn, Elizabeth Taylor and members of the Rat Pack. For a bit of Hollywood glamour, check out the Geejam Hotel, which boasts well-appointed suites, a private villa collection and a state-of-the-art recording studio, where legendary musicians, including John Legend and Alicia Keys, have recorded tracks. Enjoy authentic Jamaican cuisine and ocean views from the Bushbar. Alternatively, the Trident Hotel offers 13 oceanfront villas, the Veranda restaurant and Mike’s Supper Club, which features Japanese- and Jamaican-inspired cuisine. You won’t find heavy tourist crowds in Port Antonio, but rather unspoiled waters for swimming, snorkeling and kayaking, along with attractions and points of interest such as the Blue Lagoon, the Rio Grande River and Somerset and Ranch waterfalls.

You’ve likely never heard of Eleuthera, but there’s a reason its earned critical acclaim as a top-secret island. This secluded retreat is touted as the “Pineapple Capital of the World” and is home to the Glass Window Bridge, where you can take in contrasting views of the Atlantic Ocean and the Caribbean Sea. Visit pineapple farms and historic sites like the Haynes Library during your visit. As for lodging, consider The Cove, which offers 57 rooms spread over 40 lush acres, as well as private beaches. Afterward, savor a Pineapple Smash cocktail at The Point Bar as the sun sets. Another option: the French Leave Resort, which boasts 12 oceanfront boutique villas.

This tiny island in the northeast Caribbean near St. Maarten boasts four main villages, has a population of just over 1,800 residents and delivers plenty of fun. Hike the island’s original stone paths through the rainforest. It’s worth it to make it to the top of Mount Scenery, the highest peak on the island. Explore the tide pools and historic ruins along the way. Saba is also known for its excellent scuba diving, hiking, deep- sea fishing and snorkeling. It’s also a top destination for serenity-seekers with accommodations that range from intimate boutique hotels and eco-lodges to cottages to luxury villas. What’s more, you won’t find traffic lights or chains like McDonald’s or Starbucks in Saba. Plus, Saba’s lobster is legendary. You also won’t want to miss sampling Saban Lace or Saban Spice, rum-based liquors found only on the island.

The Abacos comprise a group of islands and cays that form a 120-mile-long chain that extends over 650 square miles. The Abacos are renowned for boating, sailing and fishing. Powdery, white-sand beaches are inviting as are the turquoise waters. Kayak, enjoy parasailing, snorkeling, lobster diving or simply relaxing along the beach. Stay at The Abaco Club on Winding Bay, for first-class pampering in a relaxed environment. You’ll never forget the sunset from the pool deck at The Cliff House restaurant. Plus, golfers will delight in the club’s renowned courses. If you’re a lighthouse enthusiast, visit Hope Town, which boasts Elbow Cay Lighthouse, one of the last manually operated lighthouses in the world.

You might have heard of Nevis’s sister island, St. Kitts. But Nevis is just as alluring. Part of the Leeward Islands of the Caribbean, Nevis is just 36 square miles long and is home to some 12,000 residents. Mount Nevis, a 3,232-foot high dormant volcano, is an attention-grabber and is consistently surrounded by mist. The antithesis to big-city life, Nevis features rolling countrysides peppered with wild donkeys, goats, chickens, cows and even green vervet monkeys. Here, the vibe is mellow and the beaches abundant. Surf, jet ski, fish, enjoy a sunset cruise, horseback ride on Pinney’s Beach or stroll along the shore. Hikers and outdoorsy types will also love climbing to the peak of Mount Nevis. On the waterfront, near the heart of Charlestown, the nation’s capital that was founded in 1600, sits Hamilton House, a Georgian-style building that is the site where Alexander Hamilton was born and raised, and today contains the Alexander Hamilton Museum. After touring the museum, stop at Sunshine’s Beach Bar & Grill, which is famous for its Killer Bee cocktail. As for accommodations, choose among historic inns, villas, the island’s five-star Four Seasons outpost and the award-winning Nisbet Plantation Beach Club, the only historic inn on the shore.

Guadeloupe a picturesque tropical retreat, features two isles: Basse-Terre and Grande-Terre. Pointe-à-Pitre is Guadeloupe’s largest city, with more than 130,000 residents, and is filled with a lively marketplace brimming with stalls, along with ornate French architecture. If you’re looking for a place to lay down your towel, make your way to Basse-Terre’s La Grand- Anse, the longest beach in Guadeloupe that’s also touted as one of its best. Meanwhile, at the Jardin Botanique de Deshaies, there’s an array of water lilies and unique local flowers.

Guadeloupe is also at the forefront of ecotourism. The Tendacayou Ecolodge & Spa sits in the protected wilderness of the Morne Bois d’Inde rainforest, and offers panoramic sea views. During your visit, check out the spa, which offers a pool and waterfall. If you want more activity, scuba dive, snorkel, cruise, surf, take the kids to the aquarium or go whale watching. Another option: La Creole Beach Hotel & Spa in Grosier, Guadeloupe, which sits in the heart of a tropical garden, among palms, hibiscus trees and bougainvillea near the beach. At the hotel, you can enjoy nightly music and a special jazz session once a month, where some of the best talent on the island comes together to perform. 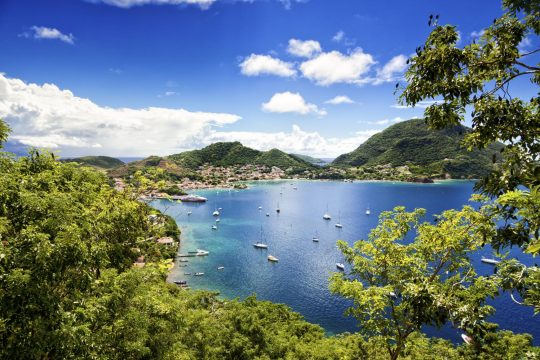